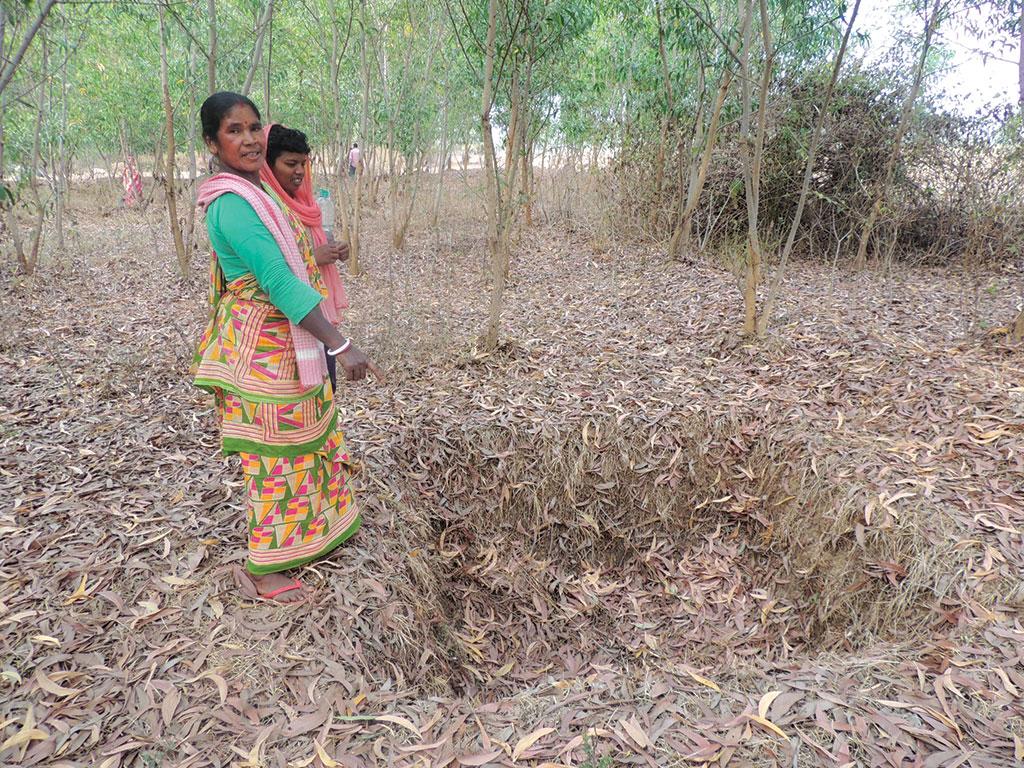 A hapa helps catch and harvest water. One can be seen at Birbandh village in West Bengal’s Bankura district, where the water table rose by 1.7 m in 2018-20 (Photograph:Jayanta Basu)

Located in the driest parts of West Bengal, Birbandh and Kawatanga villages of Bankura district could barely grow any crops a decade ago. Poverty was acute and many had to migrate to nearby towns to survive by working as unskilled labourers.

Though the area has an average annual rainfall of 1,200-1,300 milimetre (mm), the undulating terrain led to a quick drain-out and, hence, minimal water retention on the surface or underground. The scenario changed after the launch of Usharmukti (“Freedom from water scarcity”) programme, a collaboration of the state government and civil society organisations, to implement the Mahatma Gandhi Rural Employment Guarantee Act (MGNREGA) in six districts in the drier central and southern parts of the state in 2017-18.

Under the initiative, the two villages, started managing their watershed areas, with slight modifications customised for local requirements. The basic principle, however, was the same — holding the water flowing from upper terrain (called tanr in Bengali) in middle terrain (called baid) and not allowing it to drain out.

In Birbandh, 25 water harvesting structures have been built till date along the path of runoff to arrest the flow. A “30x40” model has been used under which water flowing from higher land gets trapped after 30 feet (ft) over a horizontal spread of 40 ft. “The model has been evolved based on our works in various parts of the state and country, and it is working very well here. We try to catch the flowing water around 30 m from the point where runoff starts as much water gets lost after that,” says Rajshekhar Bandopadhyay from Pradan, a non-profit assisting in the implementation of the project in the area. Another 77 water harvesting structures are planned in the village, he said.

In Kawatanga, the model is slightly different. “Most of the cultivable area around the village was rendered uncultivable due to deposition of soil eroded from the hillocks through runoffs during the monsoon,” said Dowram Hembram, a resident who used to migrate to work as unskilled labour but now cultivates in forestland.

Almost all the families in both villages have job cards and work under MGNREGA programme, and hence the rate of migration has plummeted sharply, say village residents. Overall, Rs 14 lakh have been spent so far to build the water harvesting structures in both villages, according to the local administration. 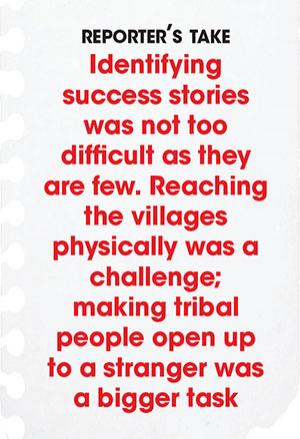 As a result of MGNREGA works, the groundwater levels have risen in both the villages, said residents. The rising levels and longer retention of water in local waterbodies are testimony to that. Official figures substantiate the claim.

The water table is mapped at the gram panchayat level under the project. For the entire Bankura district, the rise is in the range of 0.55 m in the pre-monsoon and 0.75 m in the post-monsoon period, which is about a third compared to Birbandh and Kawatanga.

“As per my study, the non-monsoon water demand in the state is set to increase by 19 per cent in 2051 compared to 2021 in Bankura. Hence, such watershed management projects are important,” says Kalyan Rudra, chairperson of the West Bengal Pollution Control Board.

This water availability has allowed the two villages to cultivate crops in two cycles a year. Since earlier men used to migrate to work as unskilled labourers, women, assisted by civil society organisations like Pradan, were in the forefront in the Usharmukti project in both the villages. They are also the ones who now practise farming.

“When we decided to give the water harvesting retention projects a try after Pradan people convinced us, many men in the village ridiculed us,” said Shefali Mandi, a woman in her thirties and one of the initiators of the watershed project in the area.

“I have gifted a chhobiwala mobile (a mobile with camera) to my husband,” she proudly says — a rare event in the poor tribal community, where women are meant to be looked after.

Mandi now grows brinjal, watermelon, mustard, bitter gourd, red lentil (masoor) and paddy, and saves around Rs 10,000 per month in the peak season. She also pays Rs 3,000 a month for her son’s education, including the hostel fees.

“The change is unbelievable compared to the situation a decade ago, when poverty and threat from the Maoists were the order of the day,” said Prasun Karba, a local panchayat worker.