There are parts of Batka Phala and Paldewal villages in Dungarpur district that belie they are in the dry and arid Rajasthan. The greenery around Boladhara pond in Batka Phala and the dense vegetation surrounding the anicut (a masonry check dam) on the Godhal river in Paldewal gives the impression that the area gets ample rain, or is watered by perennial rivers.

The reason behind the greenery becomes evident as one drives towards these villages in Dungarpur district. Bordering Gujarat, the district is dotted with hills of the Aravalli mountain range. At numerous places, the slopes of the hills have rectangular and semicircular trenches, which to the layperson might appear as peculiar geometric patterns.

But these are actually trenches dug under the Mahatma Gandhi National Rural Employment Guarantee Act (MGNREGA) to prevent runoff and allow water to percolate. Even the pond and the anicut at the villages are MGNREGA products, as are many other water harvesting structures.

Though the district receives a reasonable 710 milimetres (mm) of average annual rainfall, it has been drought-prone because the hilly topography would aid runoff and the rocky terrain does not allow water to percolate. The water conservation structures have changed the situation.

“The water levels in the vicinity of the anicut have gone up from 45 metres (m) below the ground to 30 m in the past few years,” says 30-year-old Amrai of Paldewal. “The anicut has also saved us from unusual floods, at least thrice since 2006, when it was built,” she adds. The anicut has a capacity of 4,000 cubic metres and serves a command area of 120 ha, as per the district data. 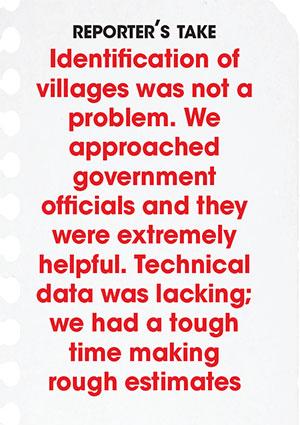 The pond in Batka Phala, too, has water throughout the year. Spread over 2 km, it has lately started attracting migratory birds. The authorities plan to develop it a tourist spot.

“Farmers in the village now use the pond water to grow almost three crops a year,” said Suresh Ola, district collector. While earlier they cultivated mostly water-efficient crops like gram and sorghum, now they are growing rice, wheat, mustard and vegetables.

Pramod Koted, whose wife is the sarpanch of the village, says his father was a MGNREGA worker and paid for his education from his wages. Koted holds BA and B Ed degrees.

Government data for the district shows that the groundwater has remained almost constant over the past decade despite a 22 per cent reduction in rainfall.

The local government is now finding convergence of MGNREGA with other schemes to continue providing employment to the village residents as dependency on MGNREGA has increased.

They are also investing in more water harvesting structures to increase the cultivable area. One such check dam was being built in BatkaPhala when Down To Earth visited the village.

The site was dominated by women and all agreed to the ease of availability of water for agriculture as well as their daily requirements because of MGNREGA.