On December 26, 2016, the Nairobi City Water and Sewerage Company Ltd first announced “temporary” reduction of water supply, and the situation has only got worse since then 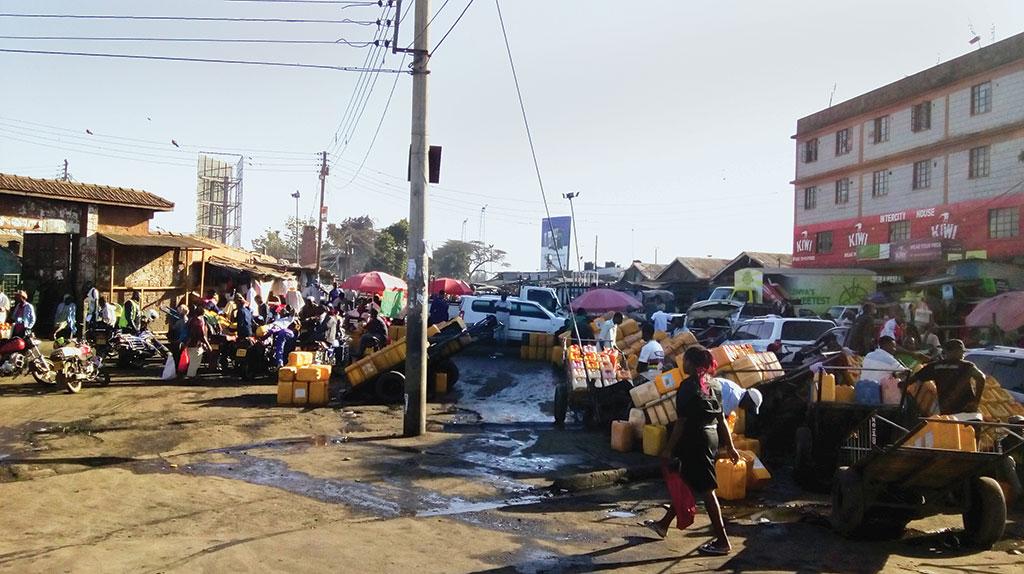 Nairobi residents are forced to buy water from private vendors because government supply has been rationed since 2016 (Photo: Subhojit Goswami)

Look, what we have done to the land of Maathai,” says Jamie, referring to the legendary Kenyan environmental activist Wangari Maathai who worked to save Nairobi’s Karura forest, and pointing at villas that have been built on forestland. Jamie, an Uber driver who lives in the Upper Hill district of Nairobi, says water is a prized commodity in the city. Much of the shortage is attributed to deficient rain and dwindling levels in reservoirs. “They have made huge profits by selling the villas, but can they buy rain with money?” asks Jamie .

While Cape Town, South Africa, has been in the news for its water shortage, Nairobi has not got attention despite facing a water crisis since 2016. It was on December 26, 2016, that the Nairobi City Water and Sewerage Company Ltd (NCWSC) first announced “temporary” reduction of water supply, and the situation has only got worse. Currently, NCWSC is supplying 0.5-0.53 million cubic metres of water a day—less than 70 per cent of the total demand, which is 0.76 million cubic metres.

Nairobi receives its water from four sources—Thika dam supplies 0.43 million cubic metres (m3) a day, Sasumua dam 52,800 m3, Ruiru dam 22,800 m3 and Kikuyu springs 4,000 m3. “The Thika dam, which supplies over 80 per cent of Nairobi’s water demand, is currently at 30-35 per cent of its holding capacity. The city usually receives rain for seven months—March-June and October-December—but since 2016, it has been receiving rain for only two-three months. We are forced to ration water through an equitable distribution programme,” says Maurice W Kihoro, a corporate affairs department official at NCWSC.

However, there are doubts as to how “equitable” the water rationing programme is. Luke, a hairdresser, says that some neighbourhoods get continuous supply of water, while others only twice a week. Kihoro counters, “We give 24x7 water to three establishments—hospitals, airports and army barracks. Those houses that are linked to the same supply network get water throughout the week.” But even the reduced quantity of water is not reaching the homes of many Nairobians. The reason, as Kihoro explains, is the puncturing of supply pipes by people to steal water. Not only is the city losing water due to leakages, it is also causing revenue loss, he says.

There is also a wide network of water cartels in Nairobi. According to a January 2018 investigation by Nairobi-based media house Soko Directory, 40 per cent of water cartels in Nairobi do not own any borehole but divert NCWSC pipes to fill their tankers and sell water at their own price. Most of the water channels in Pangani, Mlango Kubwa and Eastleigh districts in Nairobi have been either diverted or hijacked along the way by cartels. The situation is precarious in informal settlements where pipes are diverted by these vendors to create their own watering points.

These cartels are draining Nairobians of their hard-earned money, especially the low-income groups. Benazir Omotto, an integrated urban environmental planning officer with the Umande Trust in Kibera slum, told Down To Earth that people living on less than 100 Kenyan shillings (KSh) a day (1 KSh equals R0.64) have to pay 20-40 KSh for 20 litres of water. This is 300 times costlier than the piped supply.

“The water cartels are messing with the supply system,” says Kihoro. Some private water companies have got the licence from the government to dig boreholes and sell water, but there are people who circumvent laws and dig boreholes illegally, he adds. Last October, Nairobi Governor Mike Sonko announced that such cartels will be brought to book. “We are working with county governments to reign them in. Whenever we catch culprits, we deal with them appropriately by sentencing them to prison and penalising them with hefty fines,” claims Kihoro.

On February 26, NCWSC declared that water rationing will continue till 2026, when construction of two more dams will be completed. Kihoro says the dams will have “twice the capacity of the Thika Dam, which holds about 70 million cubic metres at full storage”. So, will the shortage continue till 2026? Kihoro assures that the situation will improve when the Northern Water Collector Tunnel project is completed in December 2018. This tunnel will collect water from the Maragua, Gikigie and Irati rivers at their source in Aberdares, located north of Nairobi, and divert 0.14 million cubic metres of water a day to the Thika Dam for use in Nairobi.

However, Ezekiel Muigai of the Kenya Meteorological Department, warns that worst is yet to come. “Large parts of Kenya, especially the eastern region, will experience depressed rainfall in the first three months of the rainy season (March-May 2018),” he says. According to Muigai, year-to-year variability in rainfall is huge, making droughts a common occurrence in the country.

(This story was first published in March 16-31 issue of Down To Earh under the headline 'Running out').