Rivers have historically formed the bedrock of several civilisations, but have also been used to divide land and form borders 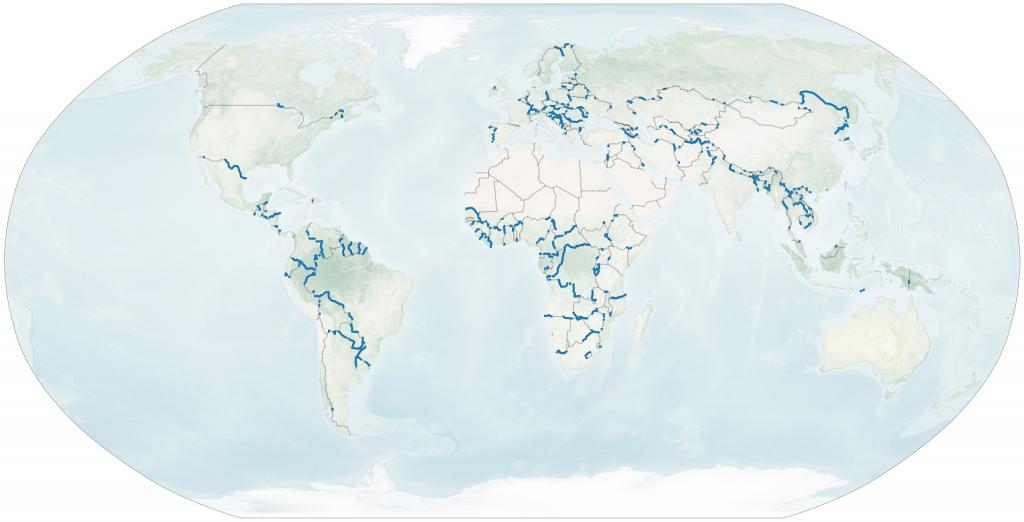 The map highlights in blue all of the international borders defined by large rivers. Credit: Earth Observatory, NASA

Rivers have historically provided humans with fresh water, fertile land and food and have, thus, formed the bedrock of several civilisations. A new database, however, quantified how rivers were used to divide land and form international, national and local borders.

Rivers make up 23 per cent of international borders, 17 per cent of the world’s state and provincial borders and 12 per cent of all county-level local borders, according to the Global Subnational River-Borders database.

The database — initially published in the Water Policy journal May 6, 2020 — found nearly half of South America’s borders are made by rivers, the greatest proportion of international borders made like this.

Brazil, Colombia, Venezuela, Suriname, Guyana, French Guiana, Bolivia, Paraguay and Uruguay all have lengthy international river borders. North America also has sizable percentages of borders made by rivers (28 per cent), followed by Africa (26 per cent) and Europe (21 per cent).

The Rio Grande river — that separates Mexico and Texas, United States — accounted for much of the percentage for North America.

In Africa, rivers served as borders for several countries. This includes Benin, Nigeria, Senegal, Mauritania and Niger in west Africa; the Central African Republic, the Democratic Republic of the Congo, Tanzania and Mozambique in central Africa; and Botswana, Zambia, Zimbabwe, and Namibia in southern Africa.

Spain, Portugal, France, Germany, Poland, Norway, Bosnia, Romania and Ukraine are among the countries in Europe whose borders are defined by rivers, the database showed.

These patterns were not random, explained Laurence Smith, geographer at Brown University, US who, along with the help of Sarah Popelka, a student at University of California, Los Angeles, created the database.

The continents where European powers established colonies and extended great influence tended to have more borders defined by rivers as European explorers, cartographers, politicians and diplomats found rivers to be a convenient way to divide territories.

Asia, however, had fewer river borders (16 per cent), compared to other continents as European influence there was limited. This was with the exception of south Asia, where such influence was significantly prevalent until the 20th century.

This made it possible to identify and map political borders at national and sub-national scales. The researchers counted 219 country pairs, 2,267 state or province pairs and 13,674 county pairs joined by rivers.