As rainfall decreases over Charkhi Dadri and Jhajjar districts in Haryana, villages are digging deeper for water and repeating a vicious cycle 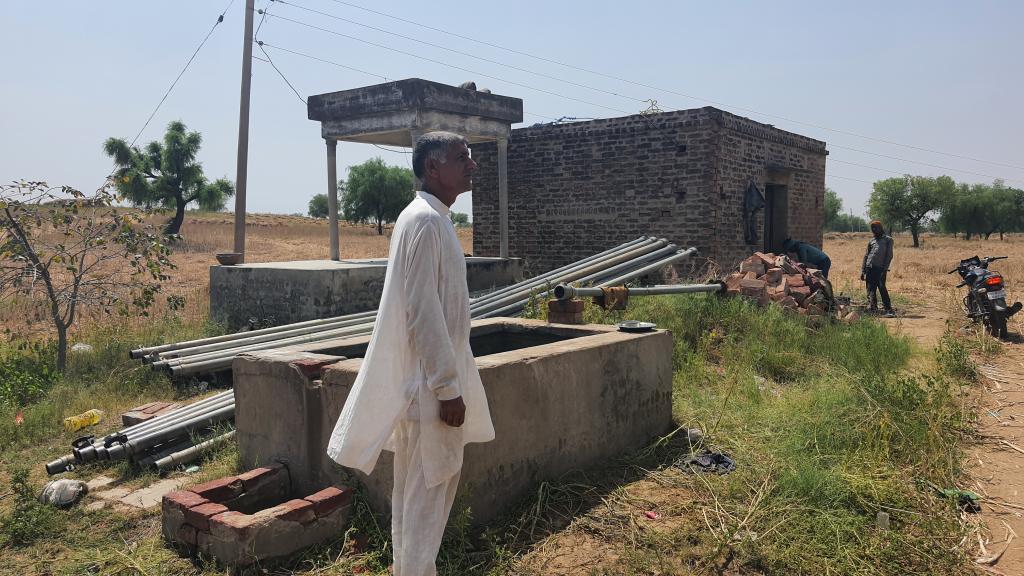 Gothra village is located in Charkhi Dadri, Haryana’s newest district on the state’s border with Rajasthan. It looks like any other dusty village in north India. Except that it is suffering extreme water shortages which, if not controlled, will soon make the village a desert.

The village has fallen prey to excessive salinity in its groundwater, caused by lack of recharge due to decreasing rainfall and consequent extreme groundwater extraction.

All this has led to the village being caught in a vicious cycle which is now so bad that it neither has potable drinking water nor water for its crops.

Gothra’s troubles started in 1995. That was when its rainfall patterns changed.

“The amount of rainfall decreased 31-40 per cent with delayed onset on monsoon in the south-western part of Haryana (between 1946 and 1996),” Study on south-west monsoon rainfall characteristics in  arid zone of Haryana, a research by scientists from the department of agricultural meteorology at CCS HAU, Hisar, noted in 2002.

“A significantly decreasing trend in southwest monsoon rainfall has been noticed in Ambala, Panchkula, Kaithal, Panipat, Bhiwani and Charkhi Dadri district,” according to the India Meteorological Department, Pune.

The increase in salinity happened because the decrease in rainfall caused less recharge.

Ninety-nine per cent of the land in Charkhi Dadri is under cultivation. Some 122,358 of 136,575 hectares are cultivated, according to the district environment plan report. The main source of irrigation are rainwater and groundwater.

“I have 10 acres of farmland in which I grow produce wheat and mustard in the rabi season and bajra (pearl millet) and guar (cluster bean) if it rains in the kharif season. For many years, when it did not rain, the fields were left empty. Our village once had a good yield of gram. But this is no longer the case,” Kumar said.

Jagwant is a Gothra resident who spends time with other elderly men of the village smoking a hubble-bubble.

“As the number of families grew in the village, the borewells increased. In the last 15 years, sweet water has run out. It is just salt water now. There are only one or two borewells in the village where there is a little less saline water,” he said.

He said he himself had installed his own submersible borewell in 2003 and since then, he has been getting water at 84 feet. But it is so saline that it is not beneficial for crops.

Gothra is in the ‘over-exploited’ category as far as groundwater is concerned, according to the Central Ground Water Authority. This means that more groundwater is being drained out than necessary.

The groundwater in Gothra continues to fall, according to the Haryana Water Resources (conservation, regulation, management) Authority.

The situation is so bad that farmers in the village have a choice: Grow crops with saline water or not grow them at all.

“The rain is uncertain and the groundwater has decreased. The water is so saline that crops cannot be grown with it. We are able to sustain farming only by using urea, di-ammonium phosphate and irrigation water from outside Gothra at the rate of Rs 100 per hour,” Sandeep Kumar, another resident of Gothra said.

Sher Singh, a 70-year-old said the water from the borewell in his farm was so salty and polluted that the crops of gram and wheat got infected with fungus. “I have no hope left for farming in Gothra,” he said.

Sandeep agreed. “I have a 250-foot borewell that helps irrigate my two acres of farmland. During the summer, we receive power supply. In such a situation, irrigation cannot be done properly. Thus, farming remains nominal,” he said.

Om Prakash, who lives in Khanpur Khurd in the neighbouring Jhajjar district, said he had 19 acres of farmland, which could not be cultivated without water.

“I decided to build a borewell. This was two decades back. We reached absolute saline water at 1,020 feet. It irrigated my fields for two years, but nothing valuable was produced. I has spent Rs 600,000 and was ruined. No one had bored so deep in the villages around. That is when I started to be cited as an example,” he said.

There are also two thermal power plants near Khanpur. Om Prakash’s land was acquired by these due to which he got some of his money back. But he has not been able to recover from the financial shock till date.

Khanpur has a canal which has no water. Its residents thus continue to bore for saline water. Groundwater was available in the village at 3.75-12 feet back in 2010, which has now reached 50 feet.

The groundwater in this part of Haryana continues to decline. However, Surendra said the floods of 1977, 1995, 2011 and 2021 had prevented Gothra from becoming a desert till now.

But nobody is sure what lies ahead.