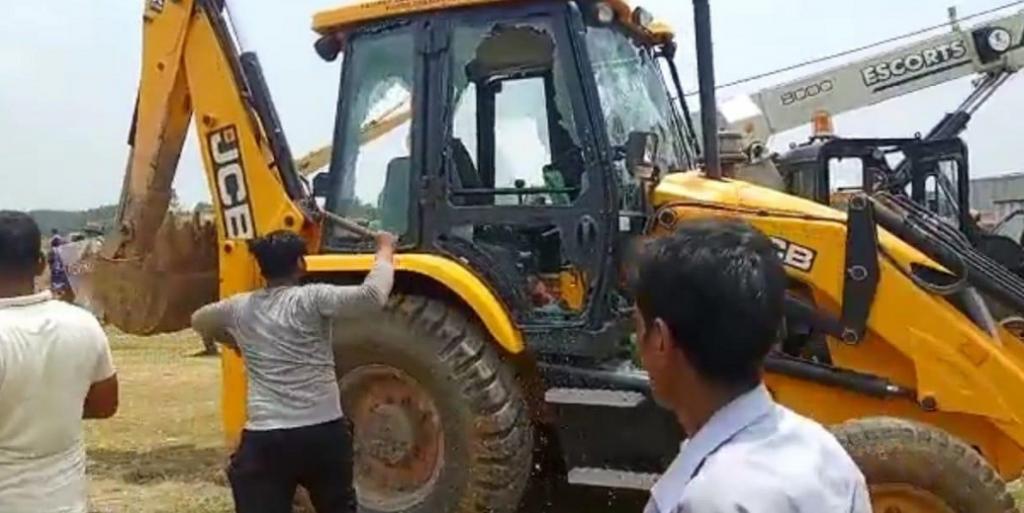 Protests against a project to divert water from a river near Odisha’s Bhitarkanika National Park turned violent August 12, 2021, with the protesters ransacking the construction site.

A large number of residents from villages on the banks of the Kharosotra river violated prohibitory orders and marched to the project site at Bharigada village.

They damaged several vehicles, a diesel oil tanker, an ambulance, three earth-moving machines and camp offices of the Rural Water Supply and Sanitation (RWSS) at the project site. They also attacked the police, government and RWSS officials.

Hundreds of villagers, both men and women, gathered at the project site. They were armed with bamboo sticks and wooden planks.

“They shouted slogans against the government and the project, before going berserk,” Sandhyarani Beuria, the sub-divisional police officer of Kendrapara told this reporter. Some 16 platoons of police had been deployed at the spot to maintain law and order, she added.

“We are determined to intensify our protest if the state government does not scrap the project,” Bidhan Das, the secretary of the Kharosotra River Bachao Samiti, said.

The government had already sensed that people in the area had been restive. It had clamped prohibitory orders in the Bharigada and Barunadiha Gram Panchayats of Rajkanika block and Balakati Gram Panchayats in Aul block of Kendrapara district to speed up the project work without any hindrance.

The Rs 754-crore mega drinking project is backed by the state government. It envisages diverting water from the Kharosotra in Kendrapara district to 0.5 million people in neighbouring Bhadrak district.

These people live in 91 Gram Panchayats across four blocks in Bhadrak. The water is being diverted for drinking purposes.

But locals say the project will destroy agriculture in 220 villages on the river as it will dry up. Some 0.4 million people live in these villages spread across the Aul and Rajkanika blocks of Kendrapara.

“The government should first build a barrage on the river to store the water before diverting the river for this project,” Debendra Sharma, the convener of Kharosotra River Bachao Samiti, said.

Sabita Baraj, the joint secretary of the Samiti said the project was a ploy to divert water to multinational companies and big business houses to run their plants and industries.

Hemant Rout, an environmentalist and the secretary of Gahirmatha Marine Turtle and Mangrove Conservation Society, said the project would cause an ‘ecological disaster’ in the nearby Bhitarkanika National Park

The salinity level will increase after the diversion of the water from the river. Farmers will be the worst sufferers as they will not be able to continue irrigation activities smoothly. The area’s water-based biodiversity, including fisheries will face extinction.

He noted that it was illegal on the part of the state government to launch the project without obtaining environment clearance and without the approval of the National Wildlife Board.

He added that the human-crocodile conflict in riverside villages would increase as more crocodiles would stray into the Kharosotra from the waterbodies of Bhitarkanika due to an increase in salinity level.

However, state officials denied these allegations.

“The proposed project will not dry the river as we will lift only surplus water for the project through pipelines,” Basant Kr Nayak, the executive engineer of RWSS, Kendrapara, said.

Niranjan Behera, the sub-collector of Kendrapara alleged that some persons from the Rajkanika and Aul blocks had been opposing the project due to ‘ulterior motives’. This was why the prohibitory orders had been imposed in the first place.

Behera said stern action would be taken against the persons who ransacked the construction site and assaulted police and government officials by violating the prohibitory orders.

Narasingh Bhol, the inspector-general of police (Central Range), Sandeep Sampat Madkar, the  superintendent of police, Kendrapara and other senior officials are camping near the project site to maintain law and order.