All four districts of the northeastern state are resilient to drought, but that’s not the case with any of the districts in Rajasthan and Chhattisgarh, says a study

If a drought strikes Rajasthan or Chhattisgarh, the states would witness large-scale devastation as their water and ecological systems are ill-prepared to deal with such conditions. On the other hand, Sikkim is very well-prepared to deal with drought conditions. A recent study published in the Journal of Hydrology found that while all the four districts of Sikkim are resilient to drought, making the state absolutely prepared to tackle the calamity, no district in Rajasthan or Chhattisgarh is tough enough to face a drought.

The study cites that Rajasthan is vulnerable to droughts because of its naturally dry conditions and lack of vegetation. But, it doesn’t mention any reasons for Chhattisgarh not being drought-proof.

Resilience is defined as the ability of a system to undergo minimal changes in structure and behaviour under changing conditions. In the current case, drought resilience can be described as the ability of a land area to withstand dry conditions, resulting from decreased precipitation (rainfall, snowfall and hail) and loss of moisture from the top layers of soil, and keep supporting the growth of eco-systems.

The study calculates drought resilience by taking into account the eco-system water use efficiency (WUEe) of different districts and comparing it under dry conditions and its overall mean value. WUEe can be defined as the ratio of the productivity, in terms of vegetation, of the districts to the amount of water lost to the atmosphere through evaporation. The scientists have formulated an index of drought resilience (Rd) which is defined as the ratio of the value of WUEe in the driest year for a district between 2000 and 2014 to its mean value in that period. This index tells how well a district is naturally prepared to fight dry conditions which eventually lead to drought. 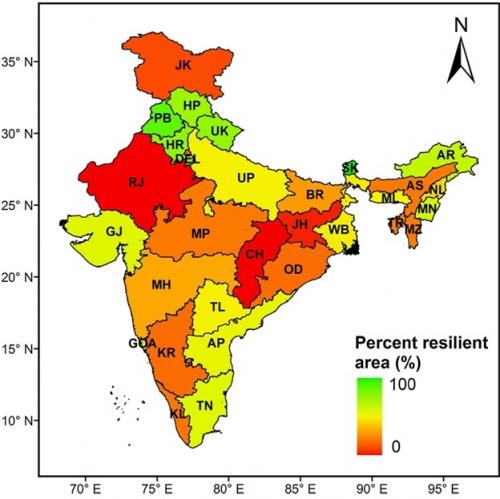 But, Kerala came out as a weird anomaly. Despite 30 per cent of its land covered with forests, 81 per cent districts are not resilient to drought. Similarly, Karnataka’s 83 per cent districts are not ready to handle the natural calamity. On the other hand, sub-Himalayan states like Punjab have 88 per cent of districts resilient to drought and showed a general high resilience to drought. Haryana (76 per cent), Uttarakhand (75 per cent) and Himachal Pradesh (73 per cent) too have a major number of districts that can tackle the calamity pretty well.

The study also found that temperate climate was a little better suited to deal with aridity as 42 per cent of districts were found to be resilient to drought as compared to tropical (32 per cent) and dry (38 per cent) climatic conditions. One can also observe that in a state like Haryana, which has the least amount of forest cover (3.59 per cent) and is mostly dry, most of the districts (76 per cent) were drought resilient—third highest in the country after Sikkim and Punjab.

But, much more research is required to ascertain as to why some districts are more resilient than others.