The state of sanitation is deteriorating in Sub-Saharan Africa, with countries switching from open defecation to unsafe toilets 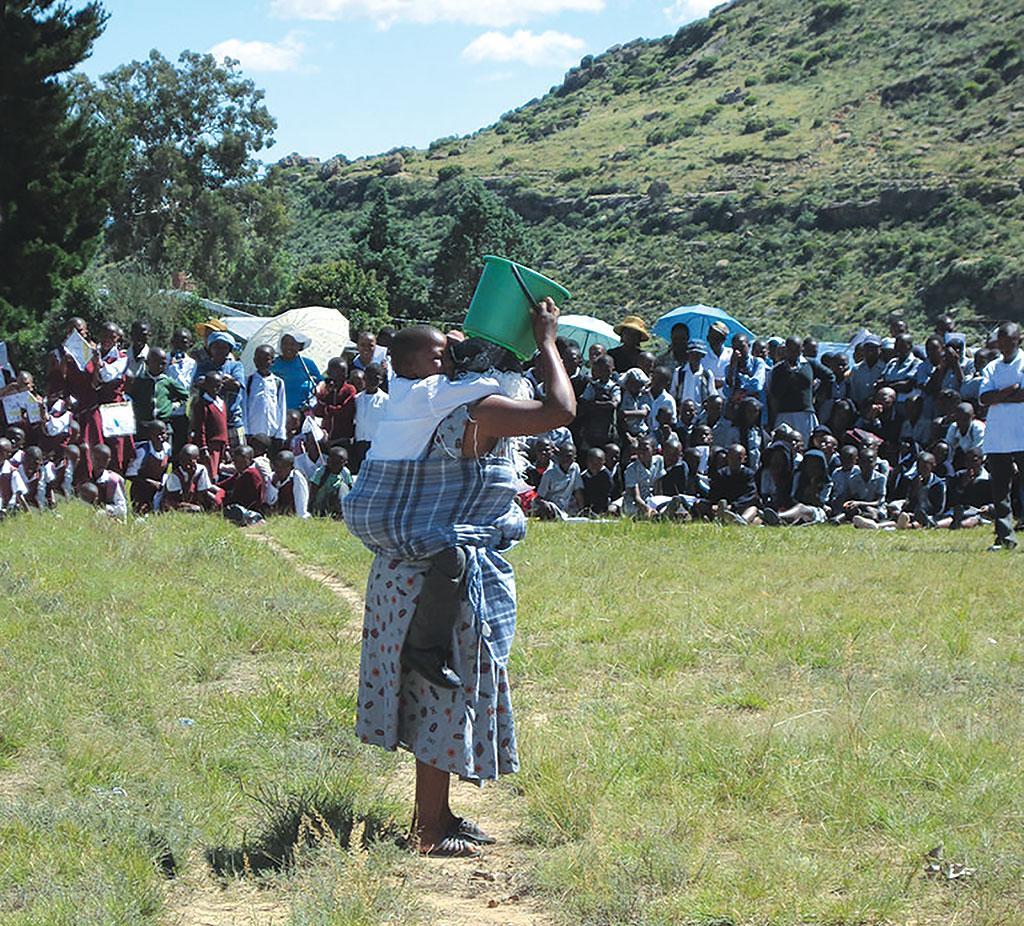 Sub-saharan Africa is home to about one-fourth of those defecating in the open worldwide.

Under the Sustainable Development Goals, set by the UN, countries must provide adequate and equitable sanitation and hygiene for all and end open defecation, paying special attention to the needs of women and girls and those in vulnerable situations by 2030. But this is a gargantuan task given that today, some 2.4 billion people, or one in three across the world, are struggling to stay well, keep their children alive and work their way to a better future because they have nowhere safe to go to relieve themselves; some 892 million of them defecate in the open for want of a toilet. In fact, some estimates show that more people today have mobile phones than access to toilets.

The problem is particularly acute in Sub-Saharan Africa (see 'The slow walk to...'). The region, as the name suggests, lies south of the Sahara desert and has been an area of concern for global communities as its countries and island states are among the poorest and least developed in the world; half of the region’s population live on less than a dollar a day. Estimates show that the region is home to about one-fourth of those defecating in the open worldwide. On an average, these people spend some 2.5 days worth of time in a year trying to find a private location to defecate, according to a 2012 assessment of 18 countries by the World Bank under its Water and Sanitation Program (WSP) (see 'Cost of finding...'). This results in losses to the tune of US $500 million a year to these countries, which account for half of the population in the continent. Women shoulder a huge proportion of this cost as they spend additional time finding a safe place for urination or accompanying young children or sick or elderly relatives to relieve themselves. 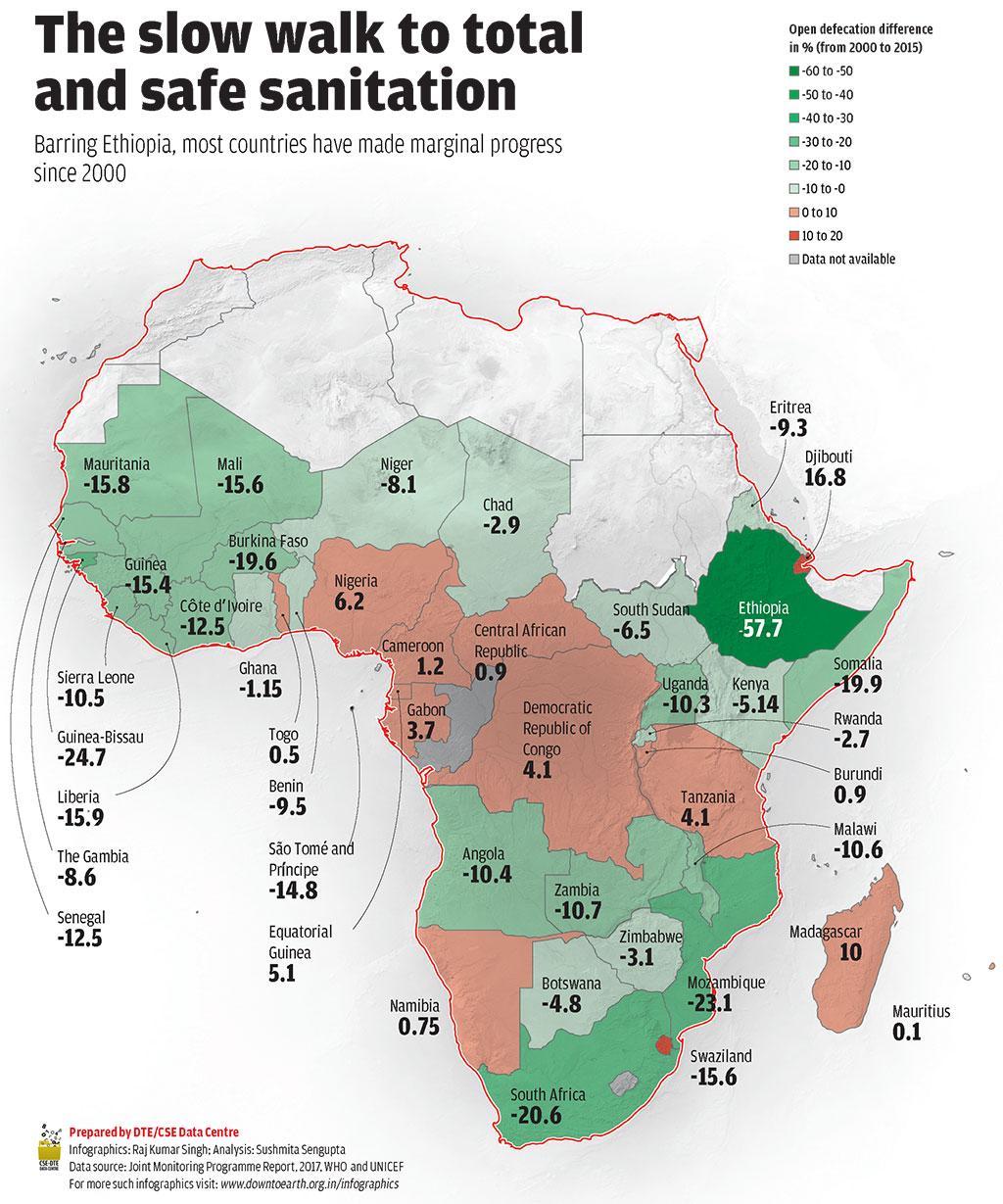 In December last year, international non-profit WaterAid released a report “Out of Order—the state of world’s toilets” that says the 10 worst countries in terms of access to sanitation are all situated in Sub-Saharan Africa.

The region had in fact showed a sluggish progress towards meeting the UN’s Millennium Development Goals (MDG), under which countries had to halve the proportion of people without basic sanitation by 2015. According to the World Health Organization (WHO), less than 17 per cent people in Sub-Saharan Africa gained access to sanitation during the MDG period as compared to 50 per cent in Western Asia and 41 per cent in Northern Africa. What’s worse, the state of sanitation has deteriorated to worrying levels in countries like Djibouti. The Joint Monitoring Programme (JMP) report, prepared in 2017 by WHO and UNICEF, notes that due to a combination of population growth and slow progress, the number of people practising open defecation has actually increased in sub-Saharan Africa, and the region now accounts for a greater share of the global total as compared to 1990. The progress of sanitation and hygiene coverage in rural areas is worse than in urban areas. At current rates of reduction, open defecation will not be eliminated among the poorest in rural areas by 2030, the report warns.

What’s bizarre is most countries that have witnessed improvement in reducing open defecation have done so by providing unimproved means of sanitation. JMP data shows that at the beginning of the MDG period, some 32 per cent people in Sub-Saharan Africa defecated in the open. The figure fell by 9 per cent by 2015. During these 15 years, the figure for those practising unimproved sanitation increased from 29 to 31 per cent. Going by WHO, unimproved sanitation facilities do not help hygienically—as excreta from is not separated from human contact—and, hence, pose health risks. In Sub-Saharan Africa, most people depend on unimproved facilities that belong to the apartheid era—uncovered pit latrines, buckets and even plastic bags.

On July 4, while visiting his aunt’s house in South Africa’s Limpopo province, three-year-old Omari Monono went to relieve himself in the pit toilet built metres away from the house. Instead, he slipped and drowned in the faeces-filled pit and died. A few months ago in March, five-year-old Lumka Mkhethwa died after falling into a pit toilet at the Luna Primary School in South Africa’s Eastern Cape province. The pit latrine has since been closed. A similar incident occurred in Limpopo in 2014, resulting in the death of Michael Komape, also aged five.

Pit toilet is the simplest form of dry toilet in which faeces are collected in a hole made on a concrete floor. The toilet seat is installed just above the hole, which remains covered with a lid when the toilet is not in use to prevent stench and contamination. Most designs do not require the use of water and are hence considered suitable for water-scarce regions, like those in Sub-Saharan Africa. But most pit toilets in the region are nothing more than just pits on the ground. The ones that have seats are made from cheap metals, they are shoddily built and remain uncovered. 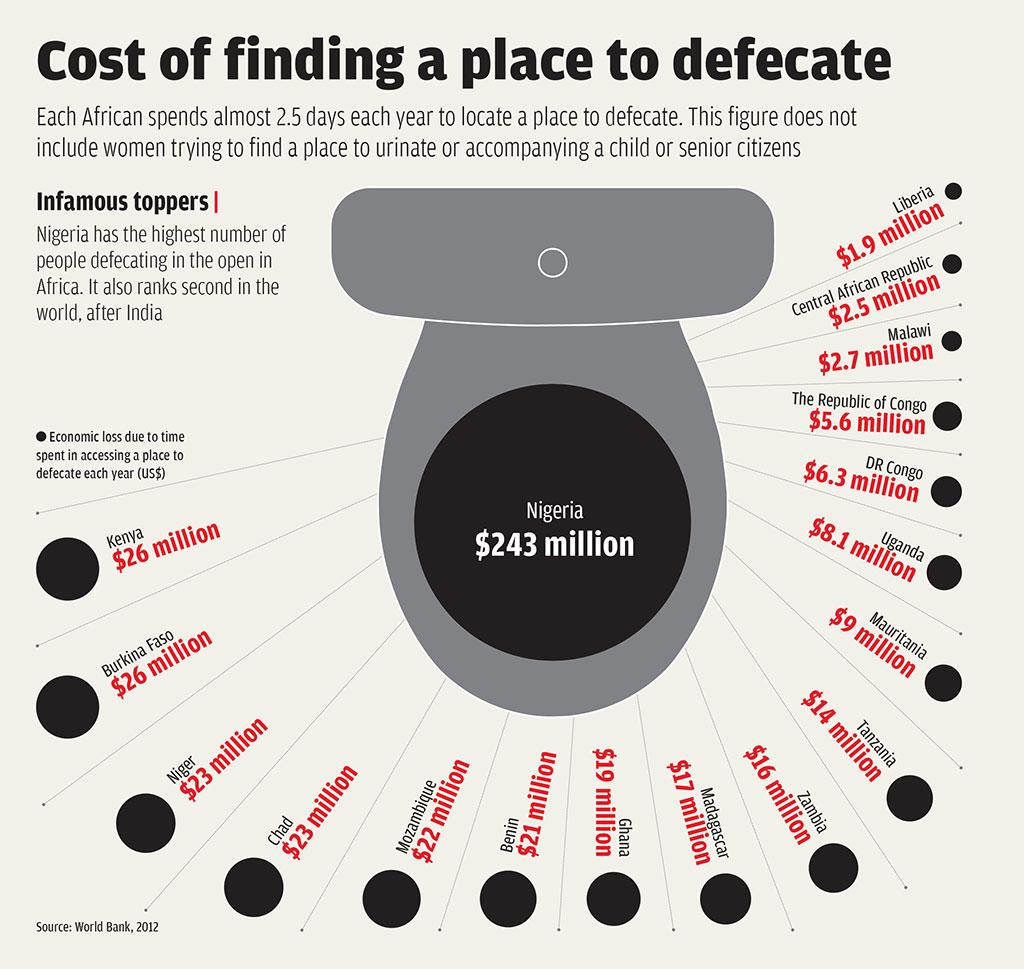 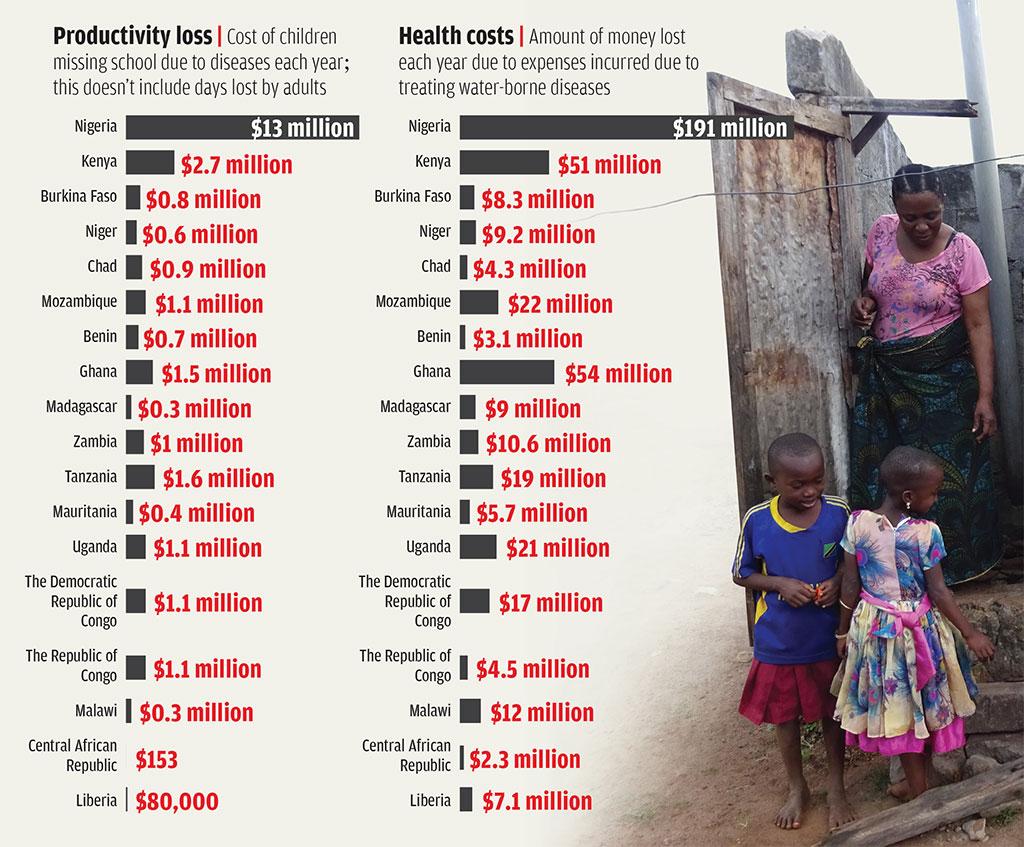 The pit toilet that Michael went to at the Mahlodumela Primary School had an iron sheet that served as the seat and a white plastic lid. But the seat was so corroded that it collapsed when Michael sat on it. He fell in along with the plastic lid. His parents are now fighting a lawsuit against the education department demanding justice. All this is when access to proper sanitation is a basic human right enshrined in South Africa's constitution and the country has reduced the prevalence of open defecation by 20.6 per cent during the MDG period.

In Ethiopia, seven in every 10 people use toilets. But the country has made the progress largely by investing in shared toilets. So has been the strategy of Tanzania, where more and more people are defecating in the open—the country's open defecation rate increased from 11.6 per cent to 15.7 per cent between 2000 and 2015. Experts believe the increase is due to the failure of poor toilet infrastructure like, the pit hole. Hadija Menato, a 45-year-old fruit vendor from Kizeitoheonywan village in Dar es Salaam shares the toilet with two households in her locality. The toilet is nothing but an open-pit latrine without a roof and door. While the toilet usually remains soiled and clogged, the condition worsens during rainy season. The rainwater mixed with sewage floods the entire village. "We not only suffer from intestinal diseases but fungus attacks on legs as we have to wade through faecal-laced water every day. In dry months, clean water supply becomes scarce and most of us suffer from diseases like jaundice and diarrhoea," says Menato.

Another apartheid-era sanitation facility that remains a challenge for the region is bucket and hanging toilets. And it is particularly so for Namibia, where the prevalence of open defecation continues to hover above 75 per cent. On several occasions, President Hage Geingob has admitted that eliminating the "demeaning" system remains a challenge for the government. As the name suggests, bucket toilet is a basic form of dry toilet where a bucket is used to collect faeces and urine. While it serves the purpose in emergency situations like earthquakes, it is a common mode of sanitation for several households in urban and peri-urban areas of Sub-Saharan Africa. In Namibia’s Karas Region, the bucket system is synonymous with many villages and settlements. The toilets usually overflow and give off a foul smell if they are not collected in time, and most empty the bucket somewhere nearby the settlement when it is full of human faeces and wash the bucket to use it again.

Eliminating the “inhumane and unhygienic” system is part of Geingob’s Harambee Prosperity Plan that aims to provide 50,000 rural toilets by 2019. However, due to budgetary constraints, the government has so far identified only 780 households in the Hardap and Karas regions to eliminate bucket toilets, and construct sewer-connected flush toilets. Hanging toilets have buckets or any other container and are mostly portable.

Understandably, basic sanitation services like sewage network and sewage treatment plants are a rarity in Sub-Saharan Africa. This adds to the burden of diseases in the region. In 2017, WHO prepared a factsheet on the health of children, which shows that Sub-Saharan Africa has the highest under-five mortality rate in the world, with one in 13 children dying before their fifth birthday. In Tanzania, where the prevalence of open defecation has increased over the past 15 years and only 17.2 per cent people in rural areas have access to any decent toilet, nine children die every day due to diarrhoea; one in three shows signs of stunted growth. The Water Aid report says one in every 10 girls misses school during menstruation in Sub-Saharan Africa.

An article on the health effects of water and sanitation in 10 laggard West African countries, published in international journal Public Health in 2016, shows that the risk of water and sanitation-related diseases is very high. The authors suggest that there is a need for a strong intervention by the public and private sectors in these countries, because improvement in sanitation and access to safe water will result in alleviation of poverty and prevent the re-emergence of neglected tropical diseases.

(This article was first published in the 16-31 August issue of Down To Earth under the headline ''Overwhelmed by despair').