The chase and the change: Let’s look back at 15 years of MGNREGA this World Water Day 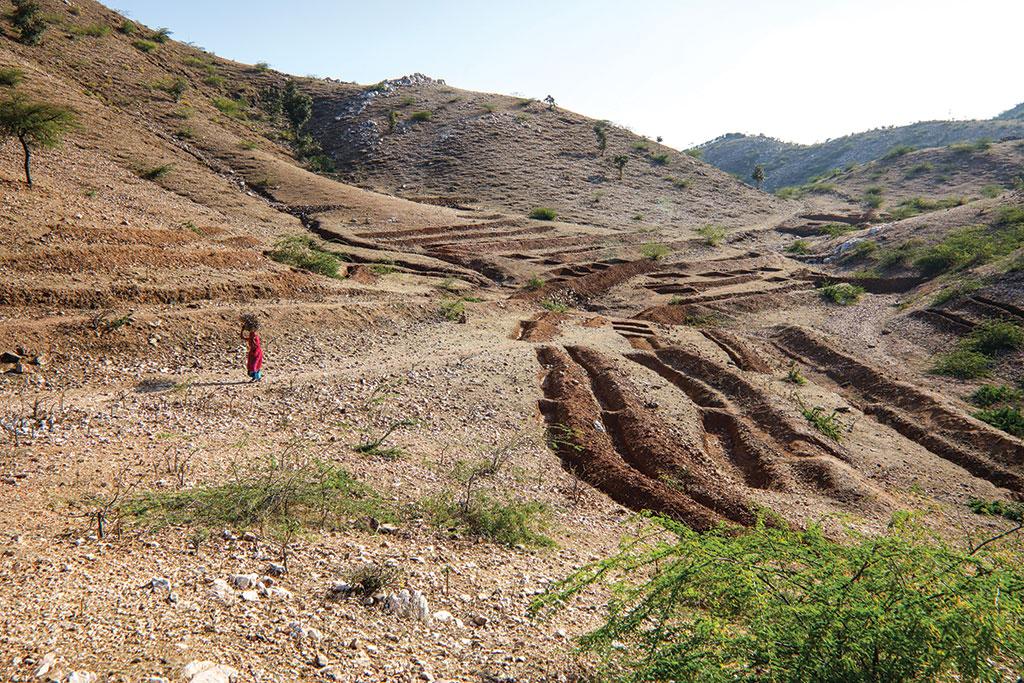 The idea was simple: To chronicle the change the Mahatma Gandhi National Rural Employment Guarantee Act (MGNREGA) has brought in the lives of people in rural India. It turned out to be a task easier said than done.

Fourteen reporters covered 16,000 kilometres in 15 states, hampered by restrictions posed by the novel coronavirus disease (COVID-19) pandemic, to gauge the impact of the world’s largest public wage programme in its 15th year of implementation.

A country where labour is the only resource for at least half the workforce, the programme guarantees, through a legal framework, at least 100 days of waged employment a year to households in rural India. This has made MGNREGA a much sought-after initiative for sustenance ever since it was implemented in 2006.

Data on the scheme’s website shows that on any given day some 15 million people work under the programme at 1.4 million sites. In the 15 years of its implementation, the Act has generated more than 31 billion person days of employment and the government has spent over Rs 6.4 lakh crore on this demand-driven programme.

But MGNREGA is more than just a generator of employment opportunities. It also legally ties labour deployment with creation of productive assets — such as structures to harvest or conserve water, farm ponds and irrigation channels — to contribute to the overall development of the village.

The programme mandates that at least 60 per cent of the works undertaken must be related to land and water conservation. After all, in villages that are primarily agrarian and predominantly rainfed, water availability determines destiny. This legal requirement makes MGNREGA stand out from other welfare and poverty alleviation programmes.

In a way, the programme has a built-in expiry date: The productive assets constructed would create so many economic opportunities in the villages that people would stop demanding work. MGNREGA’s redundancy should be its ultimate barometer of success. How does MGNREGA fare on this count?

The government does track the number of people employed and the kinds of works undertaken. Down To Earth (DTE) scoped 15 years of official data to estimate the numbers. They are huge.

Since 2006, more than 30 million water conservation-related assets have been created in the country’s rural areas. This comes to at least 50 water-related structures per village, with the total number of villages in India being 0.6 million, according to Census 2011. For comparison, India has 3.1 million elected Panchayat representatives under what is known as the world’s largest experiment in local democracy. This means, on an average, a village in India has more water-harvesting structures than elected representatives.

Calculations by DTE also show that these structures have potentially conserved at least 28,741 million cubic metres of water in the past 15 years. Given the number of water structures and making some assumptions, at least 18.9 million hectares (ha) are being irrigated. This is beyond the 64.7 million ha farmlands that are in the command area of dams and receive water from reservoir-based irrigation systems.

This potential of water structures under MGNREGA offers hope at a time when India stares at severe water scarcity. The 2018 Composite Water Management Index, developed by the government think-tank NITI Aayog, notes that water demand in the country will exceed supply by 2030.

The Fifth Minor Irrigation Census (the latest one, referring to the year 2013-14) says there were only 21.7 million minor irrigation structures in the country. Almost 95 per cent of these use groundwater. But 60 per cent of them are in disuse due to lack of water availability, indicating fast depletion of groundwater, the census found. The structures under MGNREGA aim to fix this decline by creating potential for water conservation and recharge of the aquifers.

So, have these water conservation structures under MGNREGA benefitted the villages? Fifteen years is a long time for any scheme to show its development potential in real terms. We began our 15-state excursion seeking an answer to this question. 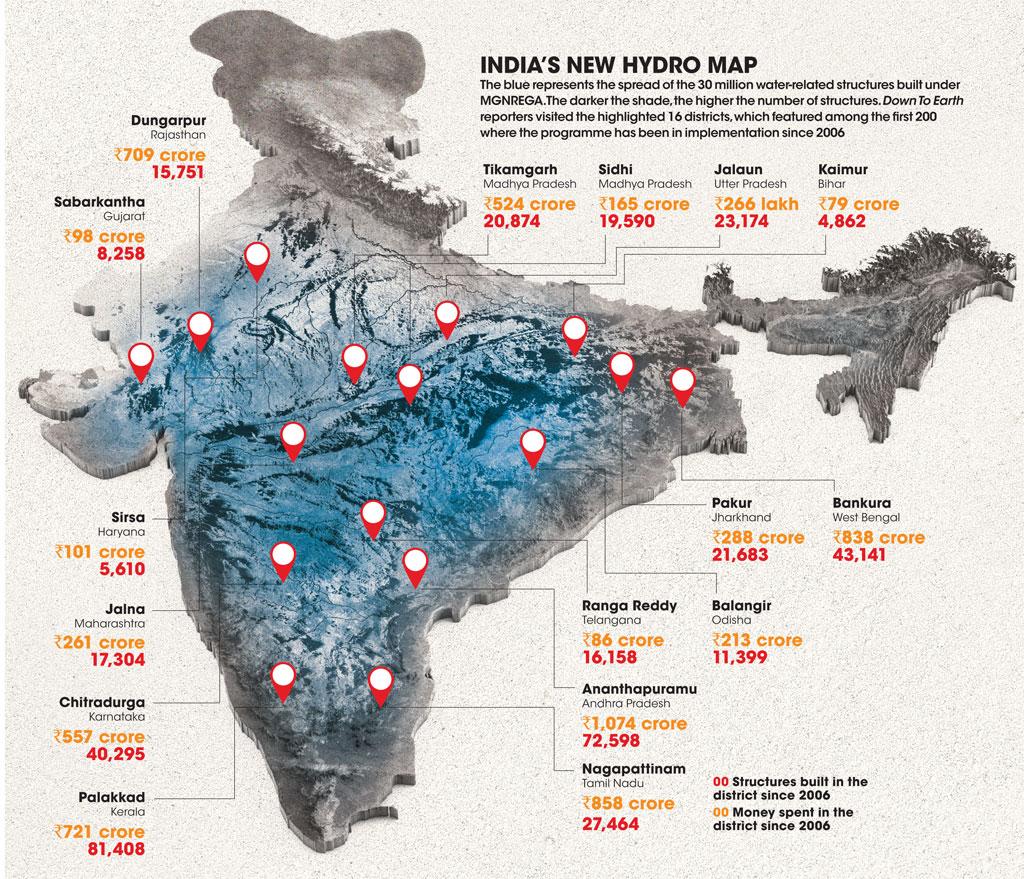 There are more than 600 districts in the country and MGNREGA is being implemented in over half a million villages. So, how does one find what has changed and where? Is there a way to make a selection from the 30 million water-related structures to report on? How can one measure their impacts in term of income rise and revival of agriculture?

The government does not monitor whether a structure has actually helped water conservation. Neither is there any data on the impact on groundwater levels, or on improvements in land productivity and livelihoods.

We came up with the idea of going to 16 of the 200 districts where MGNREGA was implemented in its first phase in 2006. In 2008, Delhi-based research think-tank Centre for Science and Environment (CSE) had released an assessment of MGNREGA that involved detailed analysis of many of these 16 districts. DTE had also reported widely on MGNREGA’s progress on productive assets creation in 2007, which also included reportage from a few of these districts.

Spread over various agro-ecological zones of the country, the government has listed these districts as the country’s poorest since 1952. They still lag on several development indicators. Official data also showed that the states in which these districts are located have reported significant works under the water conservation category. These districts, too, have constructed water-related structures by the thousands.

Selecting a village in each of these districts to report the “change” was an expansive exercise. In most states, district officials could not list one successful village; nor did they have list of villages with the “highest number of water works under MGNREGA”. Many regional non-profits helped in locating villages with remarkable works, while the 2008 CSE assessment guided us to villages to re-assess MGNREGA’s developmental impact after 15 years.

And did we witness change? We certainly witnessed the centrality of water conservation to overall village development. We visited Bandlapalli in Andhra Pradesh’s Ananthapuramu district — the first village from where MGNREGA was launched in February 2006 by former prime minister Manmohan Singh — to find that distress migration has stopped and the village is drought-proof.

In Barmani village of Madhya Pradesh’s Sidhi district — which DTE had visited when MGNREGA was launched — we found that migrant labourers have returned to resume farming after the implementation of massive water conservation programmes.

In Pookkottukavu village of Kerala’s Palakkad district, MGNREGA has lead to the formation of the country’s largest group of trained women well-diggers. In Pallassana village of the same district, such is the obsession with water conservation that the people have managed to revive a river. With water available, villages have increased agricultural productivity and made financial gains.

In the perennially drought stricken Bundelkhand region of Uttar Pradesh and Madhya Pradesh, there are many villages that have used the programme to become water-surplus.

These villages have reaped enormous economic benefits defying all odds, notwithstanding the many lacunae of MGNREGA. How did they do it?

Trails of these remarkable turnarounds invariably lead to local communities focused on water conservation and their persistence to stick to this pathway to prosperity. At the core of this is the five-year plan every panchayat is mandated to make to implement MGNREGA. In all these villages, this plan has been zealously pursued.

All these structures have been planned and executed under the supervision of gram sabhas or village councils, which consist of all residents of the village registered in the electoral rolls. The structures, thus, reflect local needs.

This is a story of millions of opportunities. As our reports show, every pond and tank is a development instrument and MGNREGA has created millions of them. Thus, by any parameter, MGNREGA is also the country’s largest water-conservation exercise.

However, it is time we stopped counting the number of works. The government must now measure the potential harvested from these instruments. For this, it must track impacts of water harvesting structures in terms of local land and water resources.

Our stories point to the constant monitoring and maintenance of water works by communities to keep them working. As government data shows, half of the water structures are either left unfinished or have turned defunct after a few years due to the lack of maintenance. This is wasted opportunity.

But for the moment, let us celebrate the good news. The villages that began their development journey over a decade ago have shown the potential of using water as an agent of change. They should become the lighthouse for others. Many others.