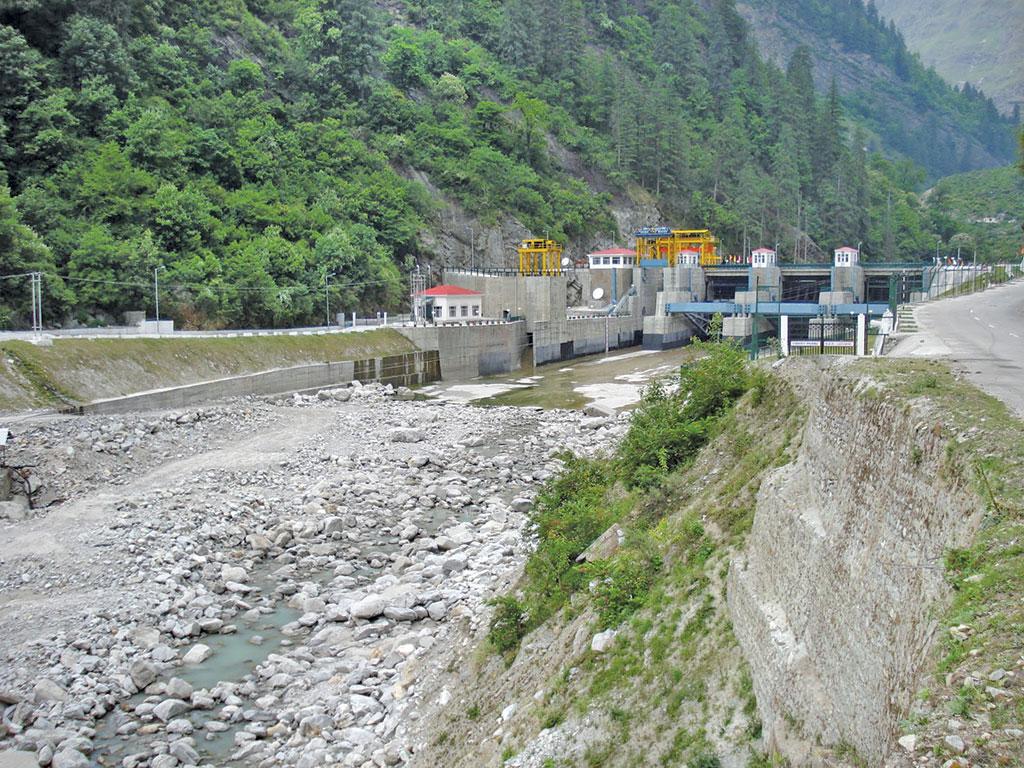 The future of government-prescribed minimum water discharge guidelines for the Ganga appears to be in jeopardy.

These environmental flow (e-flow) norms stipulate the volume of water that dams and barrages must release to allow the river to naturally clean itself and protect its aquatic biodiversity. The e-flow norms were notified in September 2018 by the National Mission for Clean Ganga (NMCG), the apex body responsible for the cleaning and rejuvenation of the river, and are to be enforced from December 15, 2019.

While all the barrages have started following them, owners of three dams have said they cannot increase the flow from their reservoirs, as required by the notification, because it would reduce their power generation capacity and lead to huge financial losses. Two of the dams are owned by private companies while one is under the Uttarakhand government.

The Ganga has six dams and four barrages along its run in the country. In the upper Ganga basin (Tehri Garhwal to Haridwar in Uttarakhand), where all the dams are located, the notification prescribes three norms: The outflow should be 30 per cent of the monthly average inflow from June to September, which is the high flow season; 25 per cent in October, April and May; and 20 per cent from November to March, which is the lean period.

For the middle Ganga basin (Haridwar to Kanpur in Uttar Pradesh), where all the barrages are located, the e-flow is different for each project.

Leading the rebellion is Alaknanda Hydro Power Company Ltd (AHPCL), which operates the Srinagar dam in Pauri Garhwal, and produces 330 megawatt of electricity that it supplies to Uttar Pradesh (88 per cent) and Uttarakhand (12 per cent, free of cost as a royalty for being located in the state).

The Vishnuprayag dam in Chamoli district, owned and operated by Jaiprakash Power Ventures Ltd, is the other private dam that has conveyed its unwillingness to follow the notification to the Central Water Commission (CWC).

The Uttarakhand Jal Vidyut Nigam’s Maneri Bhali Phase-2 dam in Uttarkashi district is the third dam whose officials have expressed reservations about the notification in departmental meetings, an NMCG official told Down To Earth (DTE), requesting anonymity.

However, CWC, which has been collecting daily discharge data from all the dams and barrages since January and has released three quarterly reports on the data, says that AHPCL’s claim is false.

As per its report for the second quarter (April to June), the daily outflow from the dam rarely touched 5 per cent between May 15 and May 21. This is mentioned in the counter affidavit filed by NMCG in the court. The data also shows that Tehri dam is the only one that has complied with the notification. Emails by Down To Earth to the dam authorities went unanswered. 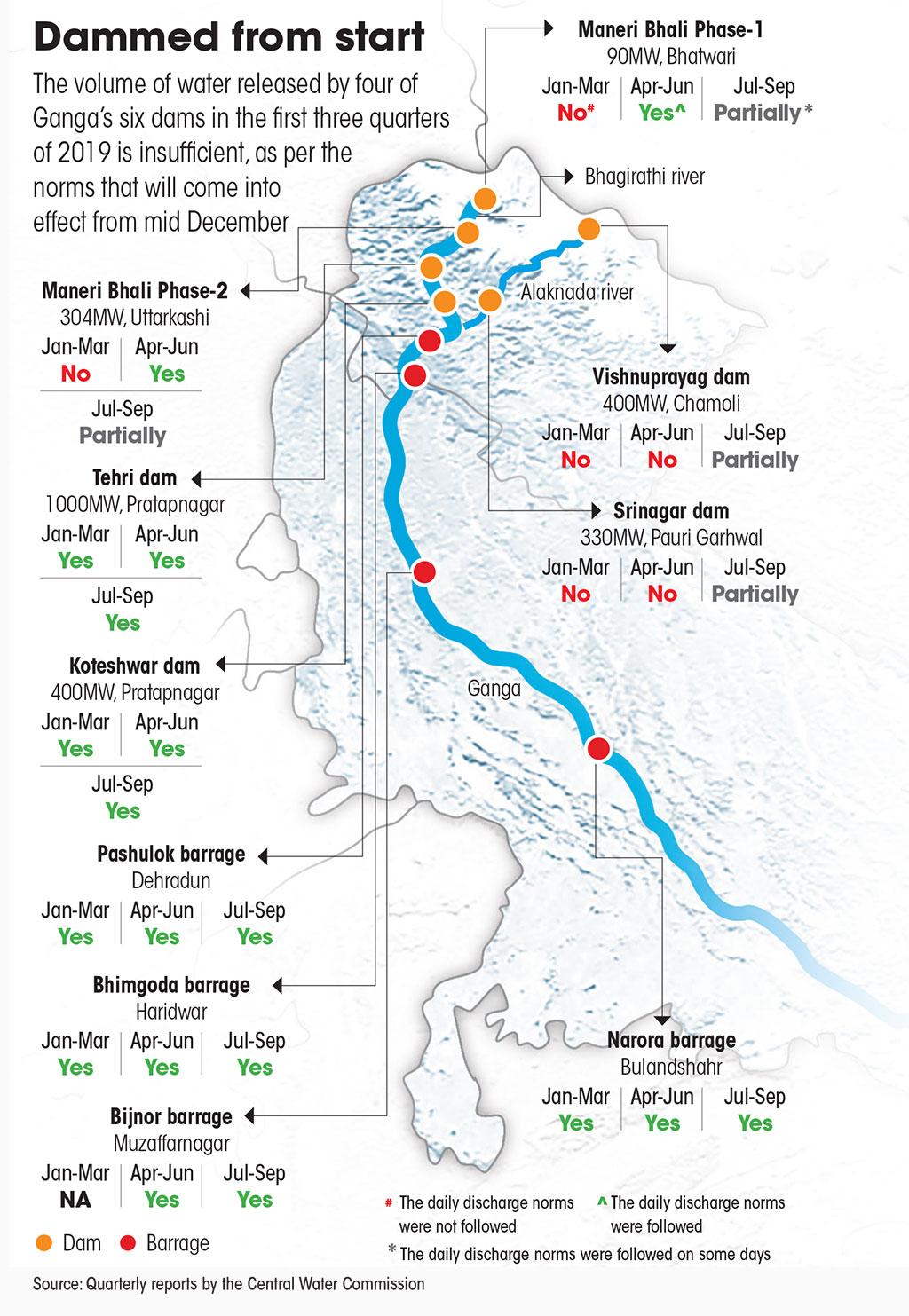 The NMCG affidavit also said AHPCL’s claim of financial loss cannot be an excuse for not allowing the Ganga to flow freely. “It is crucial to point out that the notification does not restrain operations of any industry but curtails over-exploitation of natural resources which would not be sustainable in long run,” it states.

The dams are free to approach the appropriate forum — central or state government — to demand compensation for the revenue loss, told Rajiv Ranjan Mishra, director general, NMCG, to DTE.

AHPCL is bound by its agreement with the Uttarakhand government, which states that the company will follow all statutory provisions related to the project and the new notification is one such provision, said a senior NCMG official, requesting anonymity. The indifference of the dam authorities is particularly concerning because the dams do not require any investment or change in technology to increase the flow in pursuance of the notification, the official added.

“This was the most practical way to begin with. In time, we will review the impact of the notification and might enhance the upper limit of outflows too,” Mathuria said. “The notification for the Ganga should pave way for e-flows notification of the Yamuna and other rivers. There is no way the government can go back,” said Manoj Mishra of Yamuna Jiye Abhiyan, a consortium of non-profits and individuals working to clean the Yamuna.

Maintaining e-flow is key to curbing pollution in the Ganga if India is to meet its deadline of cleaning the river by 2020.

“Water is allocated to hydropower to achieve objectives of energy generation, and water is allocated to e-flows to achieve environmental and ecological objectives. Both have merit and both are goals within integrated water resource management. It is vital for the government to show that societal benefits are gained from the allocation of water to the environment,” said Michael McClain, an expert on e-flow and chair professor of ecohydrology at IHE Delft Institute for Water Education in the Netherlands.

The hearing of the AHPCL’s case has not started and could happen in November. With activists and researchers having already said that the e-flow prescribed by the government is not sufficient, the case becomes all the more critical to the river’s health.