Rainfall deficit can be a challenge as well as an opportunity. By constructing rainwater harvesting structures, Uttarayan not only showed the way to address urban water scarcity, it also helped recharge groundwater with 1.06 million litres of rainwater

When I was a child, the dug well in my home, Uttarayan, in Dhanbad, Jharkhand, was the most captivating landscape, especially during the monsoon. During this period, the dug well would be brimming with water. It used to be a mesmerising sight when the dug well would overflow. But for the past two decades, this phenomenon has ceased, and so has the incessant charm of the dug well. While researching, I found that this was not just my home’s story; it was the recurring narrative for the entire Dhanbad city. I also found that the reason for the decline in dug wells as well as groundwater was the domination of tube wells over traditional sources of water. For uninterrupted water supply, residents were extracting groundwater from greater depths.

An interesting development took place in May 2017. The Gang of 20—Future Water Leaders from Carmel School, Dhanbad, under the Participatory Action Research on Urban Groundwater—in collaboration with Megh Pyne Abhiyan, a Delhi-based non-profit working in Bihar and Jharkhand, conducted a survey of 734 households. The survey found that a majority (about 65 per cent) of residents were dependent on groundwater, followed by surface water (31 per cent). The dependence on both sources was 4 per cent.

From June 3 to October 12, 2018, Uttarayan received 49 days of rainfall (528 mm), of which 1.06 million litres of rainwater was harvested, and all of it was utilised to recharge groundwater. Even with a 60 per cent rainfall deficit, Uttarayan re-charged the groundwater with 1.06 million litres of rainwater, and if the harvested rainwater was stored then it could ensure availability of 2,922 litres of water per day for the entire year—all from 2,249 sq m of rooftops.

According to the Central Public Health & Environmental Engineering Organization, urban residents consume 70 litres per capita per day (lpcd), without the sewage system. With the prescribed water supply criteria, the rainwater harvested by Uttarayan has the capacity to provide water to 42 households throughout the year. But if Uttarayan could harvest rainwater according to its capacity, it can provide water to about 130 households annually. This is the potential of rainwater harvesting.

In 2018, Dhanbad was hit by acute water crisis. The problem lasted from late April to the end of June. The reason for this shortage was erratic surface water supply as well as depleting groundwater levels. And herein lies a paradox. Let’s understand this so-called “water shortage”. Of the 220,783 households residing in Dhanbad Municipal Corporation (DMC) area, only 47,641 households (about 21.57 per cent) have access to piped water. According to the Service Level Improvement Plans and State Annual Action Plan, the water supplied to DMC is 98 lpcd at present, which is about 24.2 million litres per day (MLD) for an estimated population of 247,733 persons (average house-hold size of 5.2 persons). 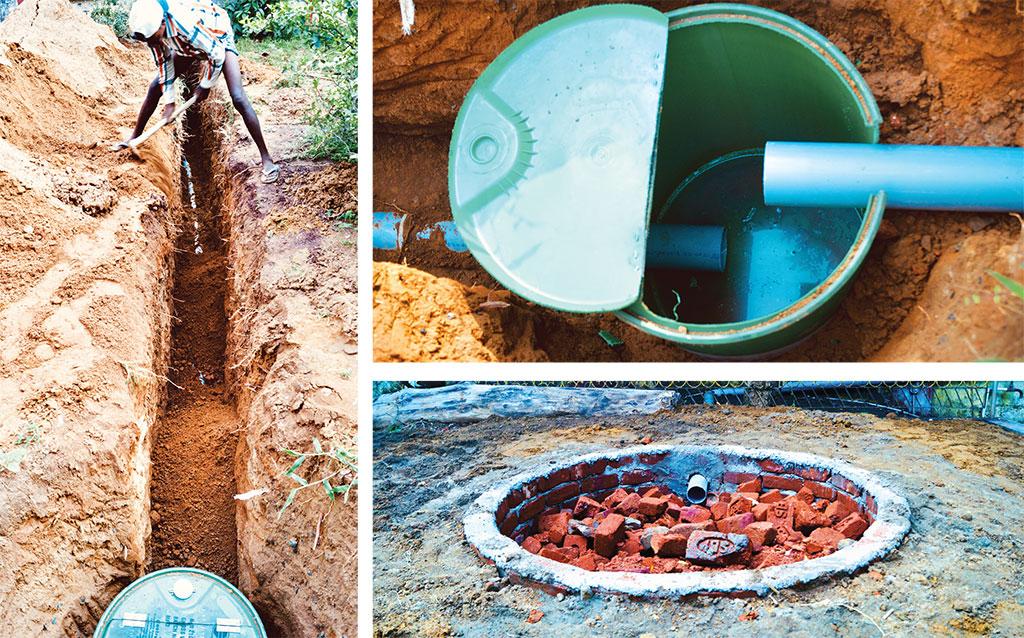 But on paper, DMC has more than enough capacity to meet the demand. The installed capacity of the six water treatment plants (WTPs) in DMC is 356.60 MLD and the utilised capacity is 110.50 MLD. What’s ironic is that the total water supply is a measly 24.2 MLD! The water shortage was so severe that there were demonstrations held across the city. How can there be scarcity despite the available resources?

According to the Master Plan 2041 of Dhanbad, the estimated population in 2041 will be about 1.4 million and the requirement of water for domestic and non-domestic use would be 226.80 MLD at 155 lpcd as per the norms of the Ministry of Housing and Urban Development. The present installed capacity of WTPs, which is 356.60 MLD will remain appropriate in 2041 and beyond, keeping in view the total domestic and non-domestic use.

If that is the case then why is an additional 143 MLD capacity being created under the Jawaharlal Nehru National Urban Renewal Mission and the Department of Drinking Water and Sanitation?

On the other hand, according to the 2017 document of the Urban Development & Housing Department, Government of Jharkhand, DMC is spread across an area of 275 sq km. Even if we consider that half of this area is appropriate for harvesting rainwater, with approximately 60 per cent of runoff, the total capacity of rainwater that can be harvested in the DMC area annually is about 293.8 MLD. Whereas, according to the Master Plan 2041, the estimated requirement of water for domestic and non-domestic use would be 226.8 MLD.

If rainwater harvesting alone has the capacity to address the water requirements of Dhanbad, then why is it being ignored?