Water-stressed in India: Bagalkot not doing enough to conserve water 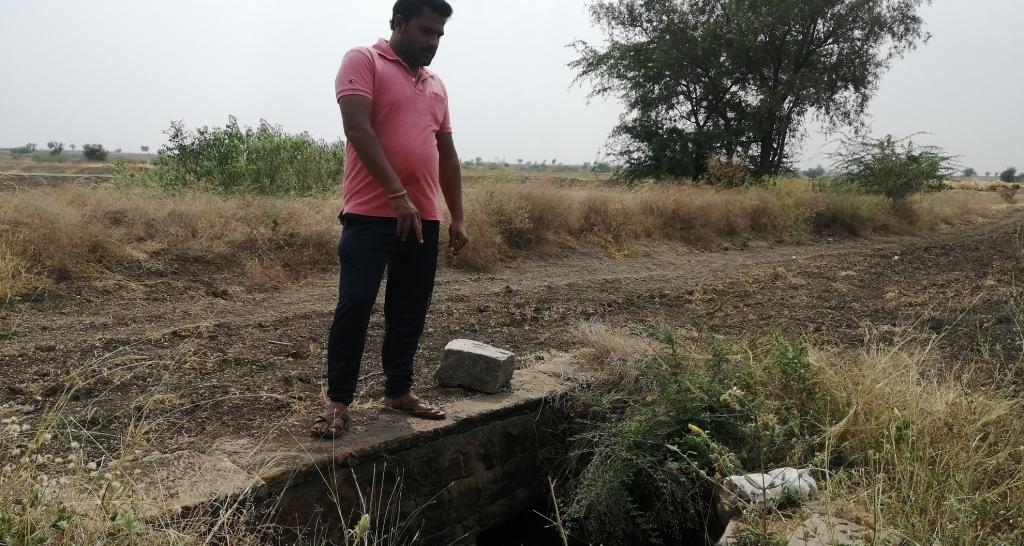 Engineer-turned- farmer Mahantesh Nagaral showing the small well through which water flows into the adjoining field after the soil has soaked up enough moisture. Photo: Akshit Sangomla

The administration in north Karnataka’s Bagalkot district has done woefully little to conserve water under the Jal Shakti Abhiyan (JSA) by the Union government between July and September 2019, a Down To Earth (DTE) investigation has found.

Despite a 25 per cent excess rainfall in the 2019 monsoon season, Bagalkot is drought-prone, with 65 per cent of its population employed in agriculture. Within Bagalkot, the Hungund taluka is even more water-stressed, with a meagre rainfall throughout the year and next to no ground water or bore wells.

That should have meant active engagement from the district administration under the JSA, meant for ensuring water security to the people in the country, especially farmers. But this has not happened.

“Except for the building of some field bunds in some areas, not much has happened under the Jal Shakti Abhiyan or Mahatma Gandhi National Rural Employment Guarantee Scheme in the region,” Mahantesh M Nagaral, an engineer-turned-farmer in Hungund town, told DTE. This has, in fact, led to Bagalkot being ranked 202 in the JSA rankings, one of the lowest.

Nagaral comes from an illustrious family of farmers famous for using drought proofing techniques in their agricultural fields for the past 107 years. He himself has been involved in agriculture for the last 25 years.

His forefathers had established a drought proofing technique in 1913 by levelling and reorganising the land in such a way that when it rains, water from 80 hectares of the surrounding farms flows into their seven-hectare field through stone culverts, also known as Vadagatthi in Kannada. They allow the water to stagnate on this land for 10-12 hours by plugging the culverts and wells on the land.

The water seeps into the land and increases soil moisture required for growing crops. Then, the stone culverts on the other side are opened and the water is let out onto the second six-hectare field owned by the family. The process of stagnation is repeated here again. Excess water can also be drained with the help of small wells also known as Gundavarthi in Kannada, apart from the culverts.

After the second field is drought proofed, the left-over water is let out into the surrounding field. “This technique of drought proofing by enhancing soil moisture has worked for us for all these years even when the rest of the district has been under severe drought as happened in 2003,” Nagaral said.

This year, his family cultivated Bengal gram in both their fields and reaped significant profits because of a decent minimum support price of Rs 5,800 per quintal given by the government. Bengal gram and red gram are grown extensively in the region as they require less water, grow well in the black soils and fetch decent returns.

“Around 240 hectares of land in our area is similarly drought proofed now but there are many who have not picked up the technique as yet. One of these is our immediate neighbours,” he added. Nagaral is not sure about the reasons to explain the reluctance of other farmers in the area to take up the drought proofing technique.

“Simple ego is sometimes the reason,” Nagaral said. “Such steps are a necessity in our area as there is very less rainfall and absolutely no ground water. Some farmers in our area have dug up bore wells as deep as 2,000 feet but found no water,” Nagaral noted. His father, Mallanna S Nagaral, now travels to other districts of Karnataka and even other states, advising farmers on how to drought proof their farms.

And it is not that the government has not acted to resolve the water crisis in Bagalkot. Back in 2016, the state government launched the world’s largest community drip irrigation system, specifically targeted at the farmers in Hungund taluka.

Built at a cost of Rs 786 crore, the project was supposed to bring water from the Ghataprabha and Mallaprabha rivers nearby to irrigate 24,300 hectares of fields in Hungund. Nagaral’s fields were also fitted with drip irrigation pipes and water flow controlling apparatus two years ago.

For Nagaraj though, these are as good as useless as the water is never released on time. “There is a big gap between when we need water for our crops and when it is supplied through the drip system. We often get calls for release of water after we are done with the cropping season,” Nagaral said.

“A simple administrative correction in this regard from the taluka authorities would go a long way in supplying water when we need it,” he said.