Water-stressed regions in India could learn a lesson or two from Telangana’s Sangareddy district. Since 2016, several Centre and state government interventions, coupled with community efforts, have revived groundwater levels there. De-silting of Pedda Cheruvu tank had been a crucial initiative.

“Water pressure from the village borewells has gone up after Pedda Cheruvu tank was de-silted,” said Anil Kumar, a buffalo herder from district's Lakdaram village.

During the first phase of the Union government’s Jal Shakti Abhiyan (JSA), ground water level rose to 17.53 metres in September 2019 from 19.4 metres in July 2019 in the village, according to state groundwater department data.

The Pedda Cheruvu tank — around 70 years old — was recently de-silted under the state’s Mission Kakatiya in 2016. The activity was included under JSA, launched by the Union Jal Shakti ministry in 2019.

To de-silt a tank, an agricultural official assesses the quality of the silt. If it is deemed to be of high quality and useful for farmers, the official certifies the silt fit for farm use. The information is then passed on to nearby villages through gram panchayats.

Farmers are then facilitated to employ earth-movers to dig up the tank bed and haul the silt to their agricultural fields. The process is usually carried out in the dry season.

“If the silt is deemed unfit for agricultural purposes, it is supplied for other government projects,” said VM Chakravarthy, assistant executive engineer, Telangana’s irrigation department.

“About 40 per cent of the Pedda Cheruvu tank had been de-silted by the time we began our restoration work under JSA,” said G Udhay Bhaskar Rao, deputy executive engineer, irrigation department.

The tank was restored to its full capacity of 63,000 cubic metres in 2016 during the Kakatiya mission — despite a dip in water levels over the years due to scant rains. As of 2019, the capacity was at 50,000 cubic metres.

Kumar pointed out that villagers also started cultivating fish in the tank, giving livelihood opportunities a push. Fourteen such tanks were revived under Mission Kakatiya in the region.

According to Rao, lake protection committees were formed all over the district to prevent pollution in tanks and construction near its banks.

But de-silting under Mission Kakatiya remained under the scanner of water experts and was criticised for being ‘unscientific’.

"Mere de-silting and bund strengthening is not enough. It is being done haphazardly by using a JCB (earth-moving machine), without maintaining the ‘saucer’ shape of the tank waterholding area," said Narasimha Reddy Donthi, a water expert in Hyderabad.

This, Donthi said, often leads to leakages and seepage of water beyond the bund. Tank bed becomes undulating with deep pits within, thereby endangering bund strength as well as animals swimming in the tank.

Lack of proper catchment area treatment and command area management is also a problem. “Many tank bunds were breached in the aftermath of Mission Kakatiya. Precious water was lost and potential source of groundwater curtailed,” added Donthi.

In several cases, farmers demanding silt for their farms were shunned. The silt was, instead, supplied to brick-making industries, claimed Donthi. He added that an independent and scientific assessment of all de-siltation works should be carried out.

Sangareddy was ranked second best among the 255 most water-stressed districts in the country in terms success of water conservation interventions under JSA. 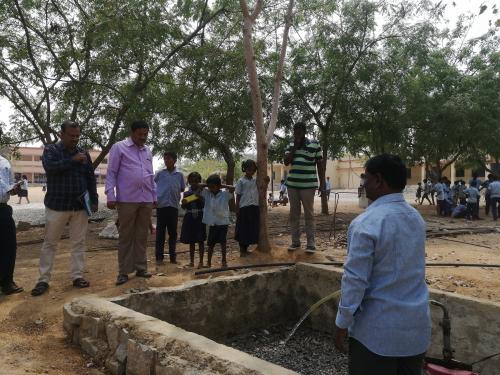 A community soak pit in the Zila Parishad High School has been able to revive a nearby borewell. Photo: Akshit Sangomla

Farmers now cultivate rice on a 13-acre area in the village — earlier not under cultivation due to lack of water. “This is because of the check dams. Water is available from the beginning of the monsoon till end-February from one of these check dams,” said Thammannagiri Raju, assistant project director (capacity building), district rural development agency, Sangareddy.

Each of the 647 gram panchayats under the scheme would be given between 5,000 and 50,000 saplings to plant. To maintain local bio diversity, demands for the type of saplings comes from gram panchayats, which are catered to by the district administration. In some villages such as Muttangi where MGNREGA funds were not sufficient to make procurements, additional funds from corporate social responsibility were utilised.

While verifying the work done is difficult, officials assured that work has happened consistently in the entire district.

For example, the district has reported around 6.67 lakh water conservation and rain water harvesting activities, and over 59 crore afforestation activities. Even if a maximum of 50,000 saplings were planted in each of 647 gram panchayats, the number would come around to 3.23 crore activities.

A combination of central schemes such as MGNREGA and Pradhan Mantri Krishi Sinchai Yojana (PMKSY), and Telangana state schemes with a a pro-active district administration meant the district performed well.

Average ground water levels in all eight mandals of the district have improved between July and September 2019. How much of it can be owed to the works listed under the JSA is, however, difficult to tell — the period falls under the southwest monsoon season which accounts for most rainfall in the region.

Even though monsoon rainfall was deficient by 20 per cent, ground water levels increased during the season.

Kumar pointed that some funds should be allocated to encourage locals and officials to take up water conservation works. He added that MGNREGA funds had not been released in some cases. This, he said, needed to be done so that contractors could be financially secure.