Locals claim they have enough water; Down to Earth found farmers extracted millions of litres of ground water every day through illegal pumps

The block is located about 110 kilometres from Kolkata. While local residents maintained they had enough water, Down to Earth found millions of litres of ground water was pumped out illegally every day.

A 2011 state government notification allowed districts with ‘safe’ groundwater levels to use shallow pumps of five horse power (hp) without government permission. This permitted over-withdrawal of ground water, according to Chittaranjan Mallick, an activist.

Residents of Bengai village claimed farmers operated such pumps for nearly 20 hours a day during the boro (a crop season) paddy and potato cultivation season — barring evenings when the electricity rate was high.

According to a panchayat member Basab Chattaraj, the village had 80 such pumps.

“A five hp shallow pump extracted about 30,000 litres of ground water an hour, which was six lakh litres a day. Imagine the amount of ground water extracted in the non-monsoon season,” a district official said.

The block’s ground water table receded by 16.2 metres before monsoon in 2020. This improved by a metre later. 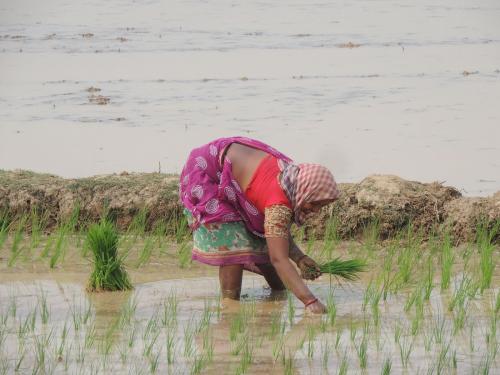 A local administrator claimed they were helpless as several farmers had “local panchayat and politicians’ support”.

“Moreover, farming is the major source of livelihood. Any initiative to cut down on the practice may lead to a major law-and-order problem,” he added.

Under Union government’s Jal Shakti Abhiyan (JSA), Hooghly ranked 203 among 255 districts, third-lowest in the country. Its score was 5.07 out of 60.

The district scored zero in critical parameters such as ‘water conservation and rain water harvesting’, ‘renovation of traditional and other water bodies/ tanks’, ‘reuse and recharge structures’ and ‘intensive afforestation’.

“The result was an eyeopener. It is strange why adequate ground water conservation programmes have not taken place in Goghat II. The block has been in a critical stage for long and Chief Minister Mamata Banerjee has been pushing for jal dhoro, jal bhoro (catch water and conserve water),” said a senior official of the state Water Investigation Department (SWID).

Of late, however, the administration office has swung into action.

“Much of the work has been completed. The rest would be done in the current financial year,” he added.

During its visit to Karnapur village, Down to Earth found that excavation and rejuvenation of moderate to large water bodies, mainly comprising community ponds, were either completed or in the process.

“They are used as fishery ponds. Their proper excavation would not only allow water retention during summer, but also help improve livelihood,” said Samit Pandit, a local fisherman.

However, Karnapur is more of an exception than rule in Goghat II —many have blamed faulty government policies for the situation. Bhabadighi village is sustained by a water body by the same name.

“But the railways are planning to build a line cutting through the water body. We went to the High Court to stall it. But the question remains — how can a government department plan a move like this in a water-stressed area?,” said Santanu Chakrabarty, a local in Bhabadighi.

Several experts believed it was wrong to label the entire district, which has 19 blocks, ‘water-stressed’.

“It is neither fair to term Hooghly district as water-stressed, nor score its ground water management system poorly based on the performance of one block. We have undertaken over 3,800 ground water conservation programmes in the entire district,” said a senior state government official.

Kalyan Rudra, state pollution control board chairman and water expert, said: “It’s unfair to term Hooghly as water-stressed district. I feel the hydro-geomorphology was not properly considered while selecting the district. Hooghly gets nearly 1,600 mm of rainfall. It has the Ganga and the Damodar flowing through it and significant penetration of water in underground aquifers”.