When water is no longer limitless

Day Zeroes are inevitable unless cities innovate, diversify supply sources and emphasise on the judicious use of water 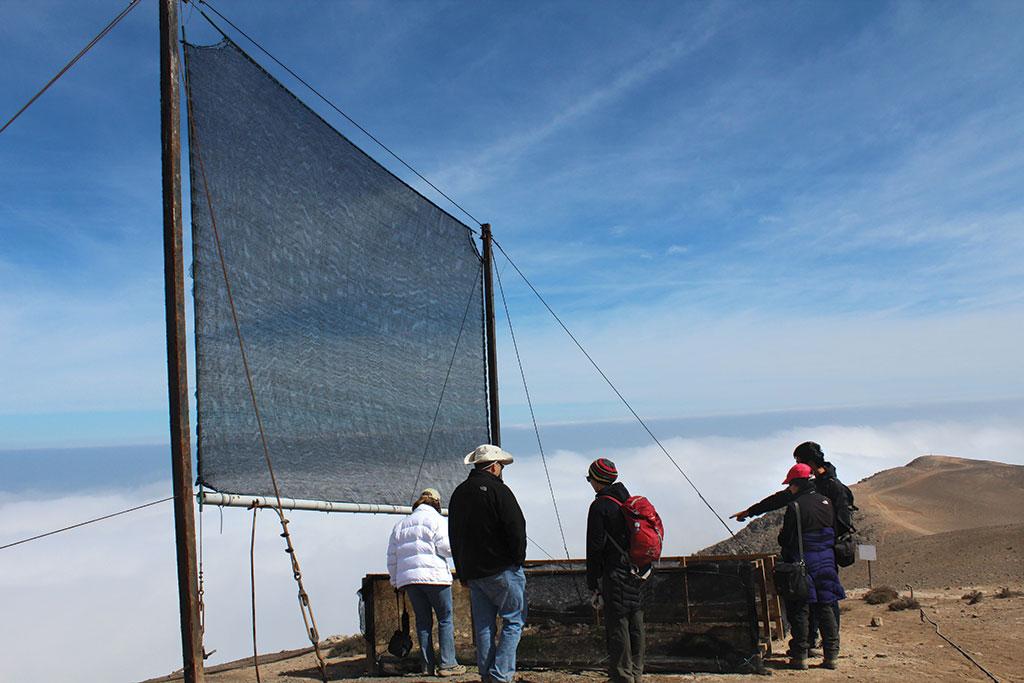 Water-scarce residents of Chile use fog net to capture humidity and turn it into potable water (Credit: Nicole Saffie)

We are living in what could be called the urban century,” says Robert Mc Donald, scientist at the US-based non-profit Nature Conservancy. Rightly so. More than 2 billion additional people, or one-quarter of the current global population, are expected to be in cities just three decades from now. They will all need water to drink, to bathe, to use the toilet, to wash their clothes and dishes, and for electricity, even as weather patterns become increasingly uncertain. Forecasts say urban water consumption might increase by 80 per cent by 2050. Growing abuse will further leave this seemingly infinite resource polluted and contaminated. As governments and water agencies scramble to avert their own Day Zero, they can turn to the ones who have quietly fought water stress through innovations and by integrating various urban water management strategies.

Just before the debilitating millennium drought (which lasted 14 years from 1997) gripped large parts of Australia, the island continent had introduced the Water Efficiency Labelling and Standards Act of 2005. The law changed the water standard for washing machines, toilets, cooling towers, shower heads, taps as well as for industrial processes so that they do more with less. These standards also formed the basis of water-efficiency star ratings, much like energy-efficiency labelling that allows consumers to make an informed choice about the product. Today, manufacturers in Australia cannot make, and retailers cannot sell, for instance, toilets that have a higher flow rate than 5.5 litres per flush.

These products helped many cities meet the water demand during the drought. Taking another step in this direction, it introduced incentives to motivate people to recycle grey water and harvest rain after the storage level of Lake Victoria got reduced to 26 per cent in 2009. It also launched the Water for the Future initiative, under which generous rebates were given to those who installed rainwater harvesting systems or grey water recycling systems, and rallied community support for lowering household water demand. Californian water agencies are now preparing a robust urban water management plan based on Australia’s experience to tide over the protracted drought.

But blind aping may not work. “Every city is unique. So, for a sustainable water supply, there should be good coordination among the city’s regulators, urban planners and hydrologists,” says Partha Sarathi Datta, water and environment expert who was formerly the director of the Indian Agricultural Research Institute in Delhi. Planners understand the growth of cities, population, water demand and infrastructure, while hydrologists have the know-how to gauge changing rainfall pattern, surface and groundwater reserves and recharge potential of the city. Together, they can also help a city diversify its water resources and avert a Cape Town-like crisis. Water crisis took a toll on the African metropolis because the authorities depended on reservoirs as the sole source of water supply. So when the monsoon ditched the city for three consecutive years, they had to declare Day Zero. On the other hand, Singapore with no water resources has been able to meet its ever-growing water demand by tapping multiple sources!

Surrounded by seawater, Singapore is almost half the size of Delhi. “We do not have aquifers or groundwater,” reads the website of its Ministry of Environment and Water Resources. Yet clean water flows at the turn of almost every tap in the city-state. This achievement has its genesis in the 1972 Water Master Plan, which outlined a diversified water resource portfolio to cover future water and development needs. Today, rainwater, imported water from Malaysia, recycled used water and desalinated water, together known as the four national taps, form a robust water supply system. The city harvests every drop of rain that falls on almost 65 per cent of its ground. A network of canals and drains, spanning 8,000 km, direct the harvested rainwater to reservoirs, where it is treated and made potable. The Public Utilities Board (PUB) also supplies high-quality treated wastewater, called NEWater, which meets 40 per cent of the water demand. To further bolster its water security, the nation has improved water loss through leakages from 9.5 per cent in 1990 to 5 per cent in 2016, one of the lowest rates in the world. Given that the city’s water demand is going to double by 2060, PUB is now busy expanding the rainwater catchment area to 90 per cent; the percentage of recycled grey water to 55 per cent; and reducing per capita water consumption from the current 143 litres to 140 litres by 2030.

Necessity is the mother of invention, they say. To solve the water woes of Lima, the second largest desert city after Cairo, a handful of scientists and a non-profit installed huge fog nets across its informal settlements in the early 2010s. Due to its proximity to the cool waters of the Pacific Ocean, the Peruvian city has an atmospheric humidity of 98 per cent. The fog nets, four-by-six-metre bamboo and metal frames draped with a thick mesh, trap humidity and convert it into water which flows through a bio-filter, hung underneath the net, and then gets collected in huge tanks. This provides water for free to the residents.

But most coastal cities are relying on the controversial desalination for freshwater. Some 70 per cent of desalination plants in the world are located in driest cities like Kuwait, Abu Dhabi and Doha in West Asia. Analysts say these projects are not only costly but also harm the environment. “The brine discharge if not managed well can increase the total dissolved solids (TDS is a measure of water salinity) level of groundwater near sea, threatening fauna like turtles, shrimp and fish. This will affect the livelihood of fisherfolk,” says S Janakarajan, professor at the Madras Institute of Development Studies, Chennai. Researchers thus suggest cities should adopt the technology as the last resort. But these are just hollow words for those who are running out of freshwater. Cape Town, despite receiving ample winter rains, plans to set up desalination to tide over its worst drought in its history.

Another popular method to compensate for deficient rains is cloud seeding. The technology involves seeding clouds with aerosols like silver iodide, and thereby improving chances of rainfall. While the UAE, Iran and Kuala Lumpur have been using this seven-decade-old technology to tide over water crisis, the success of the technology remains statistically unproven because once a cloud is seeded, there is no way to measure how much it would have rained or snowed had it been left unseeded.

For long governments have also been mulling over river inter-linking projects as the sure shot panacea for the perennial water shortages in drought-stricken areas. While in most countries, it has remained a pipe dream due to concerns like changing the river morphology and affecting the surrounding ecosystems. But despite the concerns, India is all set to begin the project in interlinking the Ken with the Betwa in arid Bundelkhand region. China has already implemented a US $62 billion project to bring waters from its southern parts to quench the thirst of arid Beijing.

“The goal is to ensure sustainable water supply. So, before employing any project we need to assess its impact on the ecosystem,” says Datta. In Excreta Matters, Delhi-based non-profit Centre for Science and Environment, states: “Water efficiency, harvesting rain, recycling and reusing wastewater are the best options followed in different parts of the world for a sustainable supply.” Blanca Jimenez-Cisneros, director of Unesco’s water sciences division, also advocates making the most of available water resources by reusing and recycling it (see interview on facing page).

Urban areas will continue to expand. Global climatic changes will accelerate and worsen, especially if we delay the transition to clean energy. The sooner we accept these facts, the sooner every city can move to manage water in a more sustainable manner.