The Taliban are set to overtake Kabul; but an expert believes they will spare the age-old Karez system of underground aqueducts in the country given its importance 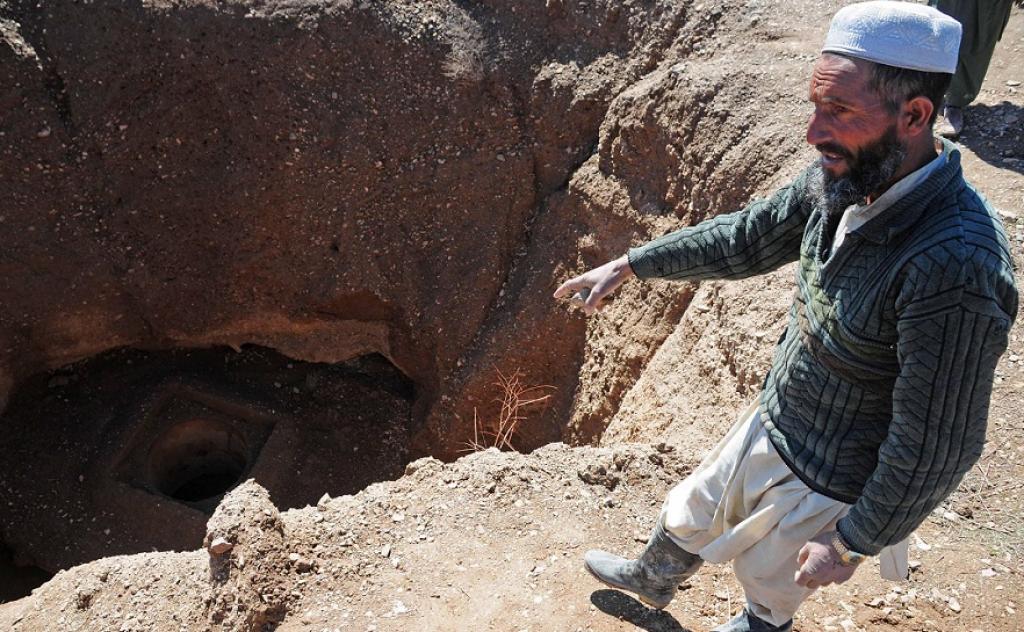 An Afghan worker shows a collapsed Karez in Herat province in 2010. US-led coalition troops and the Afghan government had worked to rebuild it and provide water and work to locals. Photo: Wikimedia

The resurgent Taliban is on the victory march to Kabul. It has already taken provincial capitals as well as Afghanistan’s third-largest city of Herat. As the Taliban appear at the gates of Kabul again after two decades, fears have grown about what their conduct will be towards life and livelihood, the economy, systems, institutions and even towards cultural artefacts.

One of those apprehensions is about the Taliban’s water policy. After the Taliban took over Herat August 12, 2021, fears have grown about the fate of the internationally financed Afghan-India Friendship Dam, formerly the Salma Dam, on the Harirud River. It is the main source of electricity and irrigation water for hundreds of thousands of people in western Afghanistan.

Given the grim precedent of the Taliban bombing the statues of the Buddha in the Bamyan Valley in 2001, amid global outrage, the world is justified in being concerned.

Water, or the lack of it, is an issue in Afghanistan today. In their December 2020 paper Sustainable Irrigation: Karez System in Afghanistan, Abdullah Azami, Zhanay Sagintayev, Sayed Hashmat Sadat and Hejratullah Hejran wrote that Afghanistan, a semi-arid country, was losing its northern and central mountain glaciers due to climate change.

These glaciers provide meltwater to people, especially in rural areas. The authors say this is done through three types of water management and irrigation systems in Afghanistan: Surface water or canals, underground water or borewells and Qanat / Karez.

The last system had the potential to be the answer to many problems of water in Afghanistan, the authors noted. But would it survive the second stint of the Taliban?

V Govindankutty, assistant professor of geography at the Government College Chittur in Palakkad, Kerala and an expert on this system, dismissed such fears:

I am not sure they will be damaging these systems because these are basic water supply lines. These sustain the life of people there. There is no other water source. This being a Persian system that evolved there and having been passed on from generation to generation also makes it important to the locals.

In fact, the Qanats / Karezes were at the root of a diplomatic fiasco in May 2009 between the US forces and locals, according to the Wall Street Journal. The Americans blew up a series of Karezes in the country in order to expand a military base and accommodate more troops.

The locals protested and the Taliban took advantage and started propagandising against the US and the Afghan government whom they supported.

What is a Qanat / Karez?

This system of underground vertical shafts in a gently sloping tunnel that is built from an upland aquifer to ground level, is in fact present in several countries.

Some historians and archaeologists have attributed people in the southeast Arabian Peninsula as the first developers. Others, however, ascribe it to the ancient Persians.

The Qanat / Karez system, wherever it was developed, soon spread to many Persian, Arab and Turkic lands. It even came to the Indian Subcontinent during the 800-year-old Islamic Period.

Some 9,370 Karezes were operating in 19 Afghan provinces, according to the authors of the 2020 paper, “with the majority of them concentrated on the eastern, southern and western flanks of the Hindu Kush mountains.”

They also noted that the system was more widespread in the southwest and south, “with fewer Karezes in the north”.

Several Karezes have been destroyed in the more than 40 years of war in Afghanistan since the Soviet invasion in December 1979. Farmers have begun to abandon them and have shifted to mechanised borewell systems.

Kutty said the importance of the Qanat / Karez was so much that their destruction was impossible. The system was brought in the Indian Subcontinent during the Bahamani Sultanate, founded by Alaudin Bahman Shah. It later broke into five other Sultantates: Bijapur, Golconda, Ahmadnagar, Bidar and Berar.

The Bahamani Sultanate was Persianate in nature and encouraged many things Persian, among them, the Karez.

Kutty, who has studied the Karezes of Karnataka, described the beauty of the first Karez system in India that was built in the city of Bidar during the reign of Bahamani Sultan Ahmad Shah Wali (1422-1436), who shifted the capital from Gulbarga to Bidar.

He said the system made maximum use of the watershed:

The entire system is a planning and execution of the forces of a watershed. The rulers used to execute the city plan within the watershed. They made sure that wastewater never mixed with drinking water. By the 15th century, Bijapur city had a network of pipelines. Everyone got 24x7 supply of water. It also worked as confidence-building measure between the Sultan and his subjects since the Karez was built the state.

His comments on the Karez being the only water supply in certain provinces of Afghanistan is very important considering that these places are in the south and southwest of the country according to the paper.

These are part of the ‘Pashtun Crescent’, the heartland of the Pashtuns, the main ethnic group in the Taliban and the country’s largest ethnicity. Kandahar, the traditional Pashtun capital, where the Taliban emerged in 1996, is also located in this area.

And if that is not solace enough, here are some more points of the system’s importance that the paper mentions. Karez systems cover eight per cent of irrigated land in Afghanistan.

They are the only source of water in the majority of rural communities in southern and southwestern regions of Afghanistan.

They are energy efficient and green since they use the force of gravity rather than any machines running on fuel.

Water in them does not evaporate and is also filtered till it comes to the surface. There is no depletion of the aquifer since excessive use is impossible. Its maintenance is also low-cost, say the authors.