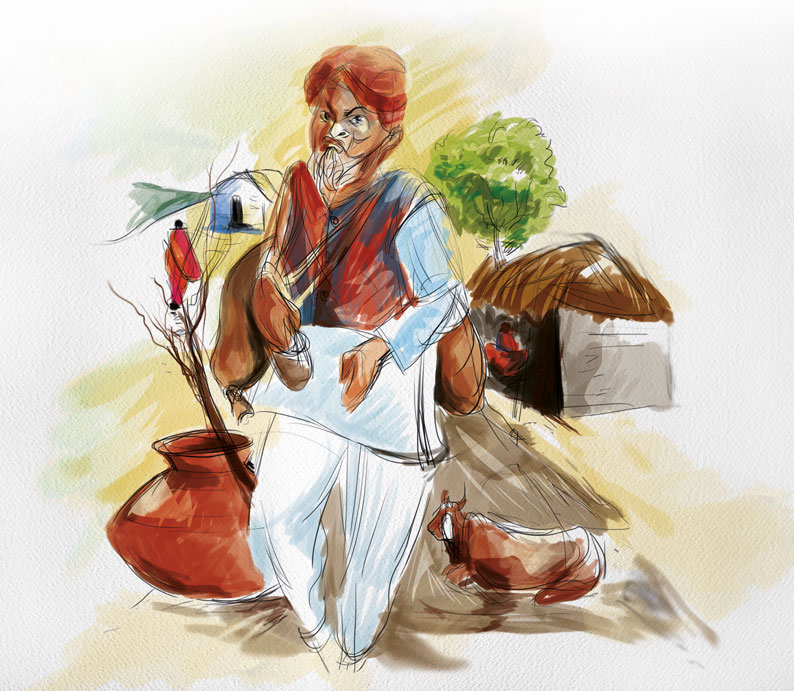 If one were to read Rudyard Kipling’s poem Gunga Din today, little could be understood of whom the poem was about without the help of Google, our digital life-partner. The 19th century poem is about a fictional character called Gunga Din, a Bhishti or a traditional water carrier who serves water to soldiers serving in the colonial British army. Not many know of the Bhishti today, and if they do, there is little chance that they have seen many of them lately.

Commonly found a few decades ago, the Bhishti would carry water to shops, houses and other public places in a mashak or a bag made of animal skin to quench people’s thirst. Mostly Muslim, the Bhishti were a backward caste. Since Hindus would not drink out of an animal skin bag, the job was done by paniwallas or water bearers who carried the water in earthen pots. “The Bhishti live in old parts of many cities where the government’s pipelines have still not reached some homes and shops. They fetch water for the people from a hand pump or a river,” says Nidhi Dugar Kundalia, journalist and author of the book, The Lost Generation: Chronicling India’s Dying Professions. She adds that they can still be found in the old parts of Delhi, Kolkata, Hyderabad and Lucknow, but their sightings are far and few between. With easily available bottled water, cheap cola drinks and portable water coolers providing water at R2 a glass, there is no demand for the manual labour of Bhishti and the occupation is seeing an almost certain death.

Modernisation may have made life easier, but it has also wiped out many traditional occupations and communities worldwide. With their extinction, an entire part of our culture, history and traditional wisdom has been lost forever. Sometimes, such a loss is to our detriment. Take, for instance, the community of traditional water managers who thrived in the rural interiors of India. They would manage the distribution of water and arbitrate in case of conflicts to ensure peaceful access to water resources.

They are known by different names in different parts of the country. In Tamil Nadu, Andhra Pradesh and Karnataka, the water managers, known as Neerkatti, would manage traditional water tanks and ensure supply to all fields on a rotational basis. They were responsible for the release and equitable distribution of water. They would decide when the tanks were to be desilted and the work was divided among the tank’s beneficiaries. With the first rainfall, they would take stock of the water situation and decide which crops were to be sown.

But with advancement in groundwater irrigation and electrified wells, the reliance on traditional tanks diminished. Many farmers also shifted from agriculture to other high-paying non-agricultural sectors or migrated to urban areas, further reducing the demand for services provided by the Neerkatti. Traditional water managers in other states are faced with a similar fate. The Kollalu in Uttarakhand, who would ensure that a second rotation through traditional water channels would not begin until the last farmer had got his share, the Churpun in Ladakh, and the Patkari, Jagaliya or Havaldar in Maharashtra are other examples of water managers who are losing the battle to modern irrigation techniques.

While some managed access to common water resources, others were known for their expertise in creating them. The Bhovi or Wadda were a community of traditional earth diggers, who were believed to have migrated from Odisha to southern Indian states. According to the Global Encyclopaedia of the South Indian Dalit’s Ethnography, Volume 1, Bhovi is a corrupt form of bhavi, which means a well. It also means earth-digger in Kannada. They are known as Odden or Vodden in Andhra Pradesh and Boyan, Odde or Naickan in Kerala. Folklore of one such community, the Od, states that an ancestor once vowed never to drink twice from the same well again. So he dug a new well every day, until one day he dug into the earth and never returned. It was in honour of this ancestor that the Od took to working as earth diggers. They were known as indigenous civil engineers who constructed ponds, walls, structures, canals and embankments. 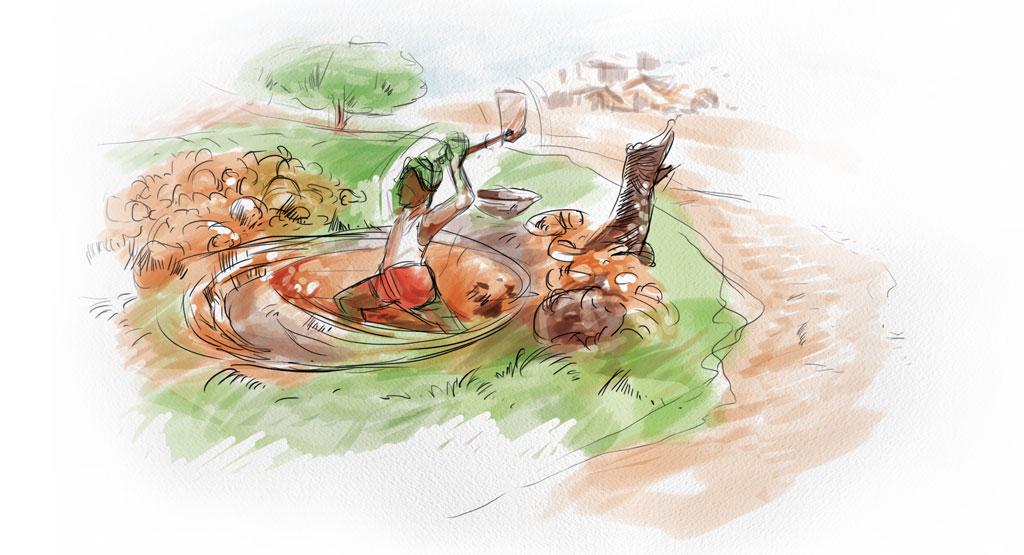 Another expert tank-digging community in Odisha are the Kulthos kultas. According to a book titled Tanks in Eastern India: a Study in Exploration, the Kulthos kultas migrated to Odisha around the latter half of the 18th century and brought with them the unique art of building tanks of all sizes. Their role is, however, contested by experts because ancient reservoirs already existed in the region. Tribes such as the Binjhal, Kondh and Gond also claim that tank design had been evolved by their ancestors based on the region’s topography.

The lack of demand for the skills of such well-digging communities and their subsequent migration has compelled them to disperse and only a few of them practise their traditional profession today.

Boat-making has a rich cultural history, especially in Balagarh, West Bengal. The boat makers of this region are skilled in making wooden boats and the profession has been passed down the generations. The boats are treated with reverence. Before being launched into the river, every newly made boat is decorated as a bride leaving for the home of her in-laws. It is adorned with kumkum, turmeric, saree and mango leaves.

Boat-making and the traditions associated with it vary from region to region. But very few are willing to carry the baton forward. “Sons and grandsons do not want to take up the profession anymore due to the preference for fibre boats, which are cheaper and more long-lasting. Secondly, boat-making requires a lot of skill. Most of these children now go to school and college and barely have the time to pick up the skills from their fathers and grandfathers,” Dugar Kundalia says.

Modernisation is also affecting the survival of traditional fishing communities. The practice of Kattu Maram (catamaran) marine fishing in Tamil Nadu is facing competition from mechanised boats. The Kattu Maram is a light boat made of timber and is rowed manually. Fishing communities, which depend on the East Kolkata Wetlands, are also struggling to make ends meet. In the 1920s, when water from the creek connected to the Bay of Bengal stopped flowing into the wetlands, the fisherfolk were left with no livelihood. They then developed a unique habitat for fish by introducing wastewater flowing from the city into the wetlands in a controlled manner. Detaining the wastewater for a period of time enhanced the growth of algae. There was no need for adding any other nutrients to the water. Fish that fed on these algae were caught and sold in the market. The East Kolkata Wetlands are, as such, the only Indian wastewater wetland enlisted in the Ramsar Convention for the conservation and sustainable use of wetlands signed in 1971.

“This is the sustaining theme of a practice which is struggling against immense pressure from real estate dealers and administrative apathy for the past few decades,” says Dhrubajyoti Ghosh, regional chair for South-Asia in the Commission on Ecosystem Management, International Union for Conservation of Nature.

Only one community is proving to be an exception to the trend. Water diviners or people who predict the groundwater level are in considerable demand, given the current water crisis from consecutive droughts and falling groundwater tables. C N Gunapathy, a water diviner from Coimbatore in Tamil Nadu, uses a metallic bulb pendulum of different alloys—depending on the soil type—to predict the level of groundwater. An oscillating pendulum indicates the presence of groundwater and Gunapathy determines its depth depending on the movement of the bulb. He claims he has divined the presence of 1,000 sources of groundwater so far with an error margin of around 30 metres. “Thirty years ago, I had heard of water diviners who predicted the water table and thought of giving it a try. It came naturally to me. I believe only two in 10 people have this ability,” he says in chaste Tamil. He adds that he is not aware of the science behind this technique. Ravi Mokkapati, a water dowser (diviner) from Hyderabad and alumnus of the Indian Institute of Technology, Madras, explains, “The dowsing tools detect minute deviations in the Earth’s magnetic field caused by many factors, including underground water. The human body interacts with the magnetic field, thereby generating minute signals in the body.”

Many traditional water-related occupations are often discarded for the lack of scientific evidence. “The learned always look down upon the knowledge of the ordinary who are better at interacting with nature and natural resources,” says Ghosh in their defence. We must be ready to learn about ecology from them, he adds.