Power generated by waves can be can be forecast with a high degree of accuracy without much variability for hours at a time, which is a huge advantage for any renewable source, says study 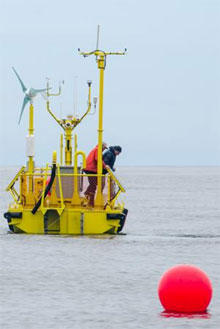 Energy from ocean waves is more reliable and could prove cheaper, say scientists. Oregon State University (OSU), in its findings published in the journal Renewable Energy,  has asserted that wave energy in areas with high potential, such as northwestern Pacific, will be comparatively stable and can be integrated into the grid at lower costs, especially wind power. This study was a collaboration of researchers at OSU, the University of Victoria, and industry.

According to the report, power generated by waves can be can be forecast with a high degree of accuracy without much variability for hours at a time. This is a huge advantage for any renewable source since power from renewable sources is intermittent and unreliable. The study examined the hypothetical addition of 500 megawatts of generating capacity in the region by 2025, which would be comparable to approximately five large wind farms.

The predictability is also important for grid integration of renewable power. Ted Brekken, associate professor, College of Engineering at OSU, opined, "By producing wave energy from a range of different sites, possibly with different types of technology, and taking advantage of the comparative consistency of the wave resource itself, it appears that wave energy integration should be easier than that of wind energy.”

However, wave energy is not a commercially viable, not even in the Pacific Northwest, but like any technology, costs would come down with more deployment. The Pacific Northwest has some of the US’ best wave energy resources, and is home to the Northwest National Marine Renewable Energy Center, supported by the U.S. Department of Energy. “Wave energy off the West Coast has incredible potential. Now we have reached an important step in the leasing process for the nation’s first grid-connected facility in federal waters to test commercial-scale wave energy devices.” said Walter Cruickshank, acting director, Bureau of Ocean Energy Management (BOEM), a US government agency.

It is imperative that new forms of energy like wave energy are explored and develop for economic growth especially to diversify the energy portfolio for any country.