That's where the Asian sea horses might be headed 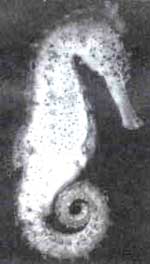 ASIA'S once-abundant sea horse population has gone down drastically in recent years, owing to heavy demand for their use in traditional medicines, aphrodisiacs and aquariums, said conservationists. Destruction of their habitat is another major cause for their decline, they say.

"We're dealing with a situation where we still have some time," said Heather Hall of London's Zoological Society. "But now, there is grave cause for concern," she added.

About 40 conservationists, including Hall, and traders in medicinal and commercial products derived from these endangered sea horses and various other marine species met in central Cebu city, Philippines, recently to discuss ways of saving these sea creatures without resorting to a ban on their collection.

Asian nations, including Philippines, India, Vietnam, Thailand and Indonesia, are among the world's largest exporters of live and dried sea horses. No extensive inventory of sea horse populations exists but drastic declines in catches have been reported all over Asia in recent years, indicating their diminishing numbers, said Amanda Vincent, a biologist from Canada who has done extensive research on these creatures. In the Philippines, for instance, sea horse catches have declined by as much as 70 per cent in some areas, she added. There is no laws in the country that specifically protects these sea horses.

The Philippines supplies about five million sea horses annually to China, Hong Kong, Japan, Taiwan, Singapore and South Korea, with demands that far exceed their supply. Sea horses thrive mostly in shallow warm tropical seas and are unique due to their unusual horse-like appearance, their ability to change colour to avoid predators, and the reproductive role of males, which bear the offsprings.

These creatures have been used since ancient times as a cure for a wide variety of ailments, including asthma, stomach aches, colds and tooth aches. They are also used as aphrodisiacs and as charms to ward off evil spirits. An estimated 20 million sea horses are exported to over 40 nations every year.

Vincent said the continued depletion of these creatures will eventually affect the impoverished Filipino fisherfolk who depend on sea horses for their livelihood. She said for the first time, the four-day Cebu conference brought together conservationists, traders and Chinese medicine practitioners to chalk out way and means of protecting the sea horses from a bleak future of impending extinction.

In 1995, Hall , along with several other conservationists and a local environment group, established what they claim to be the world's first sea horse conservation project in Handumon, a sea horse fishing village in central Philippines. She said the project has successfully encouraged most of the Handumon fisherfolk to set up marine sanctuary for sea horses and a few other marine species. The fisher-folk also gather fisheries data and replant mangroves, becoming a model for sustainable marine resource management.