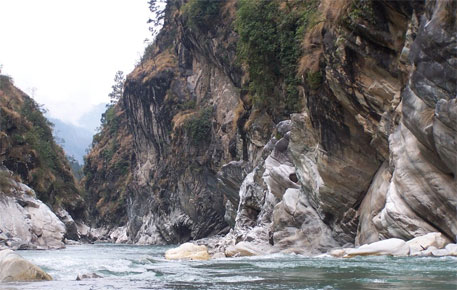 The findings of a World Bank inquiry panel on the possible adverse impacts of the proposed Vishnugad Pipalkoti hydroelectric project on the Alaknanda river seems to have made the Centre jittery. It is learnt that the ministry of power has requested World Bank, which is funding the project, to keep the report under cover till the Maha Kumbh Mela at Allahabad gets over. The request was made in order to avoid agitations that the findings may trigger while Hindu pilgrims, sadhus and spiritual leaders congregate at Allahabad, located on the banks of the confluence of the Ganga and the Yamuna, from mid-January.

The Vishnugad Pipalkoti hydro electric project in Uttarakhand's Chamoli district, with an installed capacity of 444 MW, is proposed as a run of the river project. Such projects involve diverting the river into a tunnel, leaving very little water in the natural stream. Religious leaders have been protesting against such projects that reduce the flow of the Ganga, of which Alaknanda is a major tributary. The project will also involve diversion of forestland and may impact the Kedarnath Wildlife Sanctuary.

The project proposes a 65 metre high diversion dam on the Alaknanda. The reservoir will have a gross storage capacity of 3.63 million cubic metre (mcm). The World Bank had started appraising the project in 2006 and extended a loan of US $648 million last year for the project, expected to start this June.

The World Bank inquiry was prompted by a complaint by economist Bharat Jhunjhunwala, a retired professor of Indian Institute of Management in Bengaluru, and others, made to the investigation panel, an internal accountability mechanism of the World Bank. The complainants said the project will have grave social, cultural, environmental and spiritual impact. They said the project would result in the “withering of the Ganga”. They said there was no cost-benefit analysis of the project, it still hasn’t got forest clearance and that it affects the social and cultural fabric of the nation.

On the basis of the complaint, the World Bank formed a four member panel to investigate the matter. The panel visited the site, spoke to the complainants, people likely to be affected by the project and the project developer, Tehri Hydro Development Corporation (THDC), and submitted its preliminary findings to the World Bank’s board of directors in November last year. The board gave a go ahead to the panel to carry out a detailed investigation into the project. 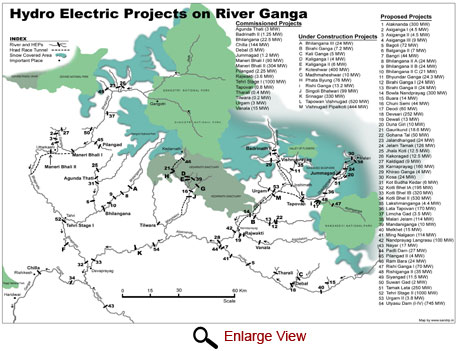 Joe Athialy, Bank Information Centre’s coordinator for South Asia, said that the ministry of power is not very happy with the investigation being carried out by the World Bank into the project as it claims these matters are already under the national purview and are being investigated by the B K Chaturvedi committee; therefore it thinks that a parallel inquiry by the World Bank panel is inappropriate. The Bank Information Centre is an independent monitoring agency that partners with civil society in developing and transition countries to influence the World Bank and other international financial institutions to promote social and economic justice and ecological sustainability.

None of the documents related to the investigation and the complaint is available in the public domain. Industry journals have been reporting about the discontent among the ministry officials over the World Bank investigation. “It is interesting to see that what the industry, the ministry and World Bank knows, is out of the reach of public who matter the most here,” said Himanshu Thakkar of non-profit South Asia Network on Dams, Rivers & People.

According to sources in the World Bank, the declaration of preliminary reports and the detailed investigation have been delayed till March 15 on ministry of power’s request as Kumbh Mela will go on till then. Jhunjhunwala confirmed that World Bank officials told him that the ministry of power has requested them to postpone everything till the Kumbh is over.

The jitters that the ministry of power has been getting over the findings on these complaints indicate that there is something that may jeopardize the project, say activists protesting displacement caused by dams.

That may be the reason why the officials have also being delaying the reports of B K Chaturvedi committee to review existing and ongoing hydroelectric projects on Ganga and its tributaries, Jhunjhunwala added. The BK Chaturvedi committee, an inter-ministerial committee headed by Planning Commission member B K Chaturvedi, was constituted in June 2012 by the Prime Minister's Office to recommend the flow that should be maintained in the Ganga and its tributaries. It will also suggest how the existing power projects should be altered to achieve the required flow, keeping in mind the impact on tariffs. It will also review the environmental clearance granted to existing and upcoming projects and suggest what changes need to be made to the conditions laid down for those who get the nod. The committee was asked to submit the reports in September, 2012.

According to Bharat Jhunjhunwala, the World Bank investigation has unnerved the ministry of power since the issues raised by him and others are applicable to all hydroelectric power projects funded by all the multilateral agencies.

If the panel in its detailed investigation finds anomaly in the project, the World Bank could withdraw its funding from the project. “It happened in the case of Sardar Sarovar Dam over Narmada. The World Bank was initially funding SSD, but withdrew in 1994 after widespread agitation,” said Joe Athialy.

While World Bank officials did not elaborate on the issue, several senior officials of the ministry of power refused to comment on the matter.