As the seven-day World Immunization Week (April 24-30) ended on Thursday, WHO representative to India, Nata Menabde, told Down To Earth the challenges the country faces 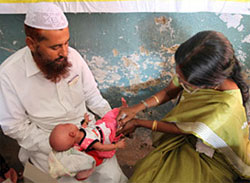 What is the vaccination scenario in India? Is it going fine or off track?

Recent estimates show that 65 per cent children between 12-23 months have received all available vaccines against vaccine preventable diseases under the Universal Immunization Programme in India. The Government of India is implementing Mission Indradhanush, a phased-special immunisation catch-up campaign, to rapidly augment routine immunisation coverage in the country. The routine immunisation programme is currently on track for improving vaccination coverage.

What is the current target set in India? How many children are to be vaccinated and by when?

The current target set in India is to achieve full immunisation coverage of at least 90 per cent children by 2020. The ultimate goal is to protect the children against life-threatening vaccine preventable diseases.

Why is the immunisation rate poor in Asian and African countries? Where does India stand in respect to immunisation?

It is being estimated that the national immunisation programme is yet to reach out to 8.9 million unvaccinated and partially vaccinated children with all available life-saving vaccines. The main reasons for missed children are lack of awareness in the community or myths about vaccination, fear of injections and inadequate service delivery during routine immunisation sessions.

Intensive efforts are going on to increase routine immunisation coverage through special campaigns and through strengthening of the immunisation system.

Which states in India have performed well in meeting the target and which states are lagging behind?

According to a recent survey, 10 states in India have performed well. Of these 10 states, two states (Kerala and Himachal Pradesh) have been able to vaccinate more than 80 per cent children with all available vaccines. Eight states (Haryana, Punjab, West Bengal, Maharashtra, Karnataka, Telangana, Andhra Pradesh and Tamil Nadu) have achieved 80 per cent full immunisation coverage. Three states (Uttar Pradesh, Meghalaya and Nagaland) are lagging behind in routine immunisation.