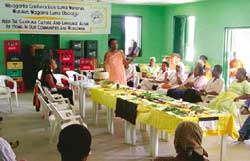 The University of West Indies Language Unit, Kingston, Jamaica and unesco launched the first authoritative website on Caribbean Indigenous and Endangered Languages: http:// www.mona.uwi.edu/dllp/jlu/ciel/pages/index.htm. The website showcases and promotes the preservation of over 20 indigenous languages in the region. Caribbean indigenous languages were produced over thousands of years. In the 500 years since the arrival of Europeans, most of these languages and cultures have either disappeared or are seriously endangered.

"My team has conducted extensive interviews to collate data pertaining to indigenous languages of the Caribbean. We have also consulted written sources, wherever they were available," says Hubert Devonish, professor of Languages at the University of the West Indies. unesco is now exploring the second phase of this project which involves production of books of stories and cultural information bilingually, in indigenous languages and English, supported by audio and video material.