Weed out the menace 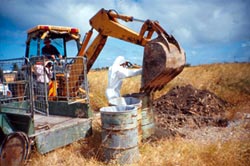 adding small amounts of seaweed to ddt-contaminated sites can effectively break down the deadly pesticide, as per an international team of researchers. During a series of experiments, the researchers found that too much seaweed hindered the degradation of the pesticide. "But an effective mix of 0.5 per cent seaweed added to proportionate amount of waterlogged soil can remove 80 per cent of ddt present in a site for over six weeks," claims Ian Singleton, the lead researcher, who is working in the University of Newcastle upon Tyne, the uk.

Singleton and his co-researchers discovered that the breakdown of ddt depends on particular microbes, which function best without oxygen. Therefore, they used waterlogged soil, mostly devoid of oxygen, to encourage the growth of the microbes. Seaweed, on the other hand, was found to be a good source of sodium, which disperses the soil, thus exposing ddt to large number of microbes; it also affects the amount of dissolved organic carbon in the soil, which makes a difference in the way the organisms degrade the contaminant. When too much seaweed is used, the dissolved carbon and excess sodium gets in the way of the degradation process.