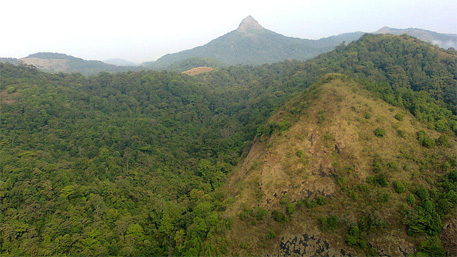 The report submitted by the expert panel constituted by the Kerala government to review the Kasturirangan panel report on the Western Ghats has led to new controversies. Environmental activists and a section of the political leaders strongly oppose a few of its key recommendations. They allege the committee has sidelined the objective of conserving biodiversity of the Western Ghats while protecting encroachments.

The three-member committee headed by the Kerala State Biodiversity Board (KSBB) chairperson Oommen V Oommen was constituted in October 2013 in the wake of agitations, mainly in the high-range districts of Idukki, Wayanad and Kozhikode, against the draft notification issued by the Ministry of Environment and Forests (MoEF), accepting the recommendations of the Kasturirangan Committee on Western Ghats conservation. The recommendation of the Kasturirangan panel included banning activities like mining, quarrying, construction of thermal power plants and highly polluting industries and construction of buildings spread over more than 2,000 square metre and townships spanning more than 50 hectares (ha) inside areas identified as ecologically sensitive areas (ESAs). In Kerala, the committee had identified 123 villages across 12 of the 14 districts as eco-sensitive areas.

However, the report of the state’s panel submitted to chief minister Oommen Chandy a few days ago has concluded that the method adopted by the Kasturirangan panel to identify ESAs cannot be justified. The panel points out that as per the Kasturirangan panel, if 20 per cent of the area of a village is ecologically sensitive, the whole village comes under ESA, even if the remaining 80 per cent is highly populated and urbanised. In a state like Kerala, where population density is very high, the Kasturirangan panel’s identification of ESA leads to serious problems, says the state panel. A majority of the 123 ESA villages in Kerala have a population density more than 250 people/sq km, points out the panel.

It recommends conducting physical verifications of the ESA villages identified by the Kasturirangan panel and Ecologically Sensitive Zone 1 & 2 suggested by the Western Ghats Ecology Experts Panel (WGEEP) headed by Madhav Gadgil. Within a village, says the state panel, all populated areas, farm land and plantations should be excluded from ESAs. The verification should be done by a committee consisting of representatives from local bodies, biodiversity management committees, revenue, forest and agriculture departments. The state panel also says the recommendation of the Kasturirangan report to maintain a 10 km buffer zone around the ESA is not practical since the areas are highly populated and declaring buffer zone will affect infrastructure development in these areas.

“From the conservation point of view, the Kasturirangan report itself was a diluted one compared to that of the Gadgil panel,” points out C R Neelakandan, well-known environmentalist in the state. “The state panel’s report further dilutes the objective of conservation. The committee has also recommended conditional permission for quarrying beyond 500 metre from forest boundaries, while the Central Empowered Committee appointed by the Supreme Court has suggested mining should not be done within one kilometre around the protected forests. It also says sand can be mined from dams and reservoirs after holding sand auditing. Activists point out that quarrying and sand mining in the Western Ghats area is increasing day by day, and recommendations of the state panel will encourage these activities that damage the ecology.

Another recommendation by the panel that drew severe criticism from activists and forest officials is one that suggests repealing the Kerala Forest (Vesting and Management of Ecologically Fragile Land) or EFL Act. The state enacted EFL Act in 2000; the Act came into force in 2005 with effect from 2000. The Act was formulated for the conservation and management of private land with forest cover contiguous to reserved forests, and minimising degradation of forest eco-system and biological diversity. According to G J Teggi, additional principal chief conservator of forests, who is the state’s custodian of the ecologically fragile land, 14,000 (ha) private land was notified as ecologically fragile land.

The state panel points out that a lot of people in the Western Ghats districts expressed their fear that the ESA areas will later be declared as ecologically fragile land under the existing state legislation and will be taken over by the forest department without giving any compensation. The panel points out that the EFL Act has been misused by the forest department and it has given a lot of trouble to small farmers. There are disputes regarding the status of the EFL. While the forest department says the land is EFL, the owners who lost the land say it was cultivated land. The state government has appointed four tribunals in 2012 to settle the EFL case. Cases are going on. “The EFL legislation has already served its purpose. So it should be repealed and no more land should be notified as the EFL in future,” recommends the state panel. The courts can decide on the existing cases, suggests the panel.

However, forest officials and a section of activists allege this recommendation favours big plantations rather than small farmers. Most of the notified land under this legislation was originally vested with the government under the Kerala Private Forests (Vesting and Assignment) Act of 1971. This legislation was implemented as part of land reforms in the state that started from 1967. The vested private forests were to be distributed to agricultural workers for cultivation. No compensation is payable under this Act. “However, a number of private parties recaptured the vested land by winning cases through fabricated documents,” says Pradeep Kumar, chief conservator of forests, who was the custodian of ecologically fragile land till December 2012. Many plantations in the state have illegal possession of land notified as ecologically fragile land, says P Dhanesh Kumar, divisional forest officer, Kalpetta, Wayanad. While serving in Palakkad district, he had regained possession of 2,400 ha of EFL from 32 plantations in Palakkad district between 2008- 2011. Besides keeping ecologically fragile land illegally, many plantations have encroached on protected forests, point out forest officials.

Activists agree with the panel that there were lapses in implementing the legislation. “The Act got implemented in such a way that there was no differentiation between small farmers and big plantations,” points out Harish Vasudevan, lawyer and activist. However, repealing the legislation is not the solution to the problems, says he. The legislation should be implemented in such a way that small farmers are not troubled or they can be excluded from the purview of the Act. “The committee has already recommended excluding all the populated areas, farm lands and plantations from ESA. Then why should the people fear ESA becoming EFL in future?” asks Neelakandan. The committee did not have a mandate to look into the EFL legislation, so the recommendation for repealing the Act seems to have been made for favouring the plantations that illegally keep the EFL land, says he.

The panel has also recommended that the state government should take a decision that permission from the forest department is not needed to cut trees in private land, not only in the Western Ghats but in other parts of the state too. At present, to cut trees in private land, permission needs to be sought from the government under the Kerala Preservation of Trees Act, a legislation enacted in 1986 to curb indiscriminate felling of trees.