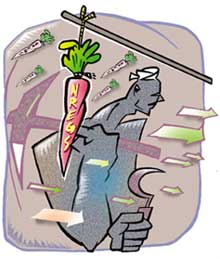 The National Rural Employment Guarantee Scheme (nregs) aims to provide 100 days of guaranteed employment to every rural household at the minimum daily wage. But barely four months after its launch, it is running into problems

If some states have seen a huge response to it, there have been few takers in others like Haryana and Punjab, where the actual minimum wage is much higher than the state government's official minimum wage for agriculture (Rs 74 in Haryana, Rs 82 in Punjab) and that decided under nregs ( which is Rs 60 ). In Haryana, only 47,250 and in Punjab, 37,870 households were registered under the scheme till April 26. "Most of the farm workers in these two states are migrants from the eastern part of the country and are paid much higher than what is guaranteed under nregs (in their states)," says Devinder Sharma, a food and livelihood expert. "The number is smaller because Punjab has only one and Haryana only two districts under nregs," says an official of the Union ministry of rural development. But that does not seem like a complete explanation because in Andhra Pradesh, for instance, an average of 300,000 households per district are registered under the scheme.

In states like Orissa, Madhya Pradesh and Karnataka, the minimum daily wage is less than Rs 60. But there have been cases where the district administration has been paying more than the Rs 60 specified under nregs. "It is a serious matter, and we are talking to the state governments to ensure that funds under nregs are not abused," says a ministry official.

According to a government press release, "the minimum wage as applicable in various States under the Minimum Wages Act 1948 would apply to the programmes. However, the Centre would step in to ensure a minimum rate of not less than Rs 60 a day in States where it was lower." Says Sharma, "To attract workers, the (state) government needs to pay at the market rate." But a ministry official clarifies that nregs is only for those unable to find a job and the Centre has not specified any minimum wage.

Another issue is the huge gap between the households registered under nregs and the jobs cards issued. By April 26, about 24 million households were registered, but only about 16 million job cards were issued and only 5.4 million people were given employment. The ministry has so far released Rs 3,190 crore to 27 states under nregs in 200 districts. "The gap between households registered, job cards issued and jobs provided is due to government's lack of commitment," says Sharma.

Besides, nobody knows what to build under the scheme. The programme is still being implemented on the lines of national food for work programme and because of that, the district administration is unable to create and offer employment, adds Sharma. In such as situation, many states face the prospects of paying huge amounts as unemployment allowance. "For a scheme like nregs to be successful, both the Union and the state governments have to work in coordination," says Sharma. The government will have to prioritise the type of works that can be included so that the scheme also increases rural productivity and ultimately, the rural economy.
Employment India Haryana Punjab Andhra Pradesh News News News Neurology Genetic Disorders Nucleic acids Medical Research Science & Technology
SUPPORT US