What is leading to Africa’s baby boom

Africa is the second-largest and second most populous continent on this planet with an estimated population in 2013 of 1.033 billion people. Its population will double in just 35 years to 2.4 billion in 2050, and is, therefore, projected to eventually hit 4.2 billion by 2100.

What drives this projected population boom?

According to the new UNICEF report,  released this month, almost 2 billion babies will be born in Africa between 2015 and 2050 and the two main driving forces behind this surge in births and children are:

More number of younger women in the reproductive age group 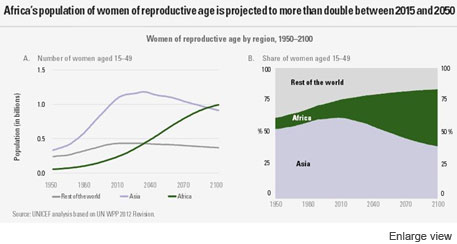 Fertility rates in Africa, too, remain much above the global average, shows the UNICEF report. Africa’s average fertility rate is in decline, and has been for decades. But its rate of decline is slow and the continent’s fertility rates remain far higher than anywhere else in the world.

In total, 15 African countries will have an average fertility rate of five children or more per woman in 2015 due to several factors, including poverty and unmet need for family planning. 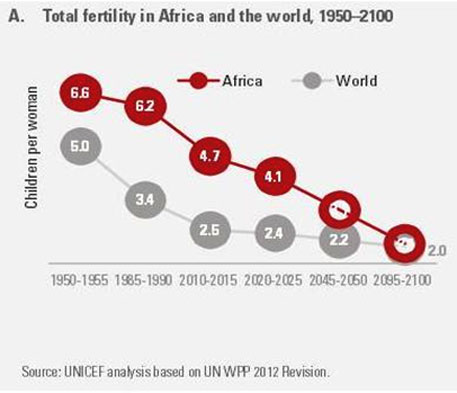 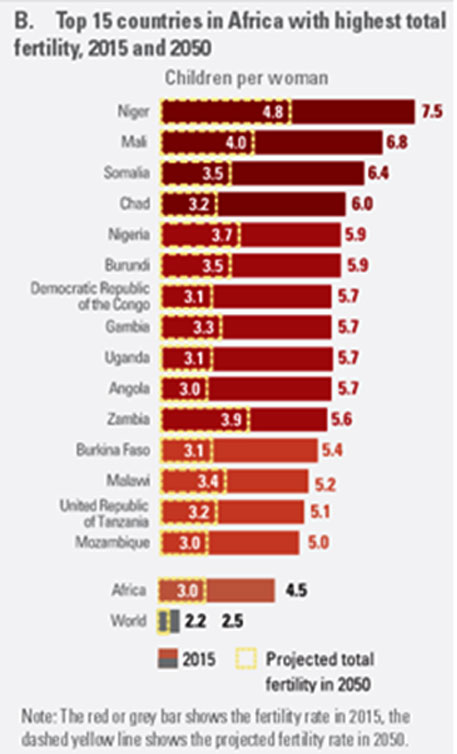 The 2014 World Population Data Sheet also shows this disturbing population scenario and warns that Sub-Saharan Africa, where fertility rates are among the highest in the world, will account for the majority of the increase. It shows that women in Sub-Saharan Africa currently average 5.2 children during their lifetime, compared to averages of 1.6 in Europe and 1.9 in North America.

An important paper, “Proximate determinants of fertility in sub-Saharan Africa and their possible use in fertility projections” points to the uneven and intermittent support of family planning programmes over the past decades in Sub-Saharan Africa.

In addition to high birth rates, the region’s population is also quite young, with 43 per cent of the population below age 15.

So, more number of younger women with high fertility rates will give birth to more babies.

In the past, population growth in many African countries was slowed by high rates of HIV/AIDS and infant mortality. But recent improvements in access to healthcare across the continent means low infant mortality rates and also that people are living longer, according to the 2014 PRB study on world population. 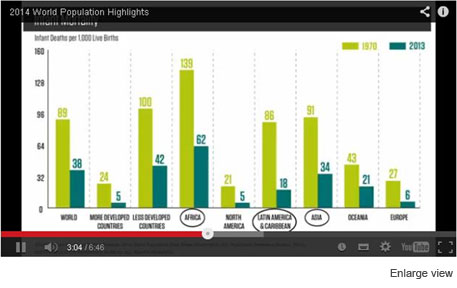 Improved child survival rate with access to healthcare facilities being among the main reasons for the unprecedented growth in African children has been reiterated in the UNICEF report. A child born in Africa today has a much higher chance of reaching her or his fifth birthday than children born almost a quarter of a decade ago. In 1990, almost one in every six African children died before attaining the age of five years; in 2012, the latest year for which estimates are available, that ratio fell to one in every 11 children born.

But despite this, in West and Central Africa, declining under-five mortality rates have been offset by increasing number of births, leaving the absolute number of under-five deaths static or increasing in absolute terms.

UNICEF analysis also shows a definite relationship between poverty and war as previously documented in this paper. The UNICEF report expresses concern that conflict and fragility continue to undermine human rights and social and economic progress in a number of African countries and notes that three in 10 of Africa’s children are living in fragile and conflict-affected contexts. It may be noted that of the 34 countries classified by the World Bank in 2014 as having fragile and conflict-affected contexts, 20 are African and around one-fourth of the continent's population resides in these 20 countries.

Six of the countries with fertility levels over five children per women are classified as fragile and conflict-affected states. These are: