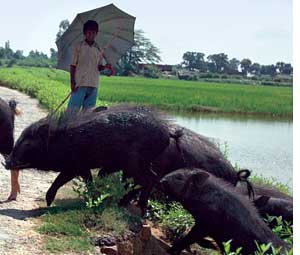 A new rotavirus strain jumped from pigs to humans

the swine flu outbreak might take down two billion people worldwide if it turns into a wider pandemic, said an official who estimate. An airborne disease with its origin linked to pig farms in Mexico, it is yet another example of the flux of genetic material between people and animals. But flu is not the only risk. A new rotavirus strain has been identified in the stool of a 34-month old child in Kolkata. It slipped into humans from pigs, say researchers. This find further underlines the need for medical surveillance in countries where man and animal live in proximity.

Every year 500,000 children below the age of five years die of rotavirus infections. In recent years, developing countries have hinted on animal to human transmissions of rotavirus strains.This prompted the Kolkata team, working with Japanese researchers, to find out if something similar is taking place in India.

Transmitted by the faecal-oral route, this rotavirus infects cells that line the small intestine, triggering severe diarrhoea. Of the seven groups (A-G) known, group A rotavirus causes more than 90 per cent of human infections.

The team detected what resembled the rotavirus A strain in the stool sample of the child hospitalized with acute diarrhoea at the BC Roy Children's Hospital in Kolkata. Meticulous scanning of the strain's genome showed a certain gene, the VP8 gene, to have about 95.1, 95 and 94.9 per cent genetic similarity with three strains of pig virus. Rest of the genetic components showed 80-90 per cent genetic identity with both human and pig strains.

"The strain might have been transmitted as a whole virus from pigs to humans where it evolved with time," said lead author Anupam Mukherjee, member of a research team from National Institute of Cholera and Enteric Diseases, Kolkata and Sapporo Medical University, Japan. Such insights into the newly evolved strain will help design new rotavirus vaccines, said the study published in the March 31 online issue of Archives of Virology.