What really happened in Uttarakhand 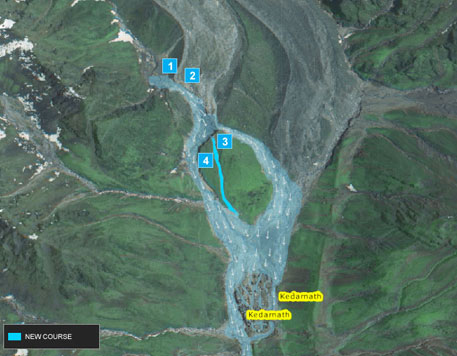 The extreme rains of June 16 this year lead to a disaster of unprecedented proportions in the Himalayan state of Uttarakhand. Many theories and explanations for the disaster have surfaced in the aftermath of the floods in the state. Now clearer satellite images of the upstream and downstream areas of the Kedar valley that have emerged are enabling a clearer understanding of the scientific and environmental reasons for the tragedy in the state.

It is believed that a massive landslide occurred upstream in the north-east region of the Kedar valley. Heavy rainfall occurred at the same time formed a small lake in the north-west of the valley. The debris from the landslide and water from the lake travelled down the slope, channelled into the glacier, and came down to Kedarnath town. The Indian Space Research Organisation (ISRO) is yet to come up with a detailed analysis but agrees with this possiblity.

The theory has been proposed by Dave Petley, professor, Department of Geography at Durham University, United Kingdom, and reported on his blog. According to Petley, high resolution images from ISRO's geographic information system (GIS) platform, Bhuvan, show that the flow of the landslide eroded a large amount of material. He has estimated rough parameters using images of the landslide retrieved from Google Earth.

The difference in height between the crown of the landslide and the channel below was about 500 metres, and the length was about 1,200 metres. Petley puts the scar width at about 75 metres, considered a large landslide. As the downside of the landslide was active and prone to erosions, it created a further accumulation of debris downstream. The amount and flow of debris was so high, that the boulders did not stop at Kedarnath and were carried to Rambara village and beyond.

Heavy rainfall that occurred in the area at the same time formed a small lake in the north-west of the valley. Under normal circumstances, the water would have flowed away. But a block formed by debris led to the accumulation of water. When extreme pressure caused a breach in the boundary of the lake, a large amount of water gushed out, forcing another rock to flow away. This created a new stream, in addition to the two streams that existed already. The amount of water, moraines and debris was high enough to increase the level of the biggest stream in the west, create a new stream in between, and increase water level substantially in the eastern stream.

Eyewitness accounts report the appearance of ‘a wall of water’. It was rumoured that a glacial lake had burst because of the rains ¬¬¬– a phenomenon called glacial lake outburst flood (GLOF). However, it is now confirmed that the disaster was not caused by GLOF, but indeed by a combination of factors,namely early rainfall, movement of southwest monsoon winds, and the formation of a temporary lake.

Uttarakhand received rain early this year. The monsoon reached the state almost two weeks in advance. These early rains coupled with other factors were responsible for the disaster that ensued. Rivers in the region already have heavier flow in June than at other times of the year because of the seasonal melting of glaciers. When water falls on ice, it melts faster; and as it rained on the glaciers of the state, the massive run-off began to swell the rivers.

An analysis of rainfall data for the past five years, available on the website of the India Meteorological Department, points to changes in rainfall trends in India, with a greater number of incidents of excess rain in Uttarakhand in June. The trends in rainfall do not indicate the kind of disastrous rainfall the state received this year, but it does point to the necessity for a robust disaster management programme, which as of now does not exist in the state.

The monsoon winds arrived early in India, and were another factor in the events that led to the Uttarakhand floods. "Monsoon has hit the entire nation early by one month. It is by July 15 that all parts of India receive rains. This year that day came as early as June 15," said Shailesh Nayak, secretary, Ministry of Earth Sciences. He said multiplicity of conditions have together created such a situation. "This year several things synchronised to lead to early monsoons," he said.

In the initial phase, called the onset phase, monsoon hit Andaman and Kerala following the normal time and trend. "However, after that the combination of lower pressure in north-western region and movement of three types of winds led to monsoons hitting other parts of the country way before their normal time," said an official in the Met department. Usually, monsoon sets in by June 1, while this time it arrived in the last week of May. It moved fast towards the north, without taking its characteristic break before hitting one region after the other.

Low pressure over east Rajasthan attracted south-westerly winds from the Arabian sea, laden with moisture. At the same time, easterly winds from Bay of Bengal came along the foothills of Himalayas. The westerlies also crossed Uttar Pradesh and Bihar, creating a trough. The mountains of the north created orographic effect (it occurs when an air mass approaches a mountain range and is rapidly forced upward, causing any moisture to cool and fall as rains).

The officials said that once the monsoon has set in, it will continue for the entire season, which normally ends in late September.

Eyewitnesses describe how a sudden gush of water engulfed the centuries-old Kedarnath temple, and washed away everything in its vicinity in a matter of minutes. Down to Earth spoke to Anil Kulkarni, glaciologist and distinguished visiting scientist, Indian Institute of Science, Bengaluru, about the events that unfolded. In his initial analysis, Kulkarni found that a small lake formed briefly during the rains, eventually releasing a huge amount of water.  Excerpts from an interview:

What exactly took place on the night of June 16?

There was rainfall of 120 mm in 24 hours before the flash flood of June 16 at Kedarnath. The town and the glacier above are 3 km apart. As there is no automatic weather station there, the data has been collected from satellite. There is evidence that a small lake was formed during the rains above Kedarnath town. The lake must have lasted for a short duration. It was a 100 square hectare lake which contained 10 million litre of water. The water that collected in the lake came down along with the water from the glacier. The lake burst due to a breach in the blockade that formed its boundary. Coupled with heavy rain in the area, this caused flash floods. It is because of the lake that there was excessive stream run-off and a third channel was formed.

How did you come to this conclusion?

Water bodies have their own geomorphological features – a typical shape and texture. Water leaves specific marks behind. We interpreted these features of the area from satellite images and concluded that there was a lake. I examined satellite images of the area before the event. Recent images as well as those as old as 2007 do not show the lake. But if the data shows the presence of the lake in the post-event scenario, we can conclude it was created during the rain and all the water was finished in the same event. We do not have continuous images; this is the best we can do.

How did the Chorabari automatic weather station work?

Wadia Institute of Himalayan Geology at Dehradun monitors the automatic weather station (AWS) at Chorabari. The last information it received from the station was at 8 pm on June 15. It seems the instrument got washed away after this. This indicates there was heavy rainfall in the glacier region on the evening of June 15.

We can say there were three reasons that led to the devastating flash floods: one, heavy rain, even though it is not unusual; two, rain on the glacier; and three, snow and glacier run-off along with the newly formed lake. Snow and ice melt faster when they come in contact with water. Rains on the glacier increased the melting rate of glacier above the Kedarnath temple.