What upsets the nitrogen balance? 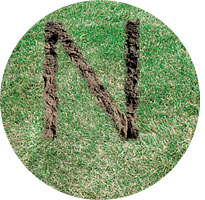 the 'N' stands for nitrogen. Although an essential nutrient for plant growth, it could sometimes sound their death knell. A recent study shows low nitrogen deposits over a long period of time do exactly that. Two factors disturb its natural balance in the environment--one, fertilizer use, and two, industrial pollution, which causes acid rain.

Several earlier studies have also implicated nitrogen for causing loss of soil fertility and increase in acid rain incidence. But the studies looked at high amount of nitrogen--25 kg per hectare (ha) per year on an average--which accumulated in the soil due to excessive fertilizer use.

The study was conducted at the Cedar Creek Ecosystem Science Reserve, a prairie site in Minnesota. It found that more than 20 years of slow nitrogen deposition led to a 17 per cent loss of plant species compared to plots that were not exposed to extra nitrogen.

The plots were treated with varying levels of nitrogen, including wet nitrogen deposition (to simulate acid rain conditions) and fertilizer deposition, from 1982 to 1991. "Even at low levels, comparable to nitrogen deposition over many industrialized nations, we lost about one plant species in six at our test site," said Christopher Clark, a co-researcher.

However, when the researchers stopped the nitrogen treatment on half the plots for the next 13 years they found that some plant species could be recovered.

Plant species have their own requirements for nitrogen. Due to the disturbance in the level of nitrogen in the soil, some plants die; others proliferate. Tilman and Clark reported that rare species such as Solidago nemoralis (grey goldenrod) and Liatrus aspera (blazing star) were more vulnerable to loss than common species.

The total nitrogen deposition figure for India is not available. "There has not been any study regarding the chronic low-level nitrogen pollution in India. Such a study will be important to understand an aspect of nitrogen pollution which has been ignored for long," says A Subba Rao, director, Indian Institute of Soil Science, Bhopal. What is known is that the total amount of extra nitrogen in the soil in India is high, at 14. 4 terragramme (one terragramme=one million tonnes). This was brought out by a study that calculated nitrogen available in the soil by subtracting the outputs from inputs in 21 agroecological zones in India.

The impact of excess nitrogen in the soil may be different in tropical countries. "At higher temperatures there will be more uptake of nitrogen by plants due to higher microbial activity," says M S Sachdev, principal scientist, Indian Agricultural Research Institute, Delhi. He says as a precaution neem coated urea should be promoted. It slows down the process of nitrate formation, enabling crops to absorb nitrogen.