When will coliform matter? 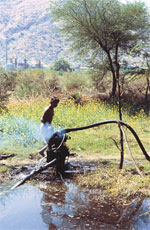 THERE is a good chance the leafy vegetables that make it to your salad bowls were irrigated using untreated or partially treated sewage. Each day an estimated 20,000 million litres of sewage is used for irrigation—five times what Delhi generates each day—but more than half of it is untreated.

Faecal matter in sewage has millions of coliform bacteria which can cause diarrhoea, typhoid or other diseases. The Union Ministry of Environment and Forests (MoEF) has set standards for permissible limits of organic and inorganic pollutants in treated sewage, but it is yet to decide on coliform.

Why the long wait

In 1989, the World Health Organization (WHO) issued guidelines setting coliform limit at less than 1,000 most probable number (MPN) per 100ml of water to be used for irrigation of crops likely to be eaten uncooked. Following the suit, the environment ministry constituted a committee in 1999 which recommended desirable limit of coliform at 1,000 MPN/100ml and maximum permissible limit at 10,000 MPN/100ml for discharge of treated sewage into a waterbody or for agriculture, aquaculture or forestry.

Subsequently, the Ministry of Urban Development formed a committee in 2004 which recommended desirable limit at 500 MPN/100ml and maximum permissible limit at 2,500 MPN/100ml for discharge into the Yamuna stretch in Delhi. As a follow up to the recommendations, the Central Pollution Control Board (CPCB) sponsored a project to study reduction of coliform through conventional treatment technologies being adopted in India.

The three-year study, published in 2008, was carried out by Anna University in Chennai and the Indian Institute of Technology, Roorkee. It concluded that treatment facilities could remove a maximum of 99 per cent coliform. But sewage contains coliform upwards of 10 million MPN/100ml, so a 99 per cent removal would not be enough to meet standards.

One of the ways of achieving 100 per cent removal, the study suggested, is following water purification processes, like chlorination, after conventional treatment. The WHO, however, advises “achieving wastewater quality close to drinking water standards is economically unsustainable and epidemiologically unjustified”. In October 2008, CPCB approved a maximum standard of 10,000 MPN/100ml for coliform.

The matter was forwarded to the environment ministry for notification, but in February 2009, the ministry, desiring more techno-economic information, suggested it needed closer scrutiny. Now the matter has been put on hold till the Indian Institute of Technology, Delhi, studies the standard proposed by CPCB and submits an interim report by March 2011.

“In my 35 years of work experience I know well that standards alone mean very little,” said D D Basu, additional director of CPCB. David Johnstone, a wastewater and standards expert affiliated with Oxford University in the UK, concurred: “The danger with legal enforcement of standards that are not achievable is that they become debased.”

Only 25 per cent of the sewage discharged by urban areas is treated and reducing coliform requires advanced treatment technologies, which are missing in most basic treatment facilities in India, Basu said. Facilities need to be supplemented with advanced treatment, like use of waste stabilisation ponds, to meet coliform standards.

Although the concept of treating ponds, which make use of sunlight for wastewater, is not new to India, they are not extensively used for advanced treatment. They have to be relatively shallow (1-1.5 metre deep). As a result, they are land-intensive, said Johnstone. The designs and maintenance of these ponds can also be a problem, he added. One such pond examined in Puducherry by CPCB in 2008 failed to perform well precisely because of these reasons.

Countries should first study and then notify standards on wastewater treatment.

For instance, the UK conducted nine studies on sewage between 1898 and 1915 to notify standards for effluent discharges. The notification included stringent standards for organic matter, suspended solids, nitrogen and phosphorous, but nothing on coliform because “there is little contamination risk from river water as it is hardly used for irrigation”, said Johnstone.
Science & Technology Water Pollution Sewage Treatment … Sewage Pollution Micro Organisms India Faecal Coliforms Central Pollution … Central Pollution …
SUPPORT US