Scientists create heaviest antimatter. It will help understand evolution of the universe 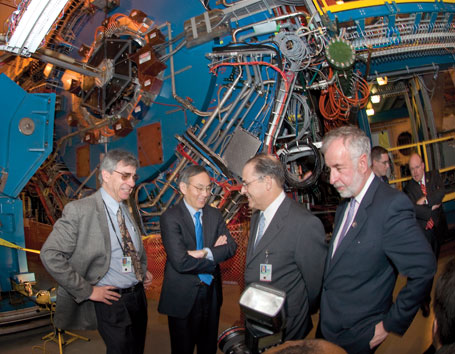 JUST after the Big Bang, about 14 billion years ago, the universe was packed with equal amounts of matter and antimatter. Antimatter contains the same set of subatomic particles as matter but with opposite charges. Protons have antiprotons; neutrons, antineutrons; and electrons, antielectrons. When the two come in contact, they annihilate each other. Scientists do not have a definitive answer to why matter won the war and the universe is composed only of matter. But it is believed a slight asymmetry gave matter an edge over antimatter, knocking it out almost entirely.

The breakthrough was made by a team of international scientists working on the Relativistic Heavy Ion Collider (RHIC) at Brookhaven National Laboratory of the US Department of Energy. RHIC is the world’s first machine that is capable of colliding ions as heavy as that of gold. The team comprised scientists from 54 institutes in 12 countries, including India. Detecting the heaviest antimatter can help shed light on the evolution of universe, which started its journey with equal amounts of matter and antimatter, says Yogendra Viyogi from Variable Energy Cyclotron Centre, Kolkata. He led the team of Indian scientists for the experiment.

Antimatter can also help search new phenomena in the cosmos. Just as heavier matter like carbon, sodium and iron are signatures of evolved life forms, heavier antimatter could help probe possibility of similar complex systems of universe made of antimatter. “The discovery of even small amounts of anti-helium nucleus in the cosmic ray would point towards the existence of stars and even entire galaxies made of antimatter,” says Alak K Ray of the department of astronomy and astrophysics at the Tata Institute of Fundamental Research in Mumbai.

In hope of finding antimatter in space, the physicists will shortly send a space probe—Alpha Magnetic Spectrometer (AMS)—to the International Space Station aboard the Endeavour shuttle. The AMS is a space-based particle physics experiment. It has been designed to track cosmic rays and particles, including antimatter.

The anti-helium also has implications for particle physics, says Subal Kar of radiophysics and electronics department at University of Calcutta. It might pave the way for understanding dark matter and dark energy which is baffling scientists for quite some time, he adds.

Making of the heaviest antimatter

Physicists at RHIC detected heaviest antimatter by colliding ions of gold into each other nearly at the speed of light. The resulting energy from the collision creates conditions similar to those that were present at the Big Bang. The resultant conditions then create quarks and anti-quarks, which are the fundamental particles of protons, neutrons, anti-protons and anti-neutrons. 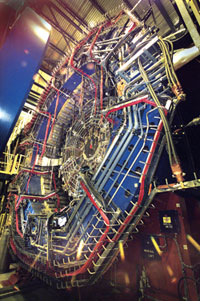 The equipment, called STAR detector, at the RHIC is able to detect exactly which particles and nuclei are produced. During the experiment it detected nearly half a trillion charged particles and a billion collisions. From this data, computers identified 18 anti-helium particles. The report was published online on April 24 in Nature.

“Seeing the birth of antimatter in conditions that simulate the aftermath of Big Bang provide insight into how antimatter popped and vanished in the early universe,” says Viyogi. Viyogi and his team of Indian researchers played a vital role in the finding. They designed a device that detects photons emanating during high energy collisions and has been installed inside RHIC.

“Unless there is a major breakthrough in the accelerator technology, it is likely that the anti-helium will remain the heaviest stable antimatter nucleus observed,” says Chitrasen Jena research scholar at the Institute of Physics, Bhubaneswar.

Physicist Paul Dirac first predicted the possible existence of antimatter in 1928. Four years later, physicist Carl Anderson discovered antielectrons in cosmic radiations. This prompted a flurry of research that created anti-hydrogen in particle accelerator at the European Organization for Nuclear Research (CERN) in Geneva in 1995. In a step forward, physicists at the Antihydrogen Laser Physics Apparatus (ALPHA) project at CERN have recently captured and hold anti-hydrogen atoms for 1,000 seconds.

They cooled antiprotons and combined them with positrons to make anti-hydrogen. The scientists could confine 309 anti-hydrogen atoms in a magnetic trap and hold them for 1,000 seconds before they were annihilated by various traces of gases. The experiment shows scientists are learning to capture more of the antimatters and to hold on to them longer before they get annihilated. This paves the way for new experiments that could demonstrate properties of antimatter that until now have been largely speculation.

Other than understanding the origin of the universe, scientists say antimatter could find use in medical diagnostics, where positrons can be used to identify different diseases. Antiprotons can be used in propulsion technology for providing direct thrust, energise a propellant or heat a solid core.