Where is the green party?

Whenever a general election to India’s Lok Sabha approaches, two questions tend to emerge: When will India get a green party? Are environmental issues important in our elections?

Our parliamentary democracy borrows its structure from the Westminster system of first-past-the-post, which makes it difficult for any pan-India issue-based party to succeed. For instance, it is no surprise there exists a Green Party in Germany that even comes to power within a coalition government, but cannot in the UK. In elections for the European parliament some years ago, the UK Green Party got a substantial percentage of votes. In other words, there is a green concern in the UK, but because of UK’s electoral system, the concern cannot translate into a presence in parliament. Of course, it is also true that in Europe, the green agenda has been incorporated as a set of mainstream issues by all parties — left, right or centre. All parties, for instance, do accept the need to protect the environment, to mitigate emissions necessary to tackle climate change and even agree to invest in low-carbon technologies such as renewables and hybrid vehicles. The challenge these governments face, once voted to power, is whether they can bite the bullet and make the structural alterations in their economy that climate change imperatives demand. This, for Europe, has been, and remains, their green Waterloo.

Consider, in this light, the conservative government of Germany’s Angela Merkel. It took on the Green Party agenda so totally that it almost marginalised the Green Party. But now, when the government has to take some tough decisions about acting on climate change, on one hand, and moving fast on the economy and job-losses on the other, its true anything-but-green colours are showing. The very German government which once stood for green matters, is now backtracking — it is seeking emissions allowance for big industry, giving the automobile industry benefits in terms of subsidies to car owners to buy new vehicles, even desperately lobbying for time for this industry to tighten fuel efficiency standards.

It is the same in the case of Australia, where, interestingly, the major political party came to power saying it was against the environmentally hostile policies of its opponent (the John Howard government). But now the new party is in power, its actions on environment and climate change are even more pathetic and miserable than its predecessor. It is tough to walk the talk when it comes to reinventing the economy for real change. It will be no surprise (it will definitely be disappointing) if Barack Obama finds he, too, has little room to make the changes he has so persuasively promised us all. 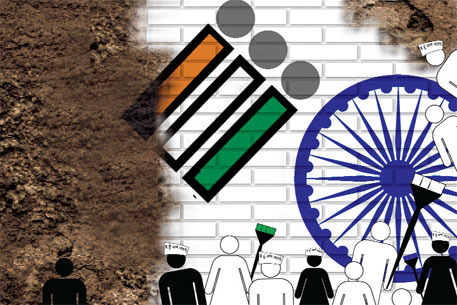 For us in India, the issue is similar, yet different. Green issues, including climate change, have made it to all major party manifestos. All the major parties promise to protect the environment, check river pollution and invest in renewable energy systems for a low-carbon economy. There are even nuances and differences in approach. The BJP, for instance, says it will also protect the tiger and other wild animals through a permanent task force, while the CPM says it will review the Environmental Impact Assessment (EIA) draft notification, which is seen as industry-friendly. In general, it is clear all ‘pure’ green issues have been listed and there is a minimum common agreement on this matter.

Here, I have questions: are these ‘pure’ green issues really the core environmental issues that need to be addressed? Can these be addressed without tackling the key issues of growth and economic change? Such questions directly lead to the nature of India’s environmental concerns. The fact is in our country, the bulk of the people depend on the environment — the land, the water, the forests — for their survival. The core environmental issue is to improve the productivity of these natural resources in a sustainable manner and to ensure the benefits of such increased productivity go to the local people, and to building a local economy and livelihood. It is about investing in the resources of the poor. It is about the political framework — the rough-and-tumble of governance — in which this investment will benefit people and build green futures.

We need to care about the pollution of our rivers because people depend on their waters for drinking and survival. We need to revise our strategy for ‘development’ because these projects take away land, or forests, critical for livelihood security. We need to invest in decentralised water or energy systems so that we can minimise the damage to the local environment and provide access to resources to all, not some.

But this is where political party manifestos get frayed on the green edge. It is easy to talk about green issues — particularly those the middle classes of India understand as ‘green’. But it is difficult to join the dots — to show how the country will green its economy itself, so that it can provide growth for all, without compromising on the present and the future generations.

Interestingly, no manifesto discusses how parties intend to deepen democracy in India — move it from the representative nature, which exists even in the Panchayati Raj system, to a participatory system. The green agenda demands that local communities must have rights over their resources and that participatory democracy — through the strengthening of gram sabhas, for instance, must work. The green agenda is a political agenda, not a technocratic laundry list.

This is why it is easy, here, to look like a ‘green party’ but not promise a ‘green revolution’.