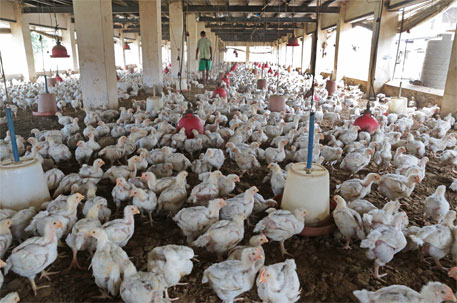 A draft resolution had been submitted earlier by several countries, including 28 member states of the European Union. Delegates submitted comments on the plan, but it was deferred for adoption as India wanted more discussion. A revised version was then finalised by an informal drafting group. This version received wide support.

Margaret Chan, WHO director-general, called it a historic moment. "Let’s move from words into action, let’s work,” she said.

Sweden said the final resolution speaks for all countries and enjoys the sponsorship of 60 countries. “I hope this committee is ready to adopt this resolution and release the first ever global strategy on that topic,” the Swedish delegate added.

The Indian delegate said the country wanted a holistic strategy before it could accept the resolution.  India had said earlier at the assembly that AMR was not just a health challenge, but also a development challenge for middle- and low-income countries.

“We will focus not only on human health but also contributing factors. We are happy of the cooperation on writing a clear course of action for all of us. We are confident and hopeful that WHO will pursue all the five routes to carry out the actions,” India said.

The UK announced £ 3 million (US $ 4.6 million) to help kick off implementation of the strategy. It will be used to help low- and middle-income countries identify the gaps and needs. This is in addition to the Fleming Fund of £ 195 million that the UK has allocated to combat AMR.

The resolution, which adopted the global action plan developed by the secretariat after the WHA of 2014, recognises that AMR mainly impacts human health even if contributing factors and its consequences extend beyond human health.

It emphasises the need for an integrated approach at regional, national and global levels in a “One Health” approach, which would involve different sectors including human health, agriculture, veterinary medicine and environment. The WHO secretariat will support the development of standards and guidance on antimicrobial residues in food, animal feed and environment as per the global action plan.

The resolution highlights that the inappropriate use of antimicrobials in all relevant sectors is an urgent and widespread problem and that there is need for a harmonised surveillance system to monitor AMR.

It also underscores the importance of technical and financial assistance, particularly to low- and middle-income countries, improving awareness, infection prevention and sanitation. The resolution urges member states to have their national action plans aligned with the global action plan in the next two years and before the WHA of 2017.

The resolution further requests the director-general of WHO to implement the actions mentioned in the plan for the secretariat, ensure tracking of resource flows for research and development, strengthen tripartite collaboration between WHO, OIE (World Organization for Animal Health), and FAO (Food and Agriculture Organization of the United Nations). Further, it urges WHO to develop options for frameworks on development, distribution, control and use of antimicrobial medicines and diagnostics while preserving existing antimicrobials and promoting affordable access to existing and new antimicrobials and diagnostics.

The resolution urges WHO to allocate adequate resources for the implementation of the global action plan and submit biennial progress reports and an interim report to the WHA next year.

India needs to do a lot to combat antimicrobial resistance

The informal discussions insisted upon by India have led to stronger and widely supported resolution. The revised version recognises greater support needed by low- and middle-income countries. Need for financial assistance and greater access to existing and new antimicrobials and diagnostics is included. More responsibility has been placed on WHO.

However, the ground reality in India is different. India is way behind on necessary control on antibiotic overuse in food-producing animals and emergence and spread of resistance from such intensive animal farm and aquaculture settings.

India does not have any time-bound action plan to address this through a multi-sectoral approach. The national policy on containment of antimicrobial resistance of 2011 fails to provide necessary focus on antibiotic overuse in animals and spread of resistance through food and environment. Resistance monitoring in humans lacks urgency and has met limited progress. There are no systems for monitoring resistance in animals and foods from them.

There is no law to regulate non-therapeutic use in animals. The Drugs and Cosmetics Act needs a lot of modifications to control non-therapeutic use of antibiotics in animals. Ineffective implementation also leads to unrestricted availability of unlicensed antibiotics in bulk. Antibiotics are not prohibited in poultry feed. The implementation of advisories by the animal husbandry department is left to the discretion of state departments.

In practice, antibiotics are rampantly used for non-therapeutic purpose such as growth promotion and mass disease prevention in food-producing animals such as chickens. Antibiotics which are critical for human use and largely responsible for resistance in humans are liberally used.

There is no national level database or a system to capture amount and trends of antibiotic use in humans as well as animals. There are no standards for antibiotic residues in poultry and dairy products. Standards exist only for few antibiotics in fish. There is minimal recognition of the need to address the environmental spread of resistance from intensive animal farm settings through waste. The existing waste management rules and guidelines fail to contain the environment spread of residues and resistant bacteria.

Veterinary education and extension services need to be upgraded. The laboratory infrastructure to help in diagnostics, monitoring and optimising antibiotic use needs a huge uplift.

A strong “political will” is critical to developing and implementing the national action plan on antimicrobial resistance.