With more than two million cases of tuberculosis, India remains on top in the list of countries carrying high burden of the disease. This fact has been highlighted in the Global Tuberculosis Report-2014 published by the World Health Organization (WHO) on Wednesday.

India and China alone accounted for 24 per cent and 11 per cent of global cases respectively. Of the 9.0 million incident cases (newly diagnosed), an estimated 550, 000 were children and 3.3 million women. 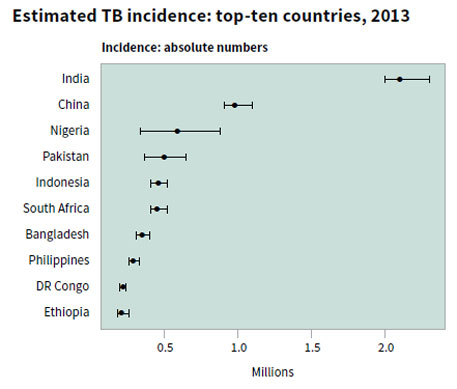 The report highlights that TB remains one of the world’s deadliest communicable diseases. In 2013, an estimated 9 million people developed TB and 1.5 million died from the disease, including 360,000 HIV positive patients.

Of the estimated 9 million people who developed TB in 2013, more than half (56 per cent) were in Southeast Asia and Western Pacific Regions. A further one-quarter was in the African Region, which also had the highest rates of cases and deaths relative to population.

Unreported cases of TB and drug resistance
According to the report, 6.1 million TB cases were reported to WHO in 2013. Of these, 5.7 million were people newly diagnosed and another 0.4 million were already on treatment.

WHO estimates that about 3 million cases were either not diagnosed, or diagnosed but not reported to national TB programmes (NTPs). Major efforts are needed to close this gap, it recommends.

Globally, 3.5 per cent of new and 20.5 per cent of previously treated TB cases are estimated to have developed multi-drug resistant TB (MDR-TB) in 2013. This translated into an estimated 480,000 people developing MDR-TB in 2013.

If all notified TB patients (6.1 million, new and previously treated patients) had been tested for drug resistance in 2013, an estimated 300,000 cases of MDR-TB would have been detected, more than half of these in three countries alone—India, China and the Russian Federation

Not so grim a picture
However, it seems the world is on track to control the disease as the WHO report confirmed that TB is slowly declining each year and it is estimated that 37 million lives were saved between 2000 and 2013 through effective diagnosis and treatment.

The report highlights that the 2015 Millennium Development Goal (MDG) of halting and reversing TB incidence has been achieved globally, in all six WHO regions and in most of the 22 high-TB-burden countries (HBCs). Worldwide, TB incidence fell at an average rate of about 1.5 per cent per year between 2000 and 2013.

Region of the Americas and the Western Pacific Region are two out of six WHO regions which have achieved all three 2015 targets for reductions in TB disease burden (incidence, prevalence, mortality). The Southeast Asia Region appears on track to meet all three targets. Incidence, prevalence and mortality rates are all falling in the African, Eastern Mediterranean and European Regions but not fast enough to meet targets.

WHO suggests that progress needs to accelerate to reach the Stop TB Partnership targets of 50 per cent reduction by 2015.

Fund gap
As per WHO, total US $8 billion is required in a year but a total of US $6.3 billion was routed to 122 countries that account for 95 per cent of reported TB cases in 2014. This left a gap of almost US $2 billion.

The apex health organisation suggests that Brazil, the Russian Federation, India, China and South Africa (BRICS), which collectively account for almost 50 per cent of global TB cases, are in a position to mobilise all or a large share of their required funding from domestic sources.

Beyond MDG
WHO has also highlighted its plan post MDG and said that the overall goal of the strategy is to end the global TB epidemic, with corresponding 2035 targets of a 95 per cent reduction in TB deaths and a 90 per cent reduction in TB incidence (both compared with 2015). The strategy also includes a target of zero catastrophic costs for TB- affected families by 2020.