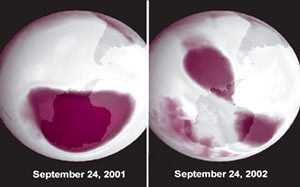 this year's ozone hole over Antarctic is not only much smaller than what it was in 2000 and 2001, but it has split into two. The so-called hole, actually an area of thinner-than-normal ozone, was measured at 15.6 million square kilometers (sq km) in September 2002 -- a figure well below the more than 24 million sq km spread seen consecutively during the last six years. The hole's total column ozone was measured below 220 dobson units.

Sadly, it's the weather rather than good environmental management that is the cause for the small size and the split, say scientists from us-based National Aeronautical and Space Administration (nasa) and National Oceanic and Atmospheric Administration (noaa). "Warmer-than-normal temperatures around the edge of the polar vortex that forms annually in the stratosphere over Antarctica are responsible for the smaller ozone loss. Temperature is a key factor in ozone loss, along with chlorine and bromine chemicals," says Paul Newman, a lead ozone researcher at nasa's Goddard Space Flight Centre. The split has resulted from the fact that the stratosphere over the southern hemisphere was unusually disturbed by wind.

In 2001, the Antarctic ozone hole reached a maximum size of more than 26.5 million sq km -- larger than the entire area of North America, including the us, Canada and Mexico combined. In the year 2000, it briefly approached 1,130 million sq km. The last time the ozone hole was as small as it is this year was in 1988, and that was also due to warm temperatures.

Ozone depletion is an annual phenomenon over the South Pole during August and September when coldest temperatures are prevalent. Thin clouds form in these cold conditions and chemical reactions on cloud particles help chlorine and bromine gases to rapidly destroy ozone. By early October, temperatures typically start to warm and the ozone layer starts to recover. The size and the duration of the hole relies on natural year-to-year variability of atmospheric conditions.

A study by Australia-based Commonwealth Scientific and Industrial Research Organisation (csiro) has recently reported that even chlorine-based chemical levels in the atmosphere are falling, and the hole should close within 50 years. "Although the ozone layer has not yet begun to repair itself, the hole would probably start closing within five years," says Paul Fraser of csiro.