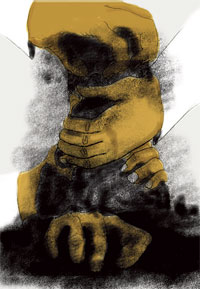 THE Union ministries of coal and mines seem to have geared into action after a draft report by the Comptroller and Auditor General of India (CAG) on allotment of coal blocks without auction was leaked to the media. The draft report reportedly states that the Centre has extended undue benefits to commercial entities and incurred a loss of thousands of crores of rupees due to non-auctioning of coal blocks since June 2004. That year the Union coal ministry introduced the concept of competitive bidding, but it remains unimplemented. At present, the ministry allocates coal blocks to captive users like thermal power plants and steel plants.

After the CAG report was leaked, several documents have surfaced on the website of the Union mines ministry. One of the documents states that the ministry had amended the Mines and Minerals (Development and Regulation) Act of 1957 (MMDR) in September 2010, allowing auctioning of coal blocks through competitive bidding. Public sector units and the 17 power plants under the Ultra Mega Power Project scheme of the Centre will remain exempted from the bidding process of coal block allocation. Another document shows it took almost two-and-a-half years to notify the amendment. Passing the buck to the coal ministry, a mine ministry official says, “The coal ministry took a lot of time to formulate the rules under which auctioning would occur.”

The Auction by Competitive Bidding of Coal Mines Rules of 2012, recently posted on the website of the Union coal ministry, make the Centre responsible for identifying coal bearing areas, earmarking them according to different end-uses and inviting offers for competitive bidding. The government will also fix a floor price for blocks that will be auctioned and set a fixed amount for blocks that will be not be auctioned. The proceeds of the deal will be transferred to the respective state governments, state the rules.

The incident comes close on the heels of a landmark Supreme Court judgement on 2-G spectrum on February 2, which questions the Union government’s policy of giving away natural resources such as communications spectrum and minerals by allocating it to various government or private entities, without holding auction or following market-driven mechanisms.

Despite calls for competitive bidding, the Centre has been putting pressure on Coal India Ltd (CIL), the largest coal mining company in the world, to sign fuel supply agreements (FSA) with 50-odd thermal power companies. Under such agreements, CIL will have to supply 80 per cent of the power producers’ requirement for 20 years at a price 70 per cent less than the international coal prices to meet the power requirements of the country. If it fails to meet the requirement of the power companies, coal ministry officials say, CIL will have to pay a penalty of 100 per cent to them.

The Prime Minister’s Office had asked CIL to sign the agreements by March-end. But it gave the deadline a miss due to opposition from within. Some independent directors of CIL are of the opinion that selling coal at a price lower than the prices otherwise in India and internationally would incur heavy losses to the public sector unit.

Besides, says a highly placed CIL official who does not wish to be named, the company currently sells 10 per cent of the mined coal through e-auction. To ensure a seamless supply to power companies, CIL will have to reduce the e-auctioned share by 3 per cent, which will result in further losses to the company, the official adds.

However, following a Presidential Directive on April 3, CIL has agreed to sign the agreements. Its officials are now calculating ways to ensure continuous supply to the power companies. After all, it registered just 1 per cent production growth in 2011-12; the production growth was nil the previous year. CIL officials reason that at least 58 coal blocks allocated since 1996 are yet to be exploited by developers.

CIL’s investors are wary of the agreements. The Children’s Investment, a London-based fund management company that owns 1 per cent of CIL and is the second major shareholder of the company after the Government of India, has accused CIL of breaching the trust by willing to sign the loss-incurring agreements. The company plans to sue CIL in an Indian court.