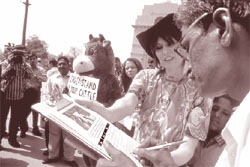 people for Ethical Treatment of Animals (peta), a us -based non-governmental organisation (ngo), has intensified its campaign against the Indian leather industry. It organised a press conference on February 28, 2001 to collect signatures on a petition that urges prime minister Atal Bihari Vajpayee to enforce strict laws related to safe transportation of cattle. Top us departmental stores have stopped selling Indian leather after peta came out with a scathing criticism of the leather industry. India is the largest exporter of leather in the world. Numerous leather traders feel that peta's sustained campaign is an intentional effort to stifle the export of Indian leather. "If peta's campaign proves to be successful, countries like China will capture the international market and Indian leather exports will suffer a major setback. peta cannot launch a campaign against countries like China because of their stringent rules. We are open to such protests. However, we are now cooperating with the ngo and state associations will take action against erring members," says R K Pandey, regional director of the New Delhi-based Council of Leather Exports.