Why mosquitoes are more attracted to some of us than others

According to the WHO, over 500 million people are affected by mosquito-borne illnesses and it leads to around a million deaths every year 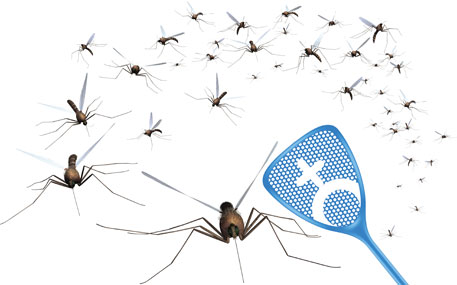 Researches in the past have found that insects like mosquitoes are choosy predators. From genetic factors like blood group to characteristics like colour of clothes and body temperature, a lot of study has gone into what attracts mosquitoes to their prey. But a recent research has tried to understand the extent to which human genes influence attractiveness of mosquitoes.

Body odour is believed to be the single most important factor which attracts mosquitoes to humans. But body odour is at least partly controlled by our genetic makeup.

In a recent study titled ‘Heritability of Attractiveness to Mosquitoes’, with G Mandela Fernandez-Grandon of the London School of Hygiene and Tropical Medicine as the lead author, the researchers have found a sharp correlation between genetic variations and differential attractiveness to mosquitoes The paper was published in the open access journal PLOS One on April 22, 2015.

How the link was strengthened

The trials for this study were conducted on identical and non-identical twins through the Y-tube olfactometer test. To do this, a set up was created where a Y-tube made of flexiglass had mosquitoes entering from the vertical end of the tube and the participants placing their hands at the ends of both arms of the Y tube. This meant that the mosquitoes were free to choose a path towards or away from the odours emanating from hands of the participants.

The behavioural response of mosquitoes was observed using different combinations of stimuli and it was found that the identical twins had a more similar level of attractiveness as compared to non identical twins. The heritability values, or the extent of variation that can be attributed to genetic factors, for attractiveness to mosquitoes was observed to be 0.83 on a scale of 0 to 1 (0 means genes have no effect). The results suggest that the level to which genes are responsible for attractiveness of mosquitoes is at par with levels observed for influence of genes on traits like height (0.8) and IQ (0.5 to 0.8). The paper, however, reminds us that the small sample size and the nature of the variable which was analysed places limits on the precision of the conclusions.

The researchers say that a deeper investigation on the role of genetic variations in attracting mosquitoes could lead to the development of novel insect repellents and individualised strategies for avoiding insect bites.

In the past, several studies have explored why some people are found to be mosquito magnets while others remain relatively unattractive. Carbon dioxide and octenol in exhaled air, amount of lactic acid emitted, body heat, secretor status, moisture, physical movements and the colour of clothing are some factors that lead to differences in attractiveness to mosquitoes.

Mosquitoes are attracted to carbon dioxide that humans exhale and it has been observed that adults are more susceptible to mosquito bites than children due to the larger amounts of carbon dioxide exhaled. Octenol, a chemical found in the human breath, also attracts mosquitoes and forms a potent combination with carbon dioxide in alluring mosquitoes. Additionally, the presence of larger amounts of lactic acid that is emitted through the skin of humans and the production of which is linked with physical activity as well as consumption of certain foods, are other factors associated with an increased attractiveness for mosquitoes. This is why people who sweat profusely tend to be ambushed by mosquitoes. A study of these three factors was conducted in 2007 and was led by D F Hoel. It was published in the journal of the American Mosquito Control Association.

The blood type of a person also plays a role in secretion of different scents. It has been found that mosquitoes are most attracted to Type O and least attracted to Type A.  This was demonstrated in a study that was published in Nature in 1972 (titled Wood and Dore) and has been re-confirmed in later studies.  “Secretor” status is another factor which determines attraction. A “secretor” is a person who secretes the antigens of their blood type into body fluids and secretions like sweat and saliva. Mosquitoes have more affinity for “secretors” than “non secretors”.

Mosquitoes have highly developed thermo sensors that can detect body heat. Warmer bodies are more attractive for mosquitos. Pregnant women have been found to be more attractive to mosquitoes due to a combination of increased body temperatures and carbon dioxide output.

Mosquitoes can observe changes in movements by detecting fluctuations in radiation and use it to approach the human prey. The moisture in one’s breath or on the skin also attracts mosquitoes. Lastly, darker clothing and alcohol consumption are also known to attract mosquitoes. Some of these would be worth remembering as the mosquito menace intensifies in the summer.

According to the WHO, over 500 million people are affected by mosquito-borne illnesses and it leads to around a million deaths every year