Why the budget must focus on rural India

India is staring at a rural economic crisis. If the budget does not spend on rural India, the nation’s growth will be badly impacted 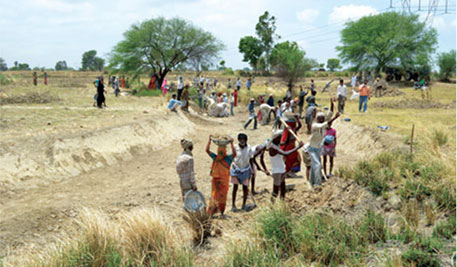 As one travels across India, it is difficult to miss the early symptoms of a rural crisis. Just two years ago, labour shortage and high daily wage were the two main issues people would discuss. Starting from industry associations to a middle class family constructing a new house, everybody blamed the government for the large number of programmes that apparently “pampered” the rural working class, thus precipitating a labour crisis. Many argued that the Mahatma Gandhi National Rural Employment Guarantee Scheme (MGNREGS) empowered daily labourers to bargain better wages. They even got paid for tilling their own land, constructing cow sheds and building traditional water harvesting structures under MGNREGS. Many also argued that cheap food grains had made labourers less desperate for daily wage and that the huge rural spending through other social programmes had virtually deluged villages with government money. On an average, a panchayat covering two to three villages got close to Rs 30 lakh annually between 2010 and 2012. At the same time, there was a boom in infrastructure and real estate sectors in urban areas that generated daily wage jobs by the millions. Rural spending together with this urban boom resulted in an increase in rural wage growth rate by 33 per cent during 2010-12. This fuelled consumer spending in rural areas and majorly contributed to the national growth.

The narrative is changing now with the rural boom turning into a bane. In 2014, rural wage growth dipped by three per cent on the back of slowing infrastructure and real estate sectors. As a result, villages in Uttar Pradesh, Bihar and Odisha are increasingly witnessing return of migrants.

The returning workers have dim prospects of finding rural jobs. They are greeted by a shattered MGNREGS that has been witnessing a constant reduction in funding and a stagnant agriculture sector that has seen negligible public investments over the decades.

The situation is expected to badly hit rural spending which will in turn bring down the national consumption levels. For a country that is already under economic slowdown, this is not good news.

This is where the budget for 2015-16, the NDA government’s first full-fledged one, will have to play a critical role. If Prime Minister Narendra Modi wants this budget to be his first major step towards reviving the economy, it has to treat the rural economic malaise first.

To begin with, the fast decline in budgetary support for the MGNERGS must be arrested right away. The government has argued that rural dependence on the programme is not that high and hence needs to be treated with fiscal rational. But this argument is based on the performance of the programme in a period when boom in other sectors made rural people migrate to urban areas. Now, with these sectors declining, rural communities will need this assurance of wage jobs in villages. MGNREGS’ important role at times of crisis was highlighted during the severe droughts in 2009-10, when the scheme registered its highest job demands.

The budget must also arrest the declining public investment in agriculture. The past two decades, which were the best period for social spending, saw little government spending on agriculture. Now with millions returning to villages, the agriculture sector needs to be prepared to absorb them. This can happen only if farmers receive better assured prices for their produce and their dependency on rains is reduced through capital expenditure.