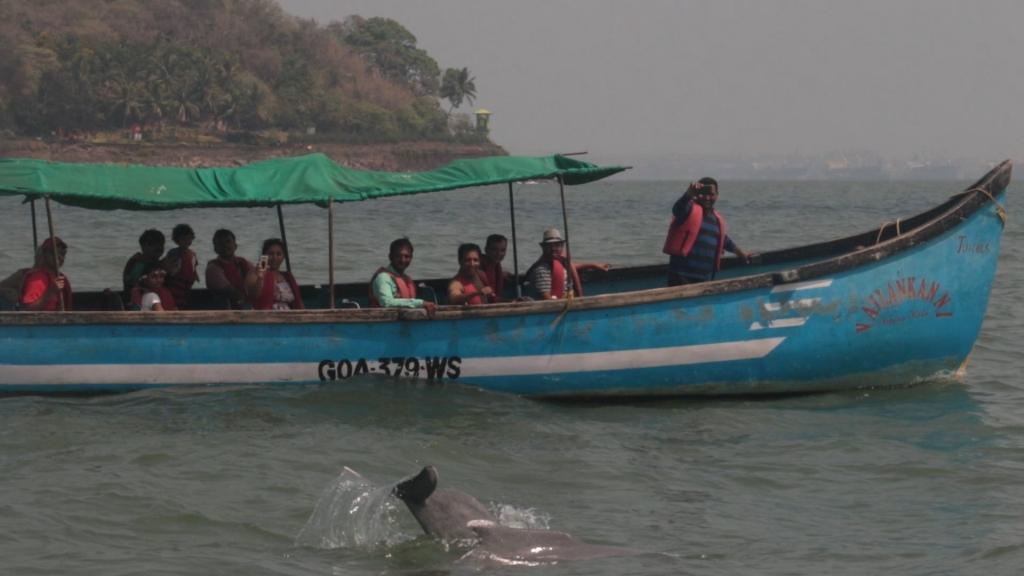 Humpback dolphin is the focal species for tourism in Goa (Credit: Bhaskar Goswami/CSE)

The government of Goa has decided to regulate the activities of tour operators who conduct dolphin-watching trips in its seas. The step was taken to ensure the safety of the marine wildlife in the state.

A notification issued by the Captain of Ports, Captain James Braganza on Tuesday has invited suggestions and objections from stakeholders by July 20.

Non-profits like WWF India have actively lobbied for guidelines on dolphin-watching and for preventing degradation of Goa’s coral reefs. Very recently, Down To Earth published a story on the pathetic condition of marine wildlife and coral reefs in Goa and the negative impact of state’s tourism on them.

Humpback dolphin is the focal species for tourism in the state. Classified as “near threatened” by the International Union for Conservation of Nature (IUCN), it is the most affected species due to tourism. A recent study by WWF India found that dolphin-watching is intruding their marine habitat. Fifty per cent of the boat trips were cutting the dolphin’s path of travel, 28.57 per cent were circling the dolphins and 10.71 per cent boats were chasing them.

Every day, nearly 400 dolphin-sighting trips are conducted in Goa, between 8 AM and 8 PM. This is when the dolphins are actively hunting for food. The new notification states that pleasure trips will now be permitted only between 9 AM to 5 PM.

The problem in Goa is not confined to cetaceans alone. The coastal state has extensive coral reef around Grande Island and St George Island. The corals grow a depth of 4-8 metres and are home to 18 fish species, including parrotfish, butterfly fish, damselfish and others and fauna such as sea urchins and sea cucumbers. Signs of coral degradation have already started showing as  boat tours and scuba-diving have mushroomed around Grande Island.

The coral reef is witnessing algal growth, bleaching and coral breakage, says the WWF report. Untrained boat operators anchor their boats on baby corals, effectively killing them, say the divers who have been in Goa for decades. Due to the lack of proper guidelines, enforcement and accountability, the garbage strewn in seas is further damaging corals. Besides the immense ecological damage that coral degradation can cause, it may also lead to loss of livelihood for many in the state.

A senior official from the Goa Forest Department has earlier said that “there is no coral reef in Goa worth protecting”. The new notification states that norms will be put in place to ensure garbage management, in a bid to avert likely damage to coral reefs near Grande Island in Goa.