‘Gray blanket’ over Australia: Genetics may have aided European rabbit invasion of continent in 1859, says study 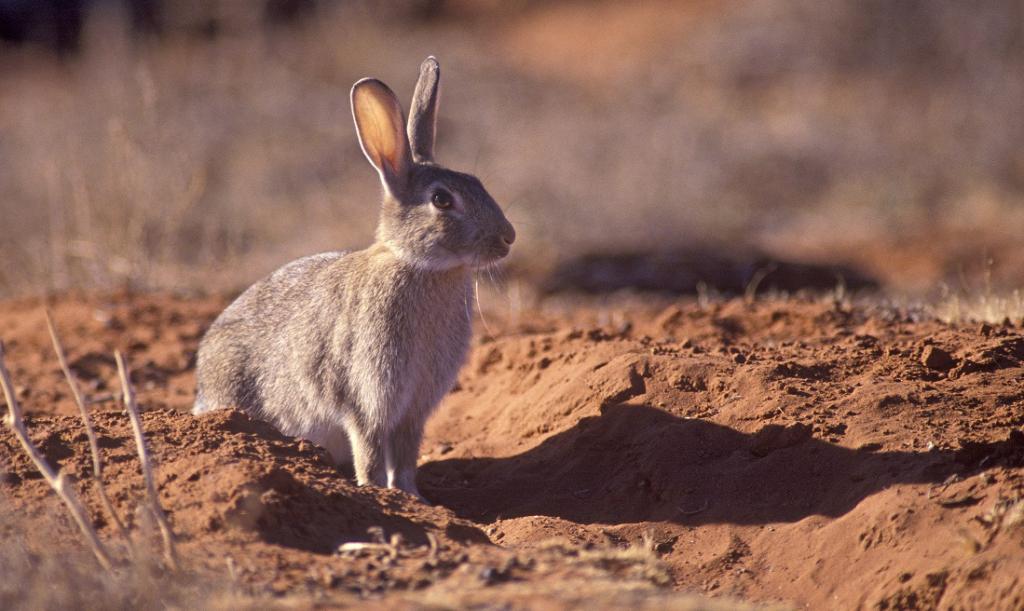 A rabbit in the Australian outback. Photo: iStock

Genetics may have given European rabbits an edge and helped them colonise Australia from the east to the west coast starting 1859, a new study released August 22, 2022, has said.

The European rabbit (Oryctolagus cuniculus) was first introduced to Australia when the First Fleet, a flotilla of British ships, landed in Sydney Harbour in 1788 with the intention of establishing a penal settlement. Five rabbits on board were released in the settlement.

Between 1788 and 1859, there were over 90 importations of rabbits into mainland Australia. But the animals did not spread across the continent.

Then, according to historians, an English settler named Thomas Austin asked his brother in Somerset, southwest England to send him some rabbits so that they could multiply and be hunted.

“On October 6, 1859, Thomas’s brother James sent on board the ship Lightning a consignment of domestic and wild rabbits caught around the family property in Baltonsborough, southwest England.

On Christmas Day of that same year, the consignment arrived in Melbourne with 24 rabbits on board. These rabbits were taken to the property of Thomas Austin in Barwon Park, near Geelong in Victoria,” the study noted.

By 1862, the rabbits sent by James had multiplied and numbered in the thousands. Rabbits spread across the entire continent within 50 years of 1859, at a rate of 100 km per year. This is considered the fastest colonisation rate for an introduced mammal ever recorded.

It is all in the genes

The researchers from the University of Cambridge and CIBIO Institute in Portugal studied historical records alongside new genetic data collected from 187 European rabbits — mostly wild-caught across Australia, Tasmania, New Zealand, Britain and France between 1865 and 2018.

They wanted to know:

“We managed to trace the ancestry of Australia’s invasive population right back to the southwest of England, where Austin’s family collected the rabbits in 1859,” Joel Alves, lead author and a researcher at the University of Oxford and CIBIO Institute, was quoted as saying in a statement.

“Our findings show that despite the numerous introductions across Australia, it was a single batch of English rabbits that triggered this devastating biological invasion, the effects of which are still being felt today,” he added.

So what was special about these rabbits? ‘Biological invasions’ are often aided by favourable ecological factors. As Europeans spread across Australia, they cleared the land for pastoral purposes and also hunted down native carnivores (such as the dingo).

But the researchers theorised that these factors should have also aided rabbits brought in the over 90 importations before 1859. Hence, they could not have helped the invasion.

The researchers then found that as Austin’s rabbits moved further away from Barwon Park, genetic diversity declined and rare genetic variants which occur in rapidly growing populations became more frequent.

Senior author Francis Jiggins from Cambridge’s Department of Genetics was quoted as saying: “There are numerous traits that could make feral domestic rabbits poorly adapted to survive in the wild but it is possible that they lacked the genetic variation required to adapt to Australia’s arid and semi-arid climate.”

To cope with this, Australia’s rabbits have evolved changes in body shape to help control their temperature.

“So it is possible that Thomas Austin’s wild rabbits and their offspring, had a genetic advantage when it came to adapting to these conditions,” Jiggins added.

“Genetic mutations do give organisms a selective adaptiveness to survive in adverse environments / circumstances. These researchers have found some unique genetic signature in the rabbits through which they would have gained invasiveness,” K Thangaraj from the Centre for Cellular and Molecular Biology, Hyderabad, told Down To Earth.

“Rabbits breed very quickly. In ecology, there is R and K Selective Strategy of reproduction to increase numbers.

Rabbits usually use the R Selective Strategy where the mother gives birth to a large number of offspring multiple times in a year. This helps increase their numbers. Other lagomorphs such as talus-dwelling pikas in the Himalayas adopt a K Selective strategy and do not give birth to more than two to three juveniles annually,” Sabuj Bhattacharya, scientist and research ethics and integrity officer, INSTEM, Bengaluru, told DTE.

Rabbits are one of the major invasive species in Australia threatening native flora and fauna and costing the agricultural sector an estimated $200 million per year.

The study, titled A single introduction of wild rabbits triggered the biological invasion of Australia was published in PNAS.