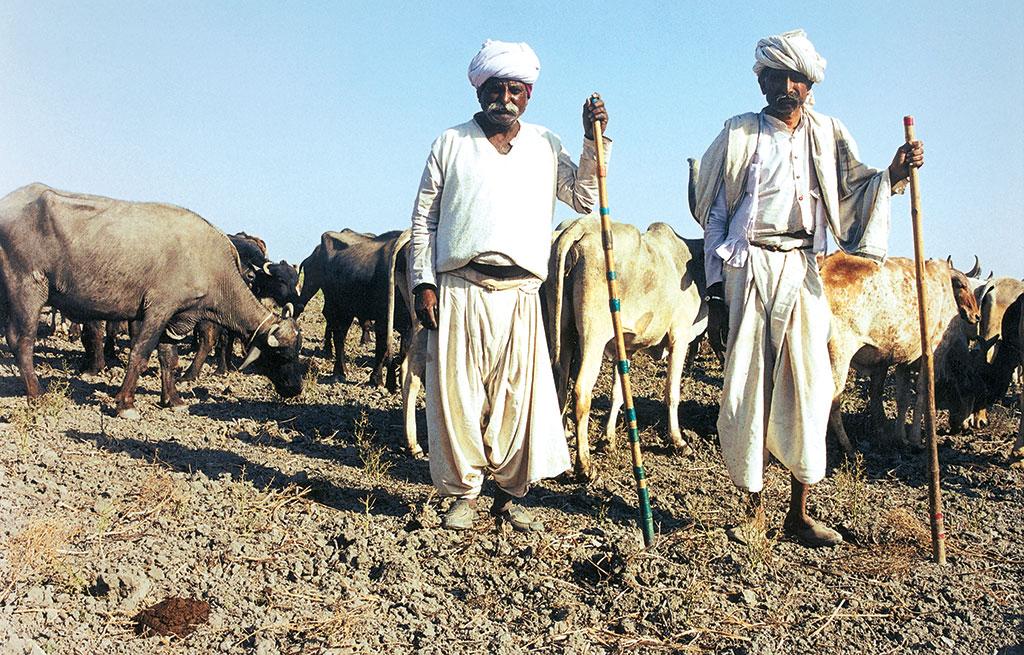 Indigenous cattle varieties have several advantages over exotic breeds that should be promoted (Photograph: Sopan Joshi)

Cows and buffaloes roaming the streets and eating from garbage bins are a common sight in almost every part of India. Even though there have been multiple government interventions, the problem persists.

Most recently, the New Delhi Municipal Corporation, one of the four municipal bodies in the national capital, had announced an ambitious plan to implant chips in cattle with the owners’ information. Using the chip, authorities plan to track down erring cattle owners and fine them Rs 25,000 every time their cattle is found abandoned.

The abandonment of cattle is unfortunate as they are quite an important resource, contributing to nutritional security and strengthening local livelihood. India has over five million stray cattle, as per the 20th Livestock Census released by the Union Ministry of Fisheries, Animal Husbandry and Dairying in January 2020.

There are several reasons for the high share of stray cattle in the country: from neglect of the indigenous populations to excessive focus on crossbreeding in the past few decades. Increased mechanisation and the national ban on cow slaughter have further added to the problem.

In the common parlance, stray cattle include cows, bulls or calves that are abandoned because they are unproductive. They also include low-yield cows, mostly owned by city-dwellers, that are set free to roam about in the open during the daytime. While stray cattle are a traffic nuisance in cities, they also raid crops in villages.

Given the complexity of the problem, simply directing stray cattle towards gaushalas (cow shelters) is not going to be sufficient. This is clear as the Centre has been constantly increasing the number of and support to gaushalas under the Rashtriya Gokul Mission with little success.

Seven of the 10 states with the most number of stray cattle have recorded a rise in their number between 2012 and 2019, suggested the Livestock Census. So evidently, the Centre needs to widen its strategy to reduce stray cattle. For this, it first needs to improve its understanding of cattle, especially of the neglected varieties that have been sidelined by their popular counterparts.

The defined breeds include the 50 most valuable indigenous cattle varieties such as Gir, Sahiwal, Red Sindhi, Tharparkar and Rathi. They constitute almost 20 per cent of the total number.

These breeds are region-specific and have adapted to local climatic conditions, making them hardy to food shortages and climate variations. For example, the varieties found in northern and western states have high milk yield, while those in the southern states are ideal to be used as draft. Breeds found in the eastern states are used for both milk production and draft. Given their high value and low maintenance, these varieties are never abandoned.

The uniform category is the second group, that includes cattle varieties yet to be recognised as a breed, even though they are widely used by the farmers. They are well adapted to local conditions but as they are not properly identified, many of them are crossbred, which leads to poorer varieties. Only these varieties, which account for a small portion of the uniform group, are abandoned. This can be avoided if authorities recognise them.

Crossbred cattle form the third group, which accounts for 21 per cent of the total cattle in the country. These are a product of various failed government-backed programmes started almost 60 years ago to crossbreed popular Indian varieties (Sahiwal, Red Sindhi, and Tharparkar) with the exotic ones such as Jersey and Holstein Friesian.

While the first generation of crossbreed varieties saw an increase in milk yield, this could not be sustained in the subsequent generations. The other challenge was that most varieties failed to adapt to the Indian conditions, making them too expensive to be maintained by small and marginal farmers. Their average lifespan is also less than that of indigenous breeds.

Even in the best farms of the country, crossbred varieties are only able to survive for 3.4 lactations as compared to 9-10 lactations for the indigenous varieties at farmers’ level. As a result, most end up as stray cattle.

The last cattle group is the non-descript breeds, which account for the remaining 49 per cent overall. Cattle in this category usually display low productivity. As a result, they have not even been identified. They form the bulk of the stray cattle, which is unfortunate because they can be made commercially viable if proper research is carried out to determine their potential. 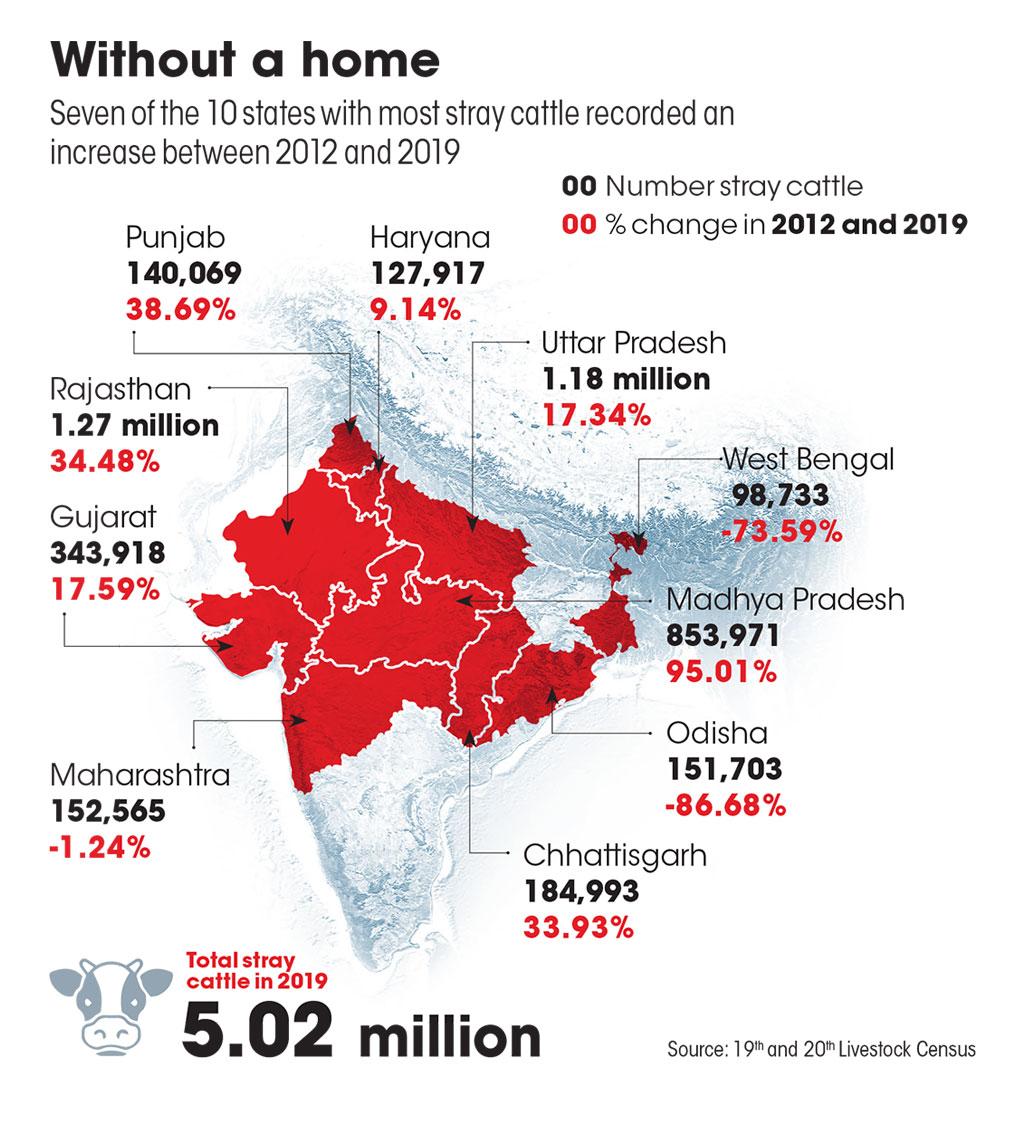 This means more than 70 per cent of the cattle population (crossbreed and non-descript combined) are at high risk of becoming stray cattle. The first step to prevent this should be to stop cross-breeding indigenous and exotic varieties. Research institutes should instead use the semen of indigenous breeds.

The other approach could be reverse crossbreeding, where crossbred varieties are used as foster mothers to produce pure indigenous cows through embryo transfer technology. Increased interventions in this regard, such as developing embryos of indigenous breeds, could help in a big way.

Researchers should also develop sexed semen of indigenous breeds to control the population of male calves that have lower demand. The country already has sexed semen for exotic breeds.

While the inability to remain productive in the Indian climatic conditions is the primary reason that crossbreeds are abandoned, neglect is what ails the non-descript variety. But recent research suggests that proper interventions can improve their productivity.

Indian breeds have an advantage over the exotic ones as they naturally produce A2 quality of milk that is beneficial to humans. The indigenous cow milk also has high levels of some useful components like conjugated linoleic acid, omega-3 fatty acids and cerebrosides.

Researchers should closely study milk types from the indigenous breeds to understand their merits. This would raise the utility of the non-descript breeds.

Besides milk, cattle is also used as draft animals. While this function has reduced with the onset of mechanisation, they continue to be in demand in remote areas. This can be further augmented if research is carried out to design agricultural tools / implements that can be used with draft animals.

The country also needs a policy to promote the use of draft animals in farms. This would help save on petro-dollars and the environment.

Indigenous cattle varieties have several other advantages over the exotic breeds that should be deliberately studied and promoted. The dung of indigenous cattle, for example, has a lot of useful bacteria that can prevent diseases caused by pathogenic strains and can be used as a natural purifier, said a 2015 paper published by Bharti Sharma and Maneesha Singh in the International Journal of Advances in Pharmacy, Biology and Chemistry.

It added that cow dung is a rich source of micro-flora which can be used as probiotics. A 2018 paper published in Springer by S A Mandavgane and B D Kulkarni said:

Cow urine (of indigenous varieties) can be utilised in agriculture as bio-pesticide, yield enhancer and soil rejuvenator, besides curing diseases, controlling mosquitoes, disinfection and fish food. Likewise cow dung is used in energy production via fermentation and gasification processes. The cow dung ash has been used in construction as a partial replacement of conventional material and as an adsorbent.