For the first time, more than 200,000 turtles laid eggs at Gahirmatha on a single day 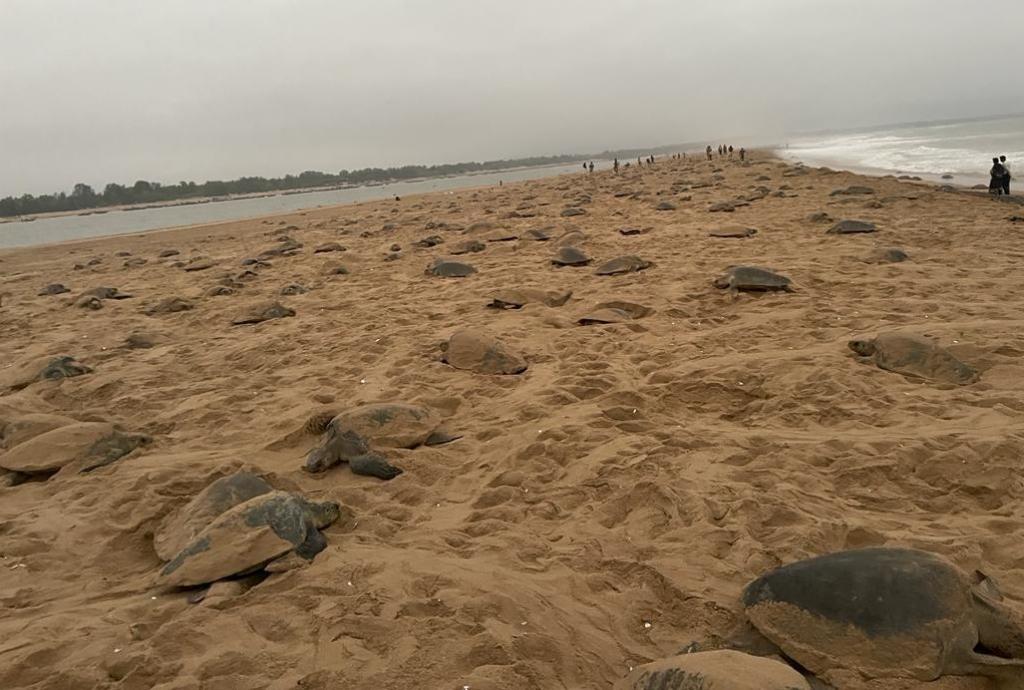 Some 501,157 female Olive Ridley turtles have laid eggs from March 25-28, 2022 at the Gahirmatha Marine Sanctuary in Odisha’s Kendrapara district, known as the world’s largest rookery of sea turtles.

“Nearly 245,000 Olive Ridley sea turtles came ashore for mass nesting at the Nasi-1 and Nasi-2 islands of Gahirmatha marine sanctuary within Bhitarkanika National Park on March 25 night for arribada, a Spanish term for the mass-nesting. That is a record,” JD Pati the divisional forest officer of Bhitarkanika, said.

Nasi-1 and 2 islands are two tiny islands measuring only five kilometres. But the small strip of the islands offer the best nesting ground to the turtles since there are no predators and no human habitation on them.

“The arribada continues for a week. The turtle eggs normally take 45 days to hatch. Tiny hatchlings then emerge and make their way to the sea,” Pati said.

About 30 forest officials including forest guards have guarded the nesting beach and the nearby sea to protect the turtles and their eggs.

The state government has imposed a ban on fishing activities inside Gahirmatha from November 1-May 31 to protect the turtles.

The rookery at Gahirmatha, from Dhamra mouth to Hukitola island, covering 1,435 square kilometres, was declared a marine sanctuary in 1997 by the government to protect the endangered turtles that are protected under the Wild Life (Protection) Act, 1972 as a Schedule I animal.

Each year, adult females crawl from the surf of the Bay of Bengal onto Gahirmatha, to dig nests for their eggs, the size of ping-pong balls.

The female turtles take about 20 years to sexually mature and produce eggs and the baby turtles who were born on the same beach two decades back, are now old enough to come back and lay their eggs.

He added that bright light from the missile test range at APJ Abdul Kalam island near Gahirmatha had been an impediment for the arrival of the turtles.