A sniff to save

It can detect a person buried under six metres of snow. Pervez Cama, who travelled to the Swiss Alps, traces the history of St Bernard, a dog groomed to rescue travellers, and now part of popular culture 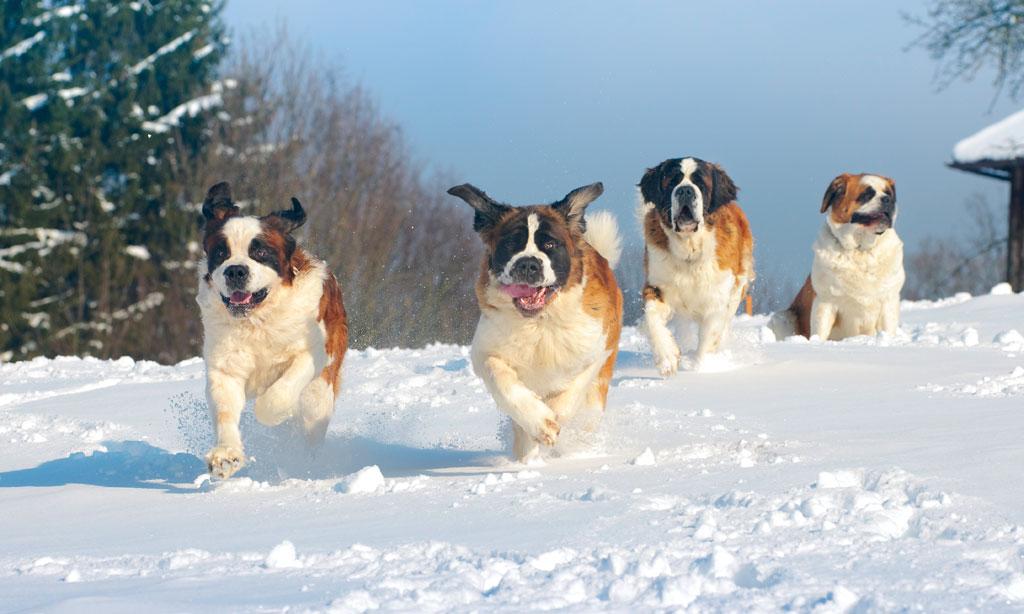 I was on an unusual mission in the snowy landscape of the Swiss Alps: to discover the history and antecedence of one of the world’s most popular dogs, the St Bernard. When we began our ascent, we were enchanted by the quintessential Swiss alpine scenery with its precipitous and thickly wooded hills, massive vertical rock faces and pretty, flower-decked wooden cottages. However, this was a difficult journey in inhospitable environs.

The final stretch of the road up the mountain was long, circuitous and seemingly endless. Every turn revealed a desolate landscape dominated by rocky terrain and boulders. All around, the characteristic jagged peaks of the lofty Swiss Alps kissed the sky. It looked daunting even from the comfortable ambience of our vehicle. Centuries ago, during winter, it would have been forbidding for a traveller to negotiate this treacherous mountain road from Martigny in Switzerland to Aosta in Italy.

The road finally opened out and a simple signboard announced that we had reached our destination—the Col du Grand St Bernard, a pass a height of about 2,470 metres. This is the oldest pass in the western Alps, and importantly, this is also the location of an ancient monastery on the border of the two countries—Switzerland and Italy—where monks live their pious lives. Ahead lies a lake, bordered by sheer stony walls that culminate in a line of intimidating tooth-like peaks, and beyond which, the road traverses the equally intimidating slopes that descend into Italy.

In 57 BC, Julius Caesar was looking for a shorter route from Gaul to Italy, and Caesar’s son, Augustus, ultimately proved triumphant over the belligerent Gallic tribes occupying the pass, crowning his victory by building a colony on the Italian side, called Aosta in his honour. A plaque announces that Napoleon and his army had marched through this road in 1800, enroute to Italy. A large statue of St Bernard of Menthon, the patron saint of the Alps, watches over this bleak landscape. He founded this monastery in 1049.

Such inhospitable surroundings naturally promoted austere living and spiritual leanings amongst his monastic order, and there were God’s subjects to be cared for as the harsh winter conditions caused many travelers to flounder and lose their lives with nine metres of deep snow and temperatures of —30°C. To assist in rescuing and guiding people through dangerous snowstorms, the monks developed a special breed of dog, known today to the world as the St Bernard.

The earliest record of this breed being used at the monastery dates back to paintings drawn in1690. The heroic dogs proved their mettle for about 200 years by helping the monks to save nearly 2,000 people exhausted and stranded in the mountain snows, right up to the 19th century. It is said that they could detect a person buried under six metres of snow. 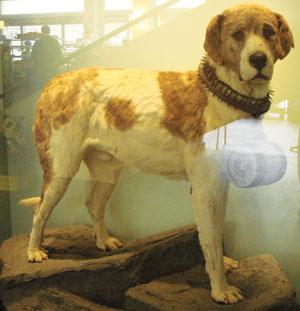 Their massive and strong bodies could bulldoze a path through the snow, their huge paws helped in digging deep and their keen senses led people to safety. The last documented rescue occurred in 1955. A legendary dog, Barry, is estimated to have saved more than 40 lives, and his embalmed body is still preserved in the National History Museum of Bern, Switzerland.

But many dogs lost their lives due to avalanches. Incredibly, as the story goes, the younger dogs received little training from the monks and mostly learnt their search and rescue duties by accompanying the older dogs. Popular legend portrays the St Bernard going to the rescue missions with a barrel of brandy around its neck. But that is a fallacy as the monks used to actually strap packs of food and water around its back to revive travellers smothered beneath the snow.

Reigning as the national dog of Switzerland, the St Bernard dog is believed to have a common ancestor in the Alpine Mastiff, along with the English Mastiff and the Swiss Mountain Dog, a big breed raised by farmers and the pastoral community in Switzerland. The dogs themselves have evolved over the years into their present form after being crossed with several other large molosser type breeds and are related to the mastiff group of dogs. Terrible winter avalanches in the early 1800s obliterated many fine dogs in the line of rescue duty, and the remnants were mated with the New-foundland dogs, which led to the development of heavy fur. 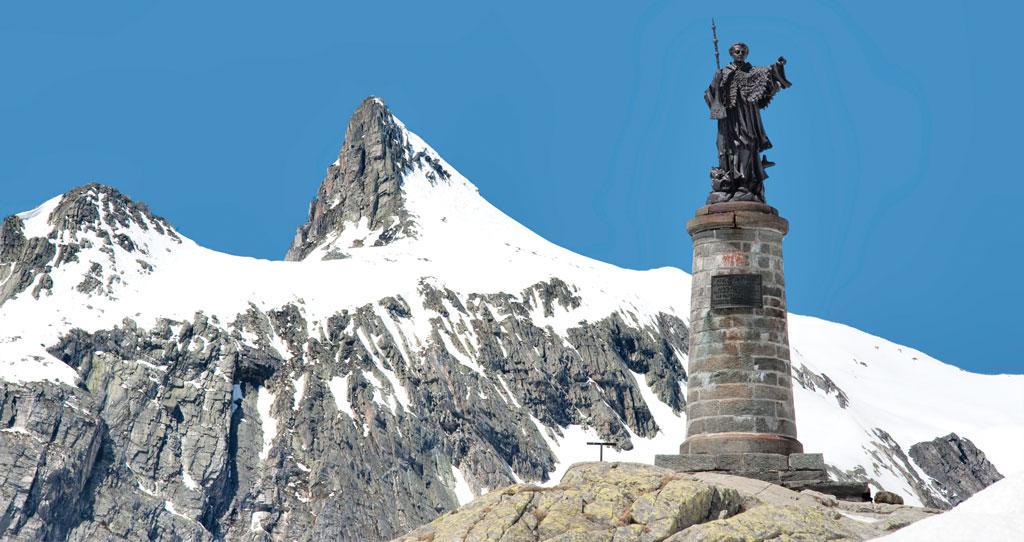 Old portraits reveal that the old working rescue dogs of the hospice looked different and had a smaller size than the current giant dogs, which are the result of breeding designed to enhance the breed’s majestic appearance and attractiveness. Their current dimensions are big and may range upwards of 70 cm in height and between 65 and 140 kg in weight. Modern day St Bernards can be both long and short haired and are popular worldwide because they are family dogs. Aptly nick named “babysitters”, they are eager to look after people, especially children, in their homes. They are gentle and friendly, and have been captured in various movies such as Beethoven and its sequels. The dogs require constant grooming and large spaces, and are known to harbour eye, bone and heart ailments that can run up steep medical bills.

Some monks still reside at the monastery, while others visit it as a spiritual retreat. However, modern transport and a tunnel constructed below the mountain in 1964 made the dogs redundant. So the Barry Foundation in Switzerland purchased the dogs from the monks and established breeding kennels in 2004. The dogs are taken out by their handlers to interact with people and their sociable nature ensures much cuddling and thrills tourists.

But the dogs no longer patrol the frigid paths in the icy temperatures of winter for they are shifted to the ancient Roman town of Martigny during these months. During summer, the lonely crags resonate with the deep throated calls of the giant St Bernards. It was the pass that created the dogs, and today, they have saved the pass from fading into the shadows of history. Their legend still endures.

The author writes on travel and wildlife