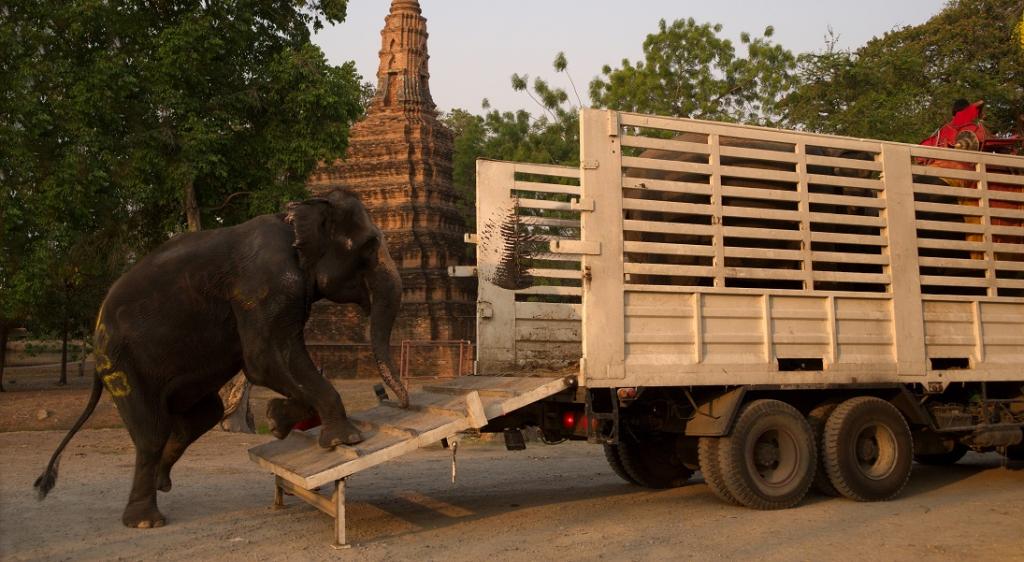 Wildlife activists have raised red flags after yet another convoy of trucks carrying 10 elephants to Gujarat was stopped at Pasighat in Arunachal Pradesh June 7, 2022.

They said this and other recent instances similarly, pointed to a ‘frightening trend’ of more wild elephants being brought into the illegal captive elephant trade.

The elephants — seven male and three female sub-adults — were being transported in 10 trucks with Rajasthan number plates. They were being shipped to the Radhe Krishna Temple Welfare Trust in Jamnagar, Gujarat.

The trucks were stopped by a group of volunteers from the Adi Students Union in the wee hours of June 7, on the suspicion that they were illegally smuggling the elephants.

However, they were later allowed to pass the same day when the drivers presented all valid documents including veterinarian fitness certificates, No-objection certificates from both the Gujarat and Arunachal forest departments and non-commercial donation documents between the elephant owners and the Radhe Krishna Temple Welfare Trust.

The temple in question has housing facilities for 150 elephants, according to the official document permitting the transport that has been accessed by Down To Earth.

The Centre for Research on Animal Rights founded by lawyer Alok Hisarwala Gupta from Goa, has now written to RK Singh and Shyamal Tikadar, the principal chief conservators of forest (PCCF) of Arunachal Pradesh and Gujarat respectively.

The letter, written by Gupta, read:

The entire country stands shocked and outraged, at images and videos from Pasighat of 10 trucks carrying 10 sub-adult elephants from their fertile, lush, tropical, natural habitat of Arunachal Pradesh, to the dry, unnatural terrain of Jamnagar in western Gujarat 3,400 kilometres away.

Gupta added that he feared that “the reactivation of age-old networks, routes and systems of capturing elephants from the wild, passing them off as captive elephants, and trading and transporting them out of the Assam-Arunachal elephant corridors will make a mockery out of the government’s efforts to stop the trade in elephants.”

According to the documents accessed by DTE, a seven-year-old male elephant ‘Kamno’, who was among the 10 being transported, belonged to Chow Molaseng Namshum of Arunachal Pradesh.

But Namshum was granted an OC for Kamno under Section 42 of the Wildlife (Protection) Act, 1972, May 25, 2022. The OC however, did not mention how Namshum came to possess the juvenile elephant.

“The OC, in a worrisome departure from protocol, does not mention whether the elephant was acquired through purchase or succession or if the elephant was born in captivity. The silence on the pathway to the elephant’s acquisition raises legitimate concerns of illegal capture,” Gupta said.

The letter added that Namshum applied to the divisional forest officer, Namsai forest division, for permission to transfer and transport the elephant to Jamnagar May 26, 2022.

This could mean that the OC was only obtained to execute the transfer of the elephant. The clearance for transfer was given by the forest department May 31 under the Wildlife (Transactions and Taxidermy) Rules, 1973.

Gupta further noted that Kamno also had a hole in his right ear. This is part of standard training practice to rope and train a young — mostly wild-captured — elephant used commonly in Assam.

“The facts above lead us to conclude that Kamno was illegally captured from the wild and reclassified as captive, following which Namshum hurriedly obtained an OC and immediately transferred the elephant to the trust in Jamnagar.

“It also remains implausible that Namshum would undertake the administrative trouble of acquiring Kamno only to donate him for free the very next day,” the letter read.

It added, “Arunachal Pradesh remains the only state still handing out private ownership certificates for a Schedule I Animal, when its legality, and also that of gifting elephants, is sub judice and pending in Writ Petition 743 of 2014 before the Supreme Court.”

Taba Taku, chairperson of Arunachal Pradesh Abotani Community Confederation, a group for the socio-economic development of the state’s Tani community, told DTE that this was a serious issue and the translocation of these elephants from their natural habitat to a state 3,400 km away was cruel.

The community filed a First Information Report against the transfer of elephants June 7, suspecting illegal transfers and smuggling.

“The PCCFs of both states should be held accountable for this as elephants are Schedule I animals and because of this translocation, they will have to travel for more than a week in harsh conditions which may affect their health.

“Besides, it is our constitutional duty to protect Schedule I animals and prevent their translocation, away from their natural habitats, where they have adapted to,” said Taku.

India today has more than 2,500 captive elephants, of which over 1,500 are privately-owned, Gupta said. At least 40 per cent of these elephants fall in the category of disabled, sick, abandoned, old and severely ill-treated, that require long-term treatment and care in rescue centres, the letter stated.

It listed several instances wherein many such legal transfers of elephants were made from Arunachal Pradesh and Assam to other states of the country.

It mentioned the case in August 2021, when the Assam forest department seized two trucks carrying two female elephants from Arunachal Pradesh to Odisha. The seizure was upheld by the Gauhati High Court as it found that the transfer was based on a commercial agreement disguised as a gift.

This is because it was in contravention of Section 43 of the Wildlife (Protection) Act, 1972 that bans the sale and any kind of commercial use or transfer of wild animals, their products or trophies.

In yet another incidence October 26, 2021, forest officers in Jalpaiguri, West Bengal, seized a truck with two female elephants, one 18-year-old and another 8-year-old.

Between March 21 and 30, 2022, several local and regional news outlets in Arunachal and Assam have reported seizure, poor upkeep and then the final release of nine elephants being transferred from Arunachal to Gujarat.

The letter said, “The above reports are just a few indicators of a much greater and frightening trend of more wild elephants being brought into the illegal trade in captive elephants.”

Arunachal and Assam cannot once again become suppliers of captive elephants for the rest of the country. And those captive elephants in need of rescue and rehabilitation within Assam and Arunachal must be housed in facilities within the North East, in their natural habitat.

Wildlife activists like Rohit Choudhury have questioned the need for this translocation along with many others.

DTE tried to reach the PCCF, Arunachal Pradesh, regarding the issue of transfer of the 10 elephants and what investigation was done before issuing the OCs to the owners for transfer but has not received a reply yet.