About 10,000 hectares of crop yield has also been destroyed 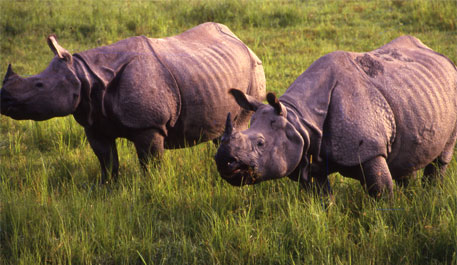 Floods that hit Assam in the first week of June have affected at least 27,000 people in more than 70 villages across the state till now. According to the State Disaster Management Authority (ASDMA), a total of about 300,000 people are facing the wrath of these floods, in 13 districts of the state.

Since May 21, the state authority has been monitoring the situation and releasing a flood report every day. According to the latest report on June 22, River Brahmaputra is flowing above danger level at Nimatighat, a port near Jorhat town in the state.

Relief camps have been opened in Tinsukia, Goalpara, Sonitpur, Kokrajhar, Nongaigaon, Nalbari and Dibrugarh districts. According to the government, till the morning of June 15, only 11 relief camps were operational and about 1,825 inmates were living in them.

Humans are not the only ones who are braving the floods in the northeastern state. Over 2,000 big and small animals have been affected in Lakhimpur, one of the most affected districts. Also, over 9,000 hectares (ha) of crop yield has been destroyed in the state. Of this, 1,532 ha of crop area was destroyed on June 22 alone.

Every year, Brahmaputra floods the national park, thus forcing animals to encroach into human settlements. This leads to man-animal conflict, making animals vulnerable to poaching and road accidents. Organisations like Centre for Wildlife Rehabilitation and Conservation (CWRC), which is a unit of the Wildlife Trust of India (WTI), are involved in educating people about the aftermath of floods in wildlife-rich areas like Kaziranga National Park.

Talking to Down To Earth, an official from Kaziranga Wildlife Society, an Assam-based NGO for wildlife protection, says although CWRC is doing a great job, this is a temporary solution and needs more attention. Mubina Akhtar, an animal activist, believes that though villagers are enthusiastic to learn about these issues, young boys in the villages expect something in “return” for their contribution. The intention of volunteering is missing. “We, as an NGO, cannot offer them much but we keep on appealing to the government to provide a better response team,” she adds.

Kaziranga National Park is famous for its one-horned rhinos that are more vulnerable to poaching during floods. “Unfortunately, about eight to nine rhinos have been poached earlier this year. Their numbers are declining. The last poaching incident was recorded around April 10,” says Akhtar.

According to media reports, a team of International Fund for Animal Welfare (IFAW) and WTI has formulated a work plan to mitigate the human–animal conflict during the floods and to ensure wildlife safety. Conservationists, panchayats, village headmen, local NGOs, civil and forest authorities have attended these meetings and sensitise villagers on how to save wildlife. She is also concerned that once the awareness campaigns are over, the national park would be neglected and poaching incidents would surface again.

Bibhab Talukdar from Aaranyak, a science and research institute that works towards wildlife conservation, tells Down To Earth that flood is a natural phenomenon happening here every year and this year is not as bad as the earlier ones. Also, animals are more vulnerable to poaching but constant police patrolling has kept the situation under control. The official adds that the NGO has worked with school children in Assam to promote wildlife conservation and continues to do so.