Back after 70 years: Narendra Modi releases African cheetahs into Kuno enclosure on his 72nd birthday

Prime Minister asks wildlife aficionados to be ‘patient’ and ‘give the cheetahs some time’, thanks Namibia and South Africa 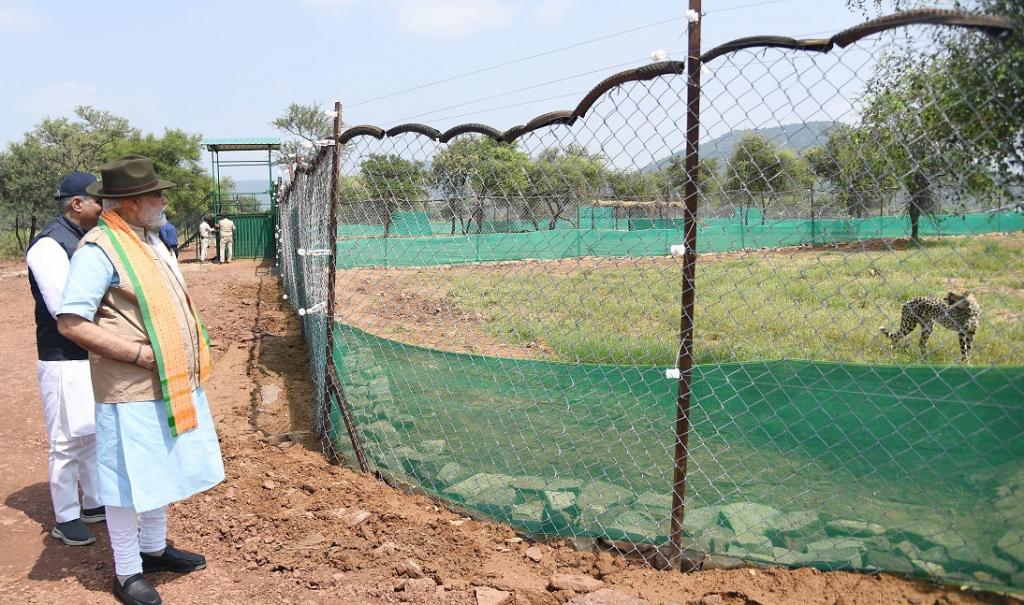 He later said in an address that wildlife enthusiasts would have to patient and give the cheetahs some time to adapt to the new environment before tourism could begin in KNP.

“The cheetahs have come as guests and we need to give them some time to make India their new home,” he said on the historic occasion after releasing two of the eight cheetahs in the 500-hectare enclosure built in KNP at 11:30 am September 17.

Read Down To Earth’s coverage of the cheetah reintroduction

Modi thanked Namibia for sending the spotted cats to India: “Our scientists did extensive research, working closely with South African and Namibian experts and a Cheetah Action Plan was made. India is following international guidelines and trying its best to reintroduce these cheetahs. We must not allow our efforts to fail.”

The eight cheetahs were brought to India in a customised Boeing 747 from Hosea Kutako International Airport in Windhoek, Namibia’s capital to Gwalior, some 200 km from Sheopur. Initially, the aircraft was supposed to land in Jaipur, but this was later changed to Gwalior.

KNP is now home to three male and five female African cheetahs. The Union Ministry of Environment, Forests and Climate Change wishes to establish cheetah metapopulations in the country in the next 15 years.

For this, it is important for these eight cheetahs to adapt well to the new environment in India. Experts say that even if one or two of the five females have a litter in the next six months to a year, it will signify that the big cats are settling down well and have adapted to KNP as their new home.

India will keep bringing more individuals from Africa to ensure a wide genetic pool. India aims to bring 50-60 cheetahs from Namibia and South Africa in the next 10 years. Gradually, as the cheetahs start breeding, more metapopulations will be created in other identified protected areas, like Nauradehi Wildlife Sanctuary.

The Kuno National Park has brought in 238 chitals or spotted deer (Axis axis) from Pench and Narsingarh Wildlife Sanctuaries of the state to increase prey base inside the 500-hectare enclosure. They are planning to bring in around 300 more deer.

“The prey base is sufficient in Kuno. So, we had a choice to either capture chitals from Kuno and shift them inside the enclosure for the big cats or to keep the local prey base intact for future when the cheetahs will be released into the wild.

We decided on the latter and brought in the prey animals from other sanctuaries of the state for the initial period,” J S Chouhan, principal chief conservator of forest, Madhya Pradesh told Down To Earth.

The animals will be closely monitored for the next few weeks to ensure they are acclimatising well to the new environment. After this, they will be ‘soft released’ into the wild. The males will be let out after a period of one to two months, and once they show positive signs of surviving in the wild, the females will be released.

All the cheetahs have GPS collars to help KNP staff monitor them at all times and take them back into the protected area in case they wander outside into the villages.