In battery cages, egg-laying hens are suffocated, debeaked and injected with antibiotics. Their only hope lies with the Delhi High Court, which will hear a case to frame rules to humanise their living conditions 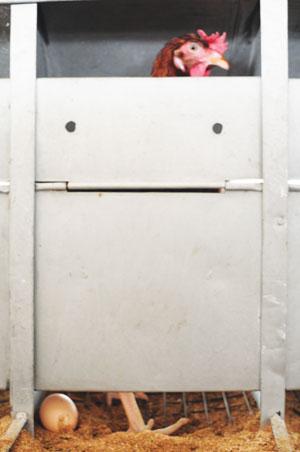 The egg-laying hen is the most abused animal in India. From birth to death, these animals live in cages smaller than an A-4 size piece of paper. They don’t get to spread their wings, perch or exhibit any form of natural behaviour. Their lives are spent in these “battery cages”. These cages give the birds no room to move and they are stacked on top of one another. This heart-wrenching cruelty formed the basis of four public interest petitions, which were filed in the High Courts of Mumbai, Allahabad, Chandigarh and Telangana in 2014-15. These petitions sought the notification of Egg-Laying Hens Rules, 2012—formulated by the Animal Welfare Board of India (AWBI)—and called for a prohibition on the sale of eggs from “factory farms” which use these battery cages.

The cause of egg-laying hens found its way to the Supreme Court in July 2016 by way of a transfer petition, filed by the AWBI, seeking the hearing of these petitions by one forum. Moved by the shocking cruelty, the Supreme Court, on August 5, granted the transfer of the case to the Delhi High Court to “expedite the process of framing of the rules”. The case will be heard in December. This order marked the first step in India’s journey to secure the most basic protection to egg-laying hens. The implementation of the rules will streamline litigation, and hopefully, accelerate the time taken to redress the wrongs that have been committed unchecked since time immemorial by the poultry industry.

India is the world’s third-largest manufacturer of eggs and the industry is growing at a rate of 8-10 per cent annually, according to the Food and Agriculture Organization. This year, the egg production is forecast at 80 billion. Egg-laying hens come from the Red Jungle Fowl, which are indigenous to India and Southeast Asia. These birds fly and prefer to live in areas of dense vegetation. In the wild, these birds would lay 10-15 eggs each year. Years of trait selection by the industry has produced chickens, which are slaughtered for consumption as well as for egg-laying purposes.

The very practice of using battery cages is inherently illegal, and in contravention to the Prevention of Cruelty to Animals Act, 1960. Section 11 (1) (e) defines cruelty as the keeping or confining “of any animal in any cage or other receptacle which does not measure sufficiently in height, length and breadth to permit the animal a reasonable opportunity for movement”. However, given that the fine for committing an act of cruelty is only Rs 50, it is hardly a deterrent to the industry.

Hens and chickens are also routinely given antibiotics. The Centre for Science and Environment (CSE), a Delhi-based non-profit, conducted a study in July 2014, which found six commonly used antibiotics in chicken samples. It is now widely known that consuming these animals leads to resistance to antibiotics that they are fed. Moreover, during floods, chickens die a painful death and there isn’t even the slightest concern for these birds.

Chickens destined for the egg industry are artificially incubated and hatched. Male chicks, which are of “no value” as they will not lay eggs, are killed when they hatch. There are various methods to kill these little chicks—they are either electrified on a kill plate or a purpose-built macerator in which they are ground up alive. After being ground up, their bodies go through a sterilisation process and the remains are converted into feed, which in turn, is the diet of the egg-laying hen.

Hens are also debeaked, which is done using a hot blade. Birds, both in the wild and in captivity, naturally peck to discover their environment and their companions. This pecking becomes difficult in highly intensive commercial farms like battery cages. In most commercial units, traders find it easy simply to cut off the beak. But a hen’s beak has nerve endings and is used to eat and explore. The pain felt is immense, immeasurable and the fear induced is even greater. Hens kept in battery cages develop serious health problems like osteoporosis. Their bones are a reservoir for calcium that goes into the eggshell. The constant egg production leaves their bodies completely lacking in calcium and so their bones become brittle. They are afflicted by fatty liver hemorrhagic syndrome, which is characterised by excess deposits of fat in the hen’s liver and abdomen.

Cage fatigue is another problem faced by hens in battery cages. It is a consequence of skeletal depletion due to prolonged egg production. The skeletal system of the hens becomes so weak that they become paralysed. They may develop a fractured vertebrae as a consequence, and can recover only if they are able to walk outside their cages. As these hens are not let out of their cages, they die a slow and painful death, unable to reach the food and water. When hens no longer produce eggs they are “depopulated”. Depopulation is a process by which each cage is opened and the hens are pulled out. Having perched themselves on the same wire for two years their feet are stuck and often, while “depopulating” them, they are ripped off leaving their feet behind on the wire.

The Egg-Laying Hens Rules, 2012, suggest giving hens enough space to perch, lay an egg in a nest box and be able to stand up and spread their wings. Worldwide, studies have shown that non-cage systems are commercially viable and can be done without increasing the production cost. The AWBI will be arguing the case for the notification of the rules. Given that several nations around the world, including countries in the European Union, have prohibited the use of battery cages, India too must move towards a less cruel non-cage system. Banning battery cages will not only help abandon unconscionable practices that have come to define the poultry industry, but also give a humane face to a nation that has always prided itself on compassion for all living creatures.

The author is an advocate and legal adviser to People for Animals, a Delhi-based non-profit