Co-existence, not Fortress Conservation: Here is why India’s cheetah experiment is unique

Most protected areas in South Africa, home to Africa’s largest cheetah population, are fenced by law; but Kuno is not, which would be a first, say experts 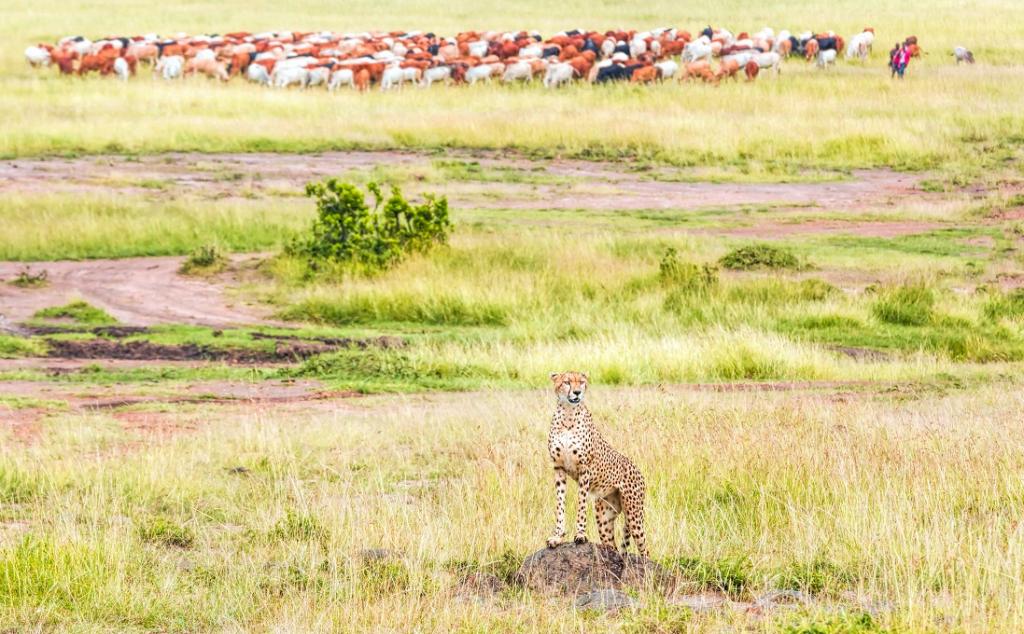 A cheetah in Masai Mara Game Reserve in east Africa, with Masai herders and their animals in the backdrop. In South Africa though, all protected areas are fenced. Photo: iStock

African cheetahs from Namibia will arrive in India September 17, 2022. This is the world’s first intercontinental translocation of a carnivore. It is even more unique because this is the first time cheetahs will be reintroduced in an unfenced protected area (PA).

Twelve cheetahs from South Africa will arrive by next month if the experts who visited Kuno National Park (KNP) are satisfied with the preparations and the two governments sign a memorandum of understanding.

But these reintroductions were all done in fenced PAs as fencing provided safety from human-animal conflict caused due to cheetahs killing livestock, he told Down To Earth. This significantly reduces anthropogenic threats to cheetahs.

He added though that this approach, known as ‘fortress conservation’, was however considered controversial by social scientists, as neighbouring communities were barred from making use of natural resources within these protected areas.

Van der Merwe added that one of the proposed reintroduction sites for cheetahs in India was the enclosed Mukundara Hills Tiger Reserve where the planners of the cheetah reintroduction project anticipated high prospects of success.

The tiger reserve in Rajasthan has only one tigress. So the threat of conflict of cheetahs with tigers does not exist there. But Indian officials, after careful study, finalised KNP which is unfenced.

“Kuno NP will be more challenging, as it is not enclosed / fenced,” he said.

Anthropogenic threats to cheetah survival include snaring for bush meat and retaliatory killings due to livestock depredation.

“The core conservation area of KNP is largely free of anthropogenic threats. But the founder cheetahs are likely to traverse beyond the boundaries of this PA post-release,” van der Merwe said.

This would place them at the risk of human-related mortality including snaring and retaliatory killings by livestock farmers, noted van der Merwe.

He said: “Fencing has proven to be a valuable tool in eliminating cheetahs’ tendency to range over wide distances in South Africa and Malawi, thus allowing for population growth. To date, there have been no successful cheetah reintroductions into unfenced systems.”

Van der Merwe said he hoped locals in and around KNP would have a more tolerant attitude towards cheetahs, given the compensation schemes of the Government of India.

“We do not know how surrounding communities will react to livestock losses attributed to cheetahs, but we do know that India has a functional compensation scheme in place to deal with this potential threat,” he said.

He added that India does not fence PAs. Many Indian reserves are surrounded by buffer zones that allow neighbouring communities to utilise certain natural resources within them. This co-existence approach is considered more favourable by social scientists.

“Success in conservation of species has been achieved using both co-existence and fortress approaches. Our hope is that some of the cheetahs will settle in Kuno.

“If one or two breeding females settle in the core conservation area of Kuno, then we can be sure that they will produce litters of between two and six Cheetahs every two years. In this case, we are winning,” he said.

One successful female Cheetah can raise up to 15 cubs in her lifetime. “If cheetah reintroduction into KNP is successful, it will provide a template for further range expansion efforts for the species,” he added.

MK Ranjitsinh, who drafted the Wild Life (Protection) Act, 1972, and who is also part of the cheetah reintroduction project, told DTE that Kuno was the first choice when the Supreme Court had said ‘no’ to the proposal of reintroducing cheetahs.

It was also the first choice when a survey was done again in 2020 after the apex court gave the green signal.

“We do not want to keep the cheetahs in a fenced area like a safari park. Of all four big cats, there is least chance of human-wildlife conflict with cheetahs as they do not harm humans or hunt livestock. In case they do hunt sheep or goats, we are working to ensure fair and immediate compensation to the locals,” he said.

Ranjitsinh added: “But we have to be ready for casualties as conflict with leopards and due to natural causes will occur. It is inevitable and happens in Africa too.”

He noted that the Mukundara Tiger Reserve was a good site too and the project planners aimed to establish a cheetah population there too in the future. But it was  better suited as a breeding than a reintroduction site as it was fenced.

“If the cheetahs were reintroduced there, people would have said that we are just keeping them in a fenced area instead of establishing a wild metapopulation. This is not our plan. We want them to adapt into the natural surroundings and thrive here, which is possible in Kuno,” he said.