Dead dolphin thrown back into Ganga in Bihar without autopsy 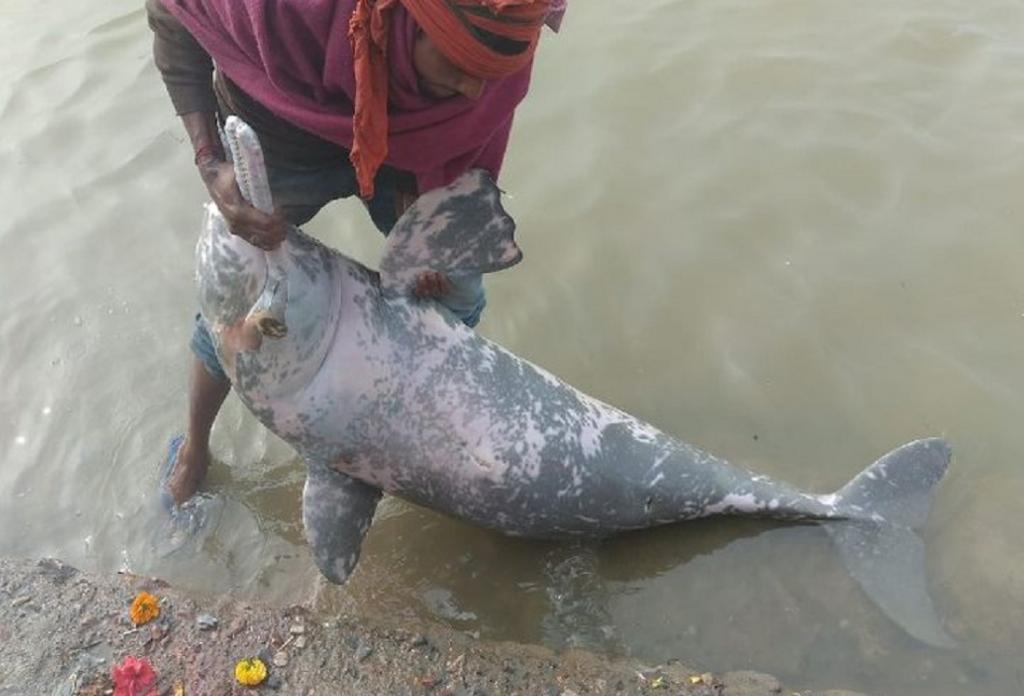 The dolphin carcass at Umanath Ghat in Barh subdivision of Patna district, before it was thrown back into the river. Photo: By special arrangement

The carcass of a Gangetic dolphin was disposed in the Ganga without ascertaining the reason of death of the marine mammal that is supposed to be highly protected.

“If a dead Schedule I animal like a Gangetic dolphin is found, it is the duty of the forest department to take possession of the carcass for conducting a post mortem examination to find out the cause of death,” Gopal Sharma, regional head of the Zoological Survey of India, Bihar and Jharkhand, told this reporter.

The carcass was found floating at Umanath Ghat on the Ganga in the Barh subdivision of Bihar’s Patna district by fishers December 10, according to the police.

Local people soon informed the Sub Divisional Officer (SDO) and the cops about the incident. But when no one from either the forest department or the police reached the spot, some people threw the carcass into the river.

The Gangetic river dolphin is India’s national aquatic animal. It is a Schedule I animal under the Wild Life (Protection) Act, 1972. It has been declared an endangered species by the International Union for Conservation of Nature (IUCN).

The dolphin is found in India, Bangladesh and Nepal. It is blind and finds its way and prey in river waters through echolocation. Bihar is home to around half of the estimated 3,000 Gangetic dolphins in India.

However, this incident raises many questions about the much-hyped Gangetic dolphin conservation programmes being carried out in Bihar by the state government.

Under the Wild Life (Protection) Act, special instructions have been given on how to deal with Schedule I animals, Sharma said.

There are provisions of a three-year jail term and a fine of Rs 3,000-25,000 for possession of any body part of a Schedule I animal. “The forest officials are accountable and responsible for this,” he said.

Sharma noted that this was the first reported death of a Gangetic dolphin this year. Dolphins are frequently targeted by poachers for their skin and oil and also because of the high demand for their meat and fat.

However, in recent years, dolphin killings have been checked to some extent due to conservation and awareness.

Sharma said prima facie it appeared that the dolphin had died three days prior to being found. But the cause of its death was not clear. There was a mark of injury on the neck. Dolphins are usually injured by motor boats. They are also injured and die due to the use of fishing nets.

“In this case, as the forest department failed to conduct a post mortem, it would be difficult to ascertain the cause of death,” Sharma said.

Patna Divisional Forest Officer (DFO) Ruchi Singh did not respond to calls by this reporter.

However, Prabhat Kumar Gupta, additional principal chief conservator of forest (wildlife) said, “It is true that a dolphin was found dead and the Patna DFO got information about it from local administrative officials. She has sent a team including a veterinary doctor and a forest official to the site. But by the time they reached, some locals had already thrown the carcass into the river water. A post mortem could not be conducted.”

Gupta said the team had tried to search for the carcass but had failed as it had disappeared into the river water.

“The department has instructed the DFO to enquire into the cause of death by talking to local people and fishers,” Gupta said.

Barh SDO Sumit Kumar admitted he had been informed about a dead dolphin near the Ganga. “I was told that blood was coming out from its mouth and its upper body had decomposed,” he said.

Sharma pointed that RK Sinha, ‘India’s Dolphin Man’, used to remind him that the presence of dolphins was a sign of a healthy riverine ecosystem.

Dolphins prefer water that is at least five to eight feet deep. They are usually found in turbulent waters, where there are enough fish for them to feed on.

Gangetic dolphins live in a zone where there is little or no current, helping them save energy. If they sense danger, they can dive into deep waters. The dolphins swim from the no-current zone to the edges to hunt for fish and return, Sharma recalled.

The Gangetic river dolphin is one of four freshwater dolphin species in the world. The other three are found in the Yangtze river in China (now extinct), the Indus river in Pakistan and the Amazon river in South America.